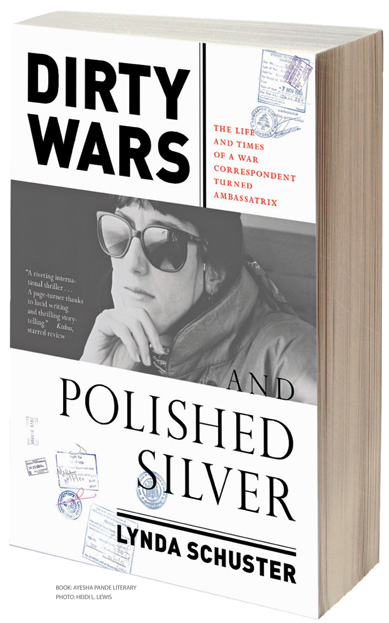 From working as a foreign correspondent covering conflict to entering the rarefied world of serving as a U.S. ambassador’s spouse, Lynda Schuster’s new memoir “Dirty Wars and Polished Silver” pulls back the curtain on two exciting, challenging ways of life.

Schuster, who grew up in 1970s Detroit before journalism and then her second husband took her around the world, said her memoir is two books in one, taking stock of both her life as a reporter and as a diplomat’s wife. “On a very personal level, it was an attempt to make sense of one’s life,” she told The Washington Diplomat.

After graduating high school, Schuster reported on the frontlines of conflicts around the world for outlets such as The Wall Street Journal and Christian Science Monitor. In the 1980s, she covered uprisings in Central America and a financial crisis in Mexico. Her first husband, a fellow journalist, was killed just 10 months after their wedding by a landmine on the Honduran-Nicaraguan border.

“Now, you’d think an experience like that would give one pause. Which it did, especially after my editors very thoughtfully sent me to recover in Beirut, which was then in the midst of a civil war,” Schuster recounted during a July 19 book discussion at D.C.’s Politics & Prose Bookstore. “That was followed by a stint in South America and then in South Africa, where I was targeted by assassins while covering the final throes of apartheid.”

But then she met her second husband, Dennis Jett, a career Foreign Service Officer, and she reasoned that she could “trade in my reporter’s notepad for the pillbox hats and little white gloves, but still write about the world and live a life of adventure.”

Jett left the U.S. Foreign Service for academia after a career that lasted 28 years and covered three continents in which he served as the U.S. ambassador to Mozambique and Peru. He is now a professor of international relations at the School of International Affairs at Penn State.

“As a journalist, I had some very interesting — to put it mildly — experiences in conflicted areas. And I really thought that becoming the wife of an American diplomat would mean, I hoped, a really safe, boring life. And it turned out to be anything but,” Schuster told us.

Five days before their wedding in Monrovia, Liberia, where Jett was deputy chief of mission at the U.S. Embassy, civil war broke out and the couple had to be temporarily evacuated as rebels closed in on the capital. Years later, during his posting in Peru in the late 1990s, Jett narrowly escaped being taken hostage by guerillas.

Amid the dangers, Schuster was also introduced to the sedate world of life as a diplomatic spouse. She details in her book the two-week training session the State Department required of spouses and its envoys to take, an experience she dubbed “Ambassatrix School.” When she took it, 20 years ago, she said the course was quite a “throwback” — like a charm school for diplomats — and the underlying assumption was that none of the wives had careers, or were willing to throw them aside for the posting. While the husbands received detailed policy briefings on politics and war, “we wives were treated to lectures on such scintillating subjects as ‘Your China Patterns and You!’” she quipped.

“I know for a fact that things have changed a lot,” she said. “However, it’s very much like being in the military. If you are the spouse, male or female, the trailing spouse, it is very difficult to have a career. You have to pick up and change posts every two to three years. It’s a tough life.”

Her time as a journalist abroad, which often meant being invited to an ambassador’s residence for events, made diplomatic life “look very glamorous,” she said. Schuster said she “didn’t realize the price that the spouses pay.”

“And I think most people think of diplomatic life as very glamorous. In fact, as I say, it’s very much like being in the military. And that surprised me a lot, coming from the outside,” she said.

She admits the transition was difficult and surreal, as she went from being a hard-bitten reporter working in slums and refugee camps to “June Cleaver cross-pollinated with Princess Grace.”

Schuster said her most memorable posting with her husband was when he served as ambassador in Lima, Peru, where they lived in an exquisite 22,000-square-foot Spanish-style mansion replete with maids, cooks and a house manager. But, as in her career as a journalist, Schuster found she could not quite escape conflict.

“When we got to Peru, our residence had already been attacked four times by guerillas, and anywhere we traveled, we traveled in a three-car bulletproof convoy with 10 armed bodyguards,” she said. In the 1980s and ’90s, the Tupac Amaru Revolutionary Movement, a socialist rebel group, had staged a series of kidnappings and attacks, bombing dozens of American targets in Lima to fight what it called modern-day neocolonialism. 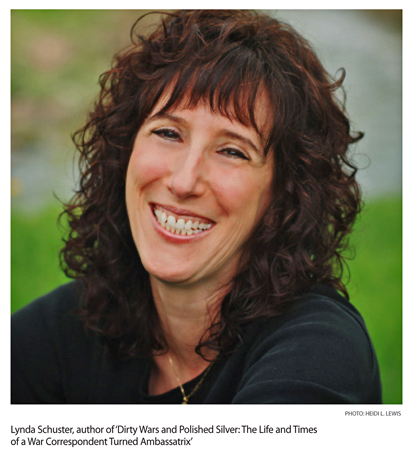 “We had 30 armed Peruvian soldiers that surrounded the residence every night,” Schuster recalled. “But I was assured by the State Department in a briefing before I left that the guerilla problem had pretty much been eradicated and we were going to be safe and I asked my husband, ‘So why do we have our own personal militia taking care of us?’ But he said, ‘Don’t worry, everything is fine.’”

The most dramatic moment came when her husband escaped, by a mere 30 minutes, being taken hostage by armed guerrillas at a party at the Japanese ambassador’s residence, where hundreds of other guests were held captive, some for as long as four months. “I couldn’t believe when that happened,” she said.

So why write the book now? Schuster, who has a 20-year-old daughter, said she wanted young people to “read this book and be inspired to follow their hearts.”

“My message is, it doesn’t matter where you end up. It’s that you actually embark on the journey, as clichéd as that might sound,” she said.

Her memoir also showcases the myriad ways in which the field of journalism has shifted since her time as a foreign correspondent. While she notes some of the changes are positive — the increased number of women working as reporters abroad, for instance — others give her pause.

“Someone asked me at one of the readings that I gave whether a foreign press badge gives me a kind of shield, a sense of security. And it used to, based on the fact that foreign correspondents used to be the only way to get your story out,” Schuster said. “If you were a foreign dignitary, if you were a president, a king, a dictator, a guerilla, the only way you could get your point of view out was through the press. Nowadays, everyone from terrorists to presidents — and I’m not equating the two — have their own Twitter accounts, their own Facebook pages.”

With social media, according to Schuster, “we journalists have ceased to be vital. In many ways, we’re superfluous, and at the worst we’re impediments.”

As for the second part of her two-part book, and life, Schuster said she thinks her memoir also speaks to what is happening in the U.S. diplomatic community today, given what seems to be the diminishment of the State Department underway.

“It’s shocking to me because I went into this as the spouse of a diplomat with a very cynical view of diplomats, as a journalist,” she said. “Because my experience as a journalist was often that I would go out into the field, which was required of my job, whereas often I saw diplomats sort of staying put — and I’m not talking about in warzones, I’m talking about in perfectly calm postings — and they didn’t get out nearly as much as I thought they should to really understand their countries.”

But, she said, “going to the other side, I got to see sort of up close and personal the real work that diplomats do. And they do vital, vital work. And if we’re going to have a hollowed-out State Department, I have no idea how this incredibly vital work is going to be done.”

Schuster now lives in Pittsburgh and is off on a whirlwind book tour in support of “Dirty Wars and Polished Silver.” As she once again takes stock of her life, along with what she dubbed her “rather sardonic tone” taken in the book about her time at “Ambassatrix School” and indeed as a trailing spouse overall, Schuster said she wanted to recognize and write about what that life really entails.

“I saw American diplomatic women abroad who were doing incredibly admirable things when it came to charity, good works, teaching and just acknowledging the difficulties that a spouse would have in this kind of lifestyle,” she said. “I have a great deal of admiration for women who do this. What I write about was my own particular experience, which, having not come up through the ranks, coming from a different sort of career and being thrown into this — it was quite shocking.”