For many Americans, the Middle East is often more associated with conflict and complexity than culture and creativity. But two powerful exhibitions of Arab art at the American University Museum are designed to dispel misconceptions and build bridges.

“I AM: An East-West Arts Initiative Organized by CARAVAN” spotlights female artists from a dozen Middle Eastern countries as they confront issues of culture, religion and social dynamics in a rapidly changing world, both at home and abroad. “Between Two Rounds of Fire, The Exile of the Sea” features a diverse selection of modern and contemporary Arab art that explores the theme of technologies in conflict.

“Between Two Rounds of Fire” draws from the Barjeel Art Foundation, a United Arab Emirates-based initiative established to preserve and showcase Arab art. “I AM” includes the work of 31 women artists who were invited to create a piece specifically for the show in the medium of their choosing, from painting, drawing and collage to photography, digital art and sculpture.

“It is fun to have the two shows here together,” said Jack Rasmussen, curator of the American University Museum.

Rasmussen said it is important to shed light on Arab art as a way of relating to the region’s traditions and its future. “Certainly it’s important that we understand each other, particularly in the Middle East and Arab world,” he said. “This is an opportunity to learn and to engage.”

While both shows deal with Arab art, they are distinct and deal with vastly different subject matter. “Between Two Rounds” explores conflict but more abstractly, looking at the mechanisms of power and divisions between people and societies. “I AM” emphasizes the role of women artists, understanding and peacebuilding — and both in substance and presentation, is the more tangible of the two. 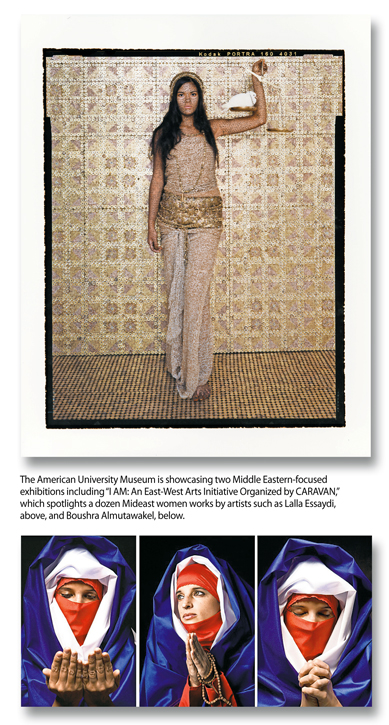 Rev. Paul-Gordon Chandler, founding president of CARAVAN, the nonprofit that organized “I AM,” said the aim of the exhibit is to highlight the significant contributions Middle Eastern women have made to society, both locally and globally. “Often they are only seen as being suppressed and restricted,” he said. “This exhibition is about challenging widely held stereotypes regarding Middle Eastern women by visually celebrating their achievements and central role as peacebuilders.”

Chandler, an Episcopal priest who has worked largely in North Africa and the Middle East in Muslim-majority nations, added that the exhibit is a reminder to “not make assumptions about people, and that wide-ranging generalizations can be dangerous.”

At a Sept. 7 panel discussion at the Middle East Institute featuring three artists from “I AM,” the women talked about their inspiration and back stories. For example, Helen Zughaib, a local artist born in Beirut, incorporates the abaya (a traditional female robe) in her work to challenge the perception that the garment is oppressive.

Alia Ali, an American born in Austria with Yemeni and Bosnian roots, challenges notions of identity through her use of newspapers, which she sees as a form of truth-telling and a source of labels that make people victims and hopeful all in one.

Meanwhile, self-taught painter Lulwa Al-Khalifa of Bahrain pointed out that not all Middle Eastern art has to have a deeper political or social message, and, like other artists around the world, women from the region often create art for art’s sake.

In contrast, the works from the Barjeel Foundation delve into conflict on various levels — within the region, society, the world and the individual. People are coming to terms with the history of the region, Rasmussen explained, and the show is a wide-ranging reflection of that discover, touching on how language, memory, geography and identity create and perpetuate conflict.

“This is a great opportunity. It’s a kind of in-depth look not to be had very often in Washington,” Rasmussen said of both exhibitions. “For the most part, this territory hasn’t been covered by many museums. It’s an exciting region artistically that shouldn’t be ignored for many different reasons.”


Between Two Rounds of Fire, The Exile of the Sea

I AM: An East-West Arts Initiative Organized by CARAVAN