US Deputy Secretary of State Wendy Sherman says the Iran nuclear deal—formally known as the Joint Comprehensive Plan of Action (JCPOA)—is not dead.

Negotiations to revive the deal Iran signed with world powers in 2015 have been ongoing since February, with little indication that a new agreement will be reached. But Sherman believes there’s still a chance.

“I think there is a very viable agreement and Iran just has to say, ‘yes’,” said Sherman, explaining that internal politics are likely at play over who is truly the nation’s current supreme leader. “As best as we can tell, they can’t come to a decision.”

Sherman made her remarks at a live sit-down interview July 12 with Barbara Slavin, director of the Future of Iran Initiative and a nonresident senior fellow at the Atlantic Council, at the International Student House.

According to Sherman, it’s in Iran’s best interest to make a deal.

“They would get sanctions relief. They could improve their economy and sell their oil again and the world needs the oil, so they could get a good price for it. It’s all in their interest to do this, but they’re having a very hard time getting consensus,” she said. “The European Union, the French, the Germans, the British who have negotiated this deal, along with Russia and China, all want this deal.”

Sherman’s talk with Slavin took place on the eve of President Joe Biden’s trip to the Middle East. Slavin asked the State Department official why Biden was traveling to Saudi Arabia and meeting with the very people responsible for killing Washington Post columnist Jamal Khashoggi in 2018.

“[Biden] is going on this trip to increase the potential for stability in a very often unstable part of this world,” Sherman answered. “When the Middle East is unstable, it sort of perforates out into the rest of the region and into the world.”

The ambassador appeared relaxed and upbeat, often cracking jokes, as she and Slavin spoke.

Sherman’s advice: ‘Never miss a chance to take a risk’

Sherman, 73, talked about her ascent to the No. 2 post at the State Department—the first woman ever to occupy that position—from her role as a domestic policy advocate on Capitol Hill, thanks, in part, to a friendship she struck with Maryland’s former Sen. Barbara Mikulski, who was in Congress from 1987 to 2017. 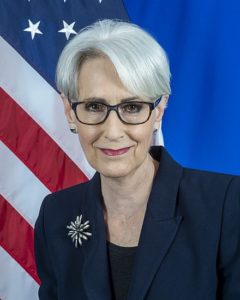 At age 30, Sherman became Maryland’s first director of child welfare. In that position, she supervised foster care, adoption and institutional care, as worked to fight child abuse and neglect. She and Mikulski became fast friends; the politician surprised her one night by joking that she should become her chief of staff. Sherman took the bite.

Sherman ultimately entered the international scene and never looked back when Secretary of State nominee Warren Christopher invited her to head the department’s Bureau of Legislative Affairs. Sherman says she candidly warned Christopher that she knew nothing about foreign affairs, but everything about Washington.

“Never not take a risk. Never miss a chance to take a risk,” she advised the many students in attendance.

When a Harvard College student asked what keeps her up at night, Sherman joked, “joint pain,” but went on to share more sobering thoughts.

“There is a staggering amount of uncertainty in the world right now. I think everyone feels like they have PTSD all over the world,” she said, naming economic fears and doubt that the pandemic would ever end as major concerns. “There is profound uncertainty. People do not know where to put their feet down right now. So that worries me most.”

Sherman closed with an impassioned plea to the “budding diplomats” in front of her that the future is in their hands. She reminded the students that one-third of the world’s population lacks the same internet access on which they themselves rely on so heavily.

“There is so much to do to ensure peace, prosperity and equality for all,” she said. “But it is the young people here who I count on to end that uncertainty; to create a world where citizens all over the world, wherever they are, can prosper.”