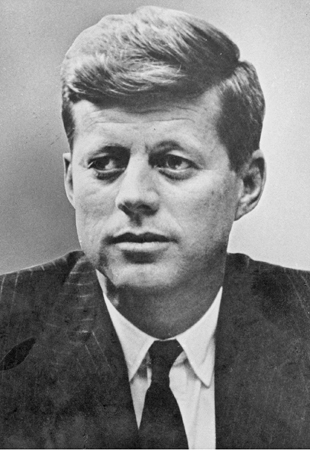 Senator John F. Kennedy would not recognize the modern U.S. Senate — its frequent filibusters, fierce partisanship and increasingly homogenous political parties in which few conservative Democrats or liberal Republicans, or moderates for that matter, can be found. The Senate of 2013 is far different than the Senate in which Kennedy served from 1953 to 1960.

But Kennedy would surely recognize the political aspirations of a number of senators who appear to be considering a run for the presidency in 2016: Republicans Marco Rubio of Florida, Ted Cruz of Texas and Rand Paul of Kentucky, along with Democrats Amy Klobuchar of Minnesota, Kirsten Gillibrand of New York and Elizabeth Warren of Massachusetts. Kennedy would spot the ambition in their eyes, their impatience with the desultory pace of the upper chamber, their evident delight in lavish press attention, and their ample self-confidence that they’re as deserving to reside at the other end of Pennsylvania Avenue as the current occupant — or any of their potential rivals.

To be sure, John F. Kennedy’s political career was fundamentally different than any of these possible presidential aspirants. Kennedy was a celebrated World War II hero who spent six years in the House of Representatives and nearly eight years in the Senate before reaching the White House. He was more widely traveled, better read and more accomplished than this current crop of presidential hopefuls. But like them, JFK did not view the Senate as his final political destination. Rather, he was determined to use the upper chamber as a launching pad for his White House dreams.

Since John F. Kennedy’s 1960 election as president, only one sitting senator has gone directly from the Senate to the White House: Barack Obama in 2008.

Kennedy — whose assassination 50 years ago is being commemorated this month — knew the Senate had never been an advantageous place from which to win the presidency. Before his 1960 election, only Warren G. Harding, in 1920, had gone directly from the Senate to the White House. And since JFK’s election, only one sitting senator has successfully retraced his steps: Barack Obama in 2008. Even a partial list of those senators who tried and failed to win the White House is long, often illustrious, and spans the centuries: from Daniel Webster, Henry Clay and John Calhoun, to Robert Taft, George McGovern and Edward Kennedy, to recent bids by John McCain, John Kerry, Joe Biden and Hillary Clinton.

There are many theories about why it’s so difficult for a sitting senator to be elected president. Senators cast scores of votes that can be used against them on the campaign trail. They learn a professional language that, while usually understandable on Capitol Hill, is often impenetrable to the general public. The skills needed to be a good senator are different than those of a successful presidential candidate.

“As a general rule, it seems that a man who entirely adheres to the Senate folkways has little chance of ever becoming President of the United States,” wrote political scientist Donald R. Matthews in his 1960 classic, “U.S. Senators and Their World.” This aspect of the Senate has not changed in the last half century.

I believe there is a JFK model of how to use the Senate to win the presidency that Obama adopted in 2008 and that Rubio, Cruz, Paul, Klobuchar, Gillibrand, Warren and other aspirants would do well to follow. Here are 10 lessons JFK could offer on how to travel directly from the Senate to the White House.

While extensive experience in government helps a president succeed in office, it does not seem to help candidates get elected. A peculiar, perhaps even perverse, aspect of American democracy is the endless yearning for something, or someone, new. Windows of opportunity in American politics often open slightly and briefly — and then close abruptly. The senator who decides to wait another four years before running for president can easily become an afterthought by the time the next election rolls around. During the 1960 campaign, JFK repeatedly brushed aside suggestions that he wait at least four more years until running for president. He said he would likely get elected in 1960 or never.

The graveyard of failed presidential campaigns is littered with the remains of senators who were conflicted as to whether their primary responsibilities should be in Washington or on the campaign trail. JFK never suffered from this dilemma. Once he decided to run, he ran hard and didn’t look back. Throughout the 1960 campaign, Kennedy faced more experienced and more highly regarded rivals such as Senate Majority Leader Lyndon Johnson, Democratic Sens. Hubert Humphrey and Stuart Symington, and former Democratic presidential nominee Adlai Stevenson. But while they equivocated and anguished about whether and how to run, JFK pursued the nomination relentlessly for four years.

3) Build support across the country, but also stay strong at home.

JFK dreamed of the White House even before he entered the Senate in January 1953 and he immediately sought to create a national profile. But he also kept a careful eye on Massachusetts. After defeating the incumbent Republican senator, Henry Cabot Lodge, in a campaign in which he accused Lodge of neglecting his home state, Kennedy introduced 300 bills to revive the Massachusetts and New England economy, which he publicized widely and pushed vigorously. He also helped organize regular meetings of New England senators to promote their region. Kennedy won his first Senate campaign narrowly in 1952 but was re-elected in a landslide in 1958, helping propel his presidential campaign.

4) Use the Senate as a credential.

JFK understood that membership in the Senate has carried considerable cachet throughout American history. With creativity and tenacity, a senator can gain national visibility and be seen as an important policymaker. The Senate is still a calling card for being taken seriously by the media and public. A seat on the Finance, Budget or Appropriations Committees gives a senator a reputation for economic expertise while membership on the Foreign Relations, Intelligence or Armed Services Committees confers foreign policy and national security gravitas. JFK pleaded with Senate Majority Leader Johnson for four years for an appointment to the Senate Foreign Relations Committee before finally getting it in 1957. He wanted the seat for both substantive, and status, reasons.

5) Use the Senate as a platform.

Kennedy grasped that while the Senate provides visibility, you must have something interesting to say. He used the Senate as a venue to give wide-ranging speeches and his foreign policy addresses were particularly impressive. They were well written, historically literate, informative and forward leaning. He also wrote op-eds, journal articles, a Pulitzer-prize winning book, “Profiles in Courage,” and a presidential campaign book, “The Strategy of Peace.” Kennedy also took full advantage of his membership on the high-profile McClellan Committee that investigated corruption in the labor movement in the late 1950s. 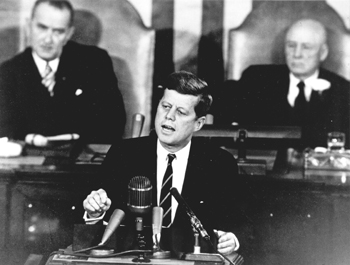 President John F. Kennedy, addressing a joint session of Congress on May 25, 1961, proposes putting a man on the Moon. Before becoming president, Kennedy spent six years in the House of Representatives and nearly eight years in the Senate.

6) Use the Senate as a proving ground.

JFK knew that while a great speech can create buzz in the political world, it’s also important to actually get something done if for no other reason than to show the media and the political establishment that you can deliver. Both opportunity and responsibility pushed him into the battle over labor reform, which was, in some ways, analogous to immigration reform now. The issue was controversial, consequential and fraught with political risks. As the chairman of a key Senate Labor Subcommittee, it fell to Kennedy to write a reform bill. He took hits from all sides: labor, business, southern Democrats, Republicans and most of his political rivals. But he impressed his colleagues with his ability to write complex legislation, move it through the Senate, and then negotiate a compromise with the House. He then hurried on to other less controversial matters.

7) Make sure everyone understands you’re not a Senate “insider.”

If there is one ironclad rule of American politics, it’s that Senate leaders never get elected president. Robert Taft, Lyndon Johnson, Howard Baker, Robert Dole and others tried and failed. Just before the 1960 Democratic convention, Lyndon Johnson belatedly jumped into the presidential race and blasted Kennedy, then the frontrunner, for being a dilettante who wasn’t a serious senator. In a memorable debate before the Texas delegation, Johnson ridiculed JFK as an absentee senator and cited his failure to participate in civil rights debates and to cast a number of procedural votes. But Kennedy turned the criticism back on Johnson. “I want to commend him for a wonderful record answering those quorum calls,” Kennedy quipped, saying he strongly supported Johnson — to remain as Senate majority leader.

8) Look for opportunities outside the Senate to gain exposure.

After exploding onto the national political scene at the 1956 Democratic convention, Kennedy became the party’s rising star and took full advantage of his new status. He received 2,500 speaking invitations in 1957 and gave 150 speeches in 47 states. The next year he received even more political invitations and gave 200 speeches. His Senate work suffered, but he knew the Democratic nomination would not be won in the corridors of the Capitol. “Johnson thinks the campaign is in Washington. It’s not. It’s out here,” Kennedy told an aide during a trip outside of Washington.

9) You can break from your political base and survive but don’t do it often and find other ways to make it up to them.

Kennedy carefully cultivated the constituencies whose support he needed to win the Democratic nomination and supported them on most matters. Though his work on labor legislation angered some of his allies, he explained his position carefully, emphasized their many areas of agreement, and worked even harder and more publicly on other issues that mattered to them.

10) Work hard, enjoy the moment, and pray for good luck.

Kennedy focused on those variables that he could control. He traveled the country relentlessly, lobbied convention delegates, and took full advantage of his family’s wealth to wage a well-funded national campaign. But he was always aware that the outcome of the race would be close. He observed that in politics the “margin is awfully small” between those who win and those who lose. “Like it is in life,” he added. Yet he exulted in the challenge. Shortly after he announced his candidacy, Kennedy asked, “How could it be more fascinating than to run for president under the obstacles and the hurdles that are before me?”

JFK, as a political pro, would warn today’s young senators that the road to the White House is long, exhausting, perilous and rarely runs through the Senate. But it can be done. Senator John F. Kennedy charted his path to the presidency in 1960 and modern aspirants would be wise to study his journey and reflect on his example because it remains relevant, even in today’s vastly different world.

John T. Shaw is a contributing writer for The Washington Diplomat and author of the forthcoming book “JFK in The Senate: Pathway to the Presidency.”