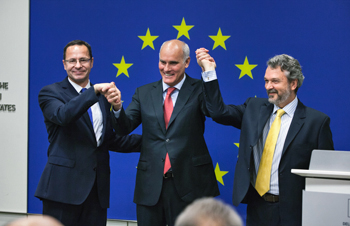 They went to sleep Croats and woke up Europeans.

The transition was met with fanfare. On June 30, 2013, revelers in Zagreb’s Ban Jelačić Square eyed midnight the way marathoners eye the finish line: happy, proud, exhausted and a little skeptical. The end of a long journey in sight, no one wanted to miss the moment when Croatia became the 28th member of the European Union.

Ask locals and they’ll tell you, Croatia has always been European, or had a heavy European influence. They’ll point to the influences of the Ottoman and Austria-Hungarian Empires, and the similarity of the architecture of Vienna, Budapest and Zagreb. In many ways, Croatia joining the European Union was simply a return — of the prodigal child.

But it also marked a milestone after the Balkan bloodbath of the 1990s, with Croatia becoming the second country formed from the dissolution of Yugoslavia to become an EU member state (the first was Slovenia).

Moreover, the accession process itself had been 10 years in the making; Croatia had first applied for membership in 2003, started negotiations in 2005, and began participating in the EU Delegation the year prior to its accession. During that decade, the country passed hundreds of laws, modernized its communist-era economy, and captured wanted Croatian war criminals from the Balkan wars to comply with EU rules.

“The process is designed to ease us in without pains,” said Skunca. “It’s a carefully orchestrated affair.”

But, Skunca admits, “Psychologically, it took us some time to adjust to the EU, and the EU to us.”

Part of that adjustment came surprisingly quickly after Croatia’s accession, when the warm afterglow was disrupted by a bitter dispute over the implementation of the European Arrest Warrant (EAW). EU officials claimed that three days before Croatia joined the bloc, the government voted into law an amendment to the EAW that would restrict the warrant only to crimes committed after 2002. The 2002 date is key. Not only is it the date the EAW replaced the previous European extradition system, it’s several years after the Croatian War of Independence, also known as the Homeland War, fought between 1991 to 1995. The restriction, had it been allowed by the European Union, would have prevented the arrests of those who committed war crimes.

The Croatian law was dubbed the “Lex Perković” after Josip Perković, an alleged Croatian ex-spy chief suspected in a decades-old murder of a Yugoslav dissident in Germany who would have been extradited under the standard EAW. The EU threatened sanctions on its newest member state over the dispute, including the withholding of promised EU funds and preventing further negotiations on Croatia joining the Schengen passport-free travel zone, the next step in the EU process.

Facing the threat of sanctions and what would have undoubtedly been a very public fight with Brussels, Croatian Prime Minister Zoran Milanović backed down and said Croatia would comply with the law by the beginning of the new year.

In a statement, Milanović complained about the uneven application of the EAW across the union, specifically citing the Czech Republic, which will also be subject to the EAW beginning Jan. 1. EU members can request exemptions from the EAW before 2002, but that only applies to states that were in the bloc at the time. Croatia could have asked for exemptions when it was negotiating to become an EU member, but it did not do so.

“We have amended the law but also noticed this system deficiency with which states have a problem, and this discussion is not over,” Milanović stated, adding that the problem would probably be solved with the time limit being rescinded for everyone.

Luka Oreskovic, a Harvard University researcher focusing on European affairs, says that the issue of EAW implementation could have been avoided entirely. “It is a fact that some EU regulations are applied with more rigor in some countries and less so elsewhere,” he said. “However, this is the result of a negotiation process and Croatia did not request the exemption during the process but rather post-accession and was thus, in line with established practices, supposed to comply.

“I believe the eventual compliance with EAW was a good resolution of a problem that could have been avoided,” Oreskovic added. “Internal politics will at times necessarily come at odds with EU laws and thus, such tensions will arise, as they do in other countries, but the ability to resolve them through dialogue and compromise — and the EAW crisis was not resolved through outright compliance of Croatia but rather a compromise — is a necessary part of the EU legislative process.”

Skunca says the wrangling is a necessary, ongoing part of adjusting to the EU, and is not personal. “Enlargement is a living process. As soon as one group of countries moves in, you see the loopholes, and the administration patches them up,” he said. “By default, every next round will be demanding and complicated. It’s a learning process, and it makes the process better and better.”

Now that the issue has been resolved, Croatia can continue its path to full EU integration, including membership in the Schengen area and adoption of the euro, once the country proves it has met qualifying standards in a range of areas, including economic stability.

While Croatia has gained access to market of half a billion consumers, it also becomes more vulnerable the euro zone crisis that has afflicted debt-ridden economies such as Greece and Spain. Croatia also has to overcome its own economic hurdles, with the country of 4.2 million mired in high levels of corruption, an unemployment rate of more than 20 percent, and negative 2 percent GDP growth last year, according to the World Bank. 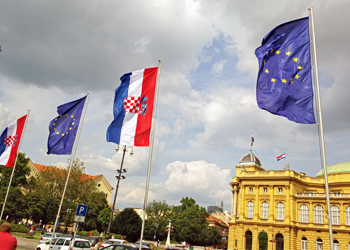 Croatian and European Union flags fly outside the Croatian National Theatre in Zagreb, where revelers came out on June 30, 2013, to celebrate the moment at midnight when their country became the 28th member of the EU.

But Croatia, with a per-capita GDP of more than $18,000, is still better off financially than many of its Balkan neighbors. It’s also already well integrated into the region. Milanović has said Croatia will apply for Schengen inclusion in two years, although the border controls have been removed between Croatia and its EU neighbors Hungary and Slovenia already. “It now takes longer to get through the toll booth on the road from Zagreb to Ljubljana than it does to enter Slovenia itself,” Skunca said. He’s not exaggerating.

Marko Delimar, a professor at the University of Zagreb and a board member of IEEE (formerly the Institute of Electronic and Electrical Engineers), says that since the accession, “EU countries no longer stamp Croatian passports, but we still have to go through passport control. There are fewer or no security checks at EU airports when arriving from Croatia and continuing onto another flight. Also, the immigration lines in most EU countries are now shorter for Croatian citizens as we no longer have to wait in the ‘All Passports’ line.”

But the change in border controls has had other effects, Delimar adds. “Some of our eastern neighbours now wait longer in lines when crossing the border. And tourists from a few countries now need a visa for Croatia, which previously they could avoid in the summer season.”

That exclusivity may have its own appeal, according to Mislav Grgic, vice dean at the University of Zagreb Faculty of Electrical Engineering and Computing. “It is possible that we would attract more EU and non-EU students, for example from Bosnia, based on our new image as a new EU member state,” he said. “However, in this mobility area there would not be some big changes, because we were already included in all major mobility programs, like Erasmus.”

Additionally, the university has eight new projects funded by the EU pre-accession assistance program currently under way. “Regarding EU funds and new grants, we have big expectations from the EU structural funds,” Grgic said.

In fact, roughly $18 billion in financing has been earmarked for Croatia between 2014 and 2020. “The issue is, can we draw, attract, utilize all the funds allocated to us?” Skunca said. “If we can, we’ll do well.”

“We’re the last one in,” he added. “We’ll learn from other people’s mistakes.”

It’s been six years since the last accessions into the European Union. Romania and Bulgaria joined in 2007, and neither country is part of the Schengen, or on the euro. Prior to the 2007 duo, 10 countries joined in 2004: Cyprus, the Czech Republic, Estonia, Hungary, Latvia, Lithuania, Malta, Poland, Slovakia and Slovenia. In the history of the European Union, only Greece was granted membership outside of a cluster of countries, in 1981.

Many of the countries in Eastern Europe are in various stages of membership candidacy, including Albania, Serbia, Montenegro, Bosnia and Herzegovina, Macedonia and Kosovo. That Croatia could become a member without waiting for the next large wave of countries to join the EU is promising, Skunca says, and sends a message to Croatia’s neighbors. “It’s no longer strategic. It’s no longer ‘if’ these countries will join. It’s tactical. People know these countries will join when they’re ready.”

But Croatia will become an important test case to see whether the former states of Yugoslavia are ready for prime time. The EU experienced some regret after absorbing Bulgaria and Romania, both of which are plagued by rampant corruption and organized crime. Since 2004, the appetite for expansion has waned, as member states worry they’re taking on more troubled nations than they can chew, especially in the wake of the euro crisis.

But Skunca says Croatia will be a boon to the bloc. In the 10 years since Croatia first began its long membership process, he said the focus has been on what the EU can do for Croatia. Since the accession, Skunca says the largest difference is a change in perspective.

“Now, more than anything, we’re trying to see what we can add to the EU.”

Molly McCluskey (@MollyEMcCluskey), a contributing writer for The Washington Diplomat, spent the summer living in Zagreb. She has written about Croatia for National Geographic, Bankrate.com and Beacon Reader.