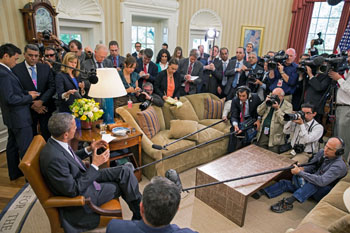 When American journalists and policymakers need expert analysis on countries from Albania to Zimbabwe, they need not look beyond the country’s borders for help. According to a 2012 study by the University of Pennsylvania, there are at least 1,823 think tanks in the United States, accounting for about one-third of the world total, and many of these organizations provide analysis on foreign countries. And there are hundreds or perhaps thousands of area experts at U.S. colleges and universities who are routinely quoted in the press and sought out by government officials for analysis of key foreign policy issues.

Members of the Washington press corps surround President Barack Obama and King Abdullah II of Jordan prior to their bilateral meeting in the Oval Office earlier this year.

Since 1980, the number of think tanks has more than doubled, and in Washington, journalists and policymakers can take their pick from dozens who specialize in providing analysis of international affairs. During the Cold War, there were armies of Soviet experts, but after the Soviet Union crumbled, many gradually rebranded themselves as Middle East experts, and in the years after 9/11, the number of terrorism experts exploded.

In the foreign affairs arena, some of the leading think tanks include the Council on Foreign Relations, Carnegie Endowment for International Peace, Rand Corporation, Woodrow Wilson International Center for Scholars, Brookings Institution, Atlantic Council and the Center for Strategic and International Studies, which is building a new 15,000-square-foot, $100 million headquarters in Washington.

U.S.-based journalists and even American correspondents based overseas rely heavily on these experts and others in academia as sources for foreign affairs-related stories. Experts want to be quoted because it’s good exposure for their think tanks or universities, which are always in fierce competition for grants and donations. But why would journalists, especially those based overseas, consult a fellow American living in the United States if they want to understand what’s going on in a foreign country?

Timothy McNulty is a veteran journalist who has reported from more than 65 countries for the Chicago Tribune and other publications and is now co-director of Northwestern University’s Medill National Security Journalism Initiative. His overseas career predated the internet era, when it was far less convenient for foreign correspondents to contact U.S.-based experts.

“It didn’t make sense to coordinate time zones and there was no Skype, so we relied on local sources,” he said.

But McNulty can understand why so many American journalists, even those based overseas, use U.S. experts from think tanks and academia as sources.

“You speak the same language, literally and figuratively,” he said. “A source in Washington will probably know what kind of story you have in mind. They’ll know where we are in the news cycle in every event. They know what you are looking for and they are happy to provide it. And they are very good at sound bites.”

McNulty said that American foreign correspondents may also prefer American sources because they tend to have short assignments and don’t stay in one place long enough to learn the local language well. And with the unrelenting pace of online media and competition for fresh stories and scoops, harried reporters now have even less time to complete assignments.

“Calling sources in Washington may be a matter of laziness or impatience,” he said. “There are linguistic and cultural barriers in interviewing foreign sources, who may or may not be comfortable speaking English. It’s an additional effort to be made.”

Joe Coleman is a veteran foreign correspondent who worked for the Associated Press in Japan and a variety of other countries and is now a professor at the University of Indiana’s School of Journalism. He said that even if a foreign correspondent knows the local language, he or she may not be comfortable enough to interview a source about a complex issue in that language, especially on the phone.

“In a place like Japan, for example, there are only a handful of analysts who speak English and they tend to show up in stories over and over again,” he said. “Trying to talk about something like antiballistic missiles in a second language over the phone is pretty tough.”

Coleman says that quoting begets quoting, so once a major news outlet quotes a particular source, a host of other American journalists are likely to consult the same person, leaving readers with a narrow range of perspectives on a given topic. And Coleman thinks that U.S. sources may have more instant credibility for readers and editors simply because they are familiar. 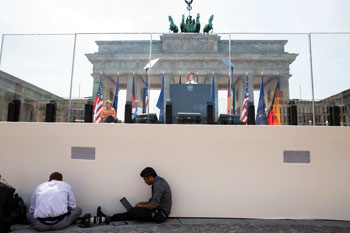 Photojournalists Evan Vucci and Jewel Samad work in the foreground as President Barack Obama delivers remarks at the Brandenburg Gate in Berlin, Germany, in June 2013.

McNulty said that in some countries, particularly less free, more closed societies, it might be very hard for American journalists to find sources who are willing to talk.

“Even before the NSA revelations, not everyone is going to be comfortable talking to an American journalist, especially over the phone,” he said, referencing the Edward Snowden leaks that exposed some of the spying tactics of the National Security Agency.

Matthew Brunwasser has extensive experience as a foreign correspondent, working for The World on Public Radio International, New York Times and a host of other publications. He said that he uses a variety of sources, including local and foreign ones, to give varied perspectives on international news.

“I don’t rely on sources in Washington,” he said. “I think the Washington-based worldview is very limited and specific to people who grew up and worked in that environment and I never did. It’s important to have a local perspective but also a foreign perspective, so I also use sources in Paris and London when it’s appropriate.”

When I’m writing a story on a foreign country, I also try to use a variety of sources, but there are some instances when it’s difficult to find quality sources from a distance. In preparing election-related stories on Egypt and Iran for The Diplomat earlier this year, for example, I tried to find experts who had spent a significant amount of time in those countries and the analysts I quoted are undoubtedly some of the sharpest observers available. But none had any clue that Egyptian President Mohamed Morsi and Iranian President Hassan Rouhani would win their elections. In fairness to those sources, no U.S. news outlet predicted those two would win, and even analysts in Egypt and Iran might have gotten it wrong.

In places like Iran, where many people are afraid to talk to reporters, especially an American one, it’s almost essential to use sources outside the country, but whether they can truly understand what’s going on inside Iran is an open question. McNulty points out that living in a country doesn’t automatically make one a great source either.

“Living in a country doesn’t necessarily mean you understand it,” he said. “Some people exist in a bubble, where they only interact with other foreigners and they never really understand the place.”

Still, McNulty thinks that American journalists need to be leery of using too many American sources in reporting international news.

“We tell our journalism students to resist having an American-centric view of the world,” he said. “If your only sources are Americans, you are filtering the news through American eyes.”

Government officials also rely on experts from think tanks and academia, who are frequently called upon to testify before Congress and prepare reports for congressional committees. But think tanks have evolved from independent, nonpartisan idea factories to a lucrative industrial complex. Some are funded by influential outside entities, intimately involved in stirring up partisan fights, and home to a suspect revolving door of ex-government officials and scholars with conflicting interests.

Quite a few think tanks make no secret of their political agendas. The Heritage Foundation, for instance, was long viewed as the scholarly backbone of the conservative movement. But under its new president, former Sen. Jim DeMint (R-S.C.), it’s pushed an aggressive lobbying and advocacy campaign to defeat both President Obama and fellow Republicans who don’t toe the tea party line. As a result, however, studies and statistics produced by Heritage (and other think tanks with an overt political or ideological agenda) need to be taken with a grain of salt, because the research can be cherry-picked to back a specific argument.

Other potential conflicts of interest are less obvious. Earlier this year, when President Obama nominated Chuck Hagel, who was then chairman of the Atlantic Council, to serve as defense secretary, the public got a rare look into the inner workings of an influential think tank, as the Atlantic Council was forced to disclose its foreign donors. The list contained about 100 corporations and 15 foreign governments, including Qatar, Bahrain, the United Arab Emirates, Saudi Arabia, Kazakhstan, and state-run oil companies such as the State Oil Company of Azerbaijan Republic and Turkish Petroleum.

According to a special report in the Boston Globe on think tanks published in August, senior officials at the Pentagon called on Ernest Bower, an Asia scholar at the Center for Strategic and International Studies (CSIS), to help write a major policy speech Hagel delivered in Singapore in June, despite the fact that he runs a business consulting firm, Bower Group Asia, which has offices in nine Asian countries.

The report in the Globe also highlighted the fact that CSIS is building its new $100 million facility with money “raised by a high-powered collection of former senior government officials and titans of industry representing defense giants Lockheed Martin, Boeing, and Raytheon, along with pharmaceutical conglomerate Procter & Gamble, oil giant Chevron, and a top adviser to the Sultan of Oman, according to CSIS officers and documents.”

CSIS and the other major foreign policy think tanks insist that their donors’ interests don’t impact the analysis their experts provide, but it’s clear that U.S.-based experts play an outsize role in how the American public and U.S. government officials perceive developments in countries around the globe. The quality and objectivity of the analysis they provide are open to debate, but it’s up to the public to do their own research on the people behind the quotes they read.