Home The Washington Diplomat April 2017 ‘Why Presidents Fail’: Too Much Talk and Too Little Action According to Kamarck 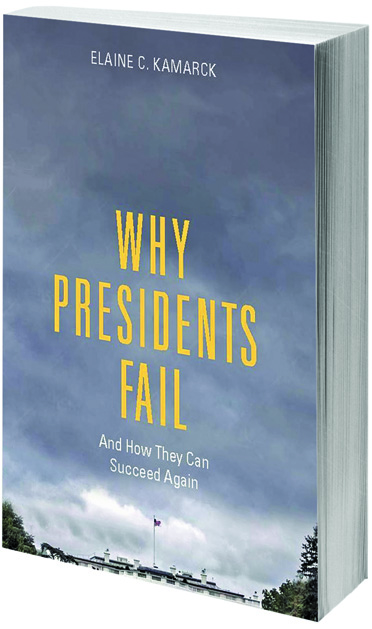 There is now an all-purpose explanation that is often cited by journalists and political analysts when an American president falters: He has lost control over the “narrative” and is unable to communicate his “message.”

Elaine C. Kamarck, author of “Why Presidents Fail And How They Can Succeed Again” takes a very different view. Presidents usually struggle, she argues, because they focus too much on the narrative and gloss over the governments they preside over, making serious mistakes or failing to deliver acceptable services. Too often, presidents are fixated on explaining policies and neglect the more prosaic chore of implementing these policies. Put bluntly, modern presidents talk and travel too much and spend too little time ensuring that government actually works. These failures hurt individual presidents and shatter confidence in the political system they lead.

“Today we face a crisis of competence in the American presidency,” she writes. “Every time a president presides over an executive branch failure, it hurts not just his particular future aspirations and agendas but causes a loss of faith in the entire system.”

Kamarck is a senior fellow in the Governance Studies program at the Brookings Institution and is also the director of the think tank’s Center for Effective Public Management. An expert on U.S. electoral politics and government reform, she has written books on presidential primaries and effective public policy. She is a former staffer at the Democratic National Committee and was an official in the Clinton administration, but in “Why Presidents Fail,” her criticisms are bipartisan, wide-ranging and searing.

Kamarck observes that Americans haven’t always mistrusted their government. In fact, earlier generations of Americans believed the federal government was purposeful, responsive and competent. It was credited with helping end the Great Depression, winning World War II and putting a man on the moon. “Since then,” she writes,” Americans have experienced humiliation in Vietnam, setbacks in Iraq and Afghanistan, a disastrous response to Hurricane Katrina, a ruinous financial crisis and economic meltdown, the botched rollout of Obamacare, and continuing impotence against terrorism. Little wonder there is sentiment out there that the country is on an inevitable and precipitous downward slope that the government can’t do anything about.”

Kamarck argues that presidents are expected to design, communicate and implement policy. In recent decades, however, presidents have become fixated on the communicate part. “The obsession with communication — presidential talking and messaging — is a dangerous mirage of the media age, a delusion that inevitably comes crashing down in the face of governmental failure,” she writes. “After all, management skills are distinct from rhetorical skills and much less interesting — until, that is, their absence causes the entire presidency to crash and burn.”

The president presides over a vast and unwieldy federal government with 2.7 million civilian workers and 1.5 million military personnel. The federal workforce is as large as that of Walmart, McDonald’s, IBM, Kroger, Home Depot and Target combined. This huge workforce is divided between a relatively small number of political appointees who come and go and career employees who work for decades and calmly observe the passing of presidential administrations.

An increasing array of legal strictures and administrative rules severely limit the president’s flexibility to manage this workforce and shift funds without congressional approval. For its part, Congress serves as an intrusive, erratic and often cantankerous 535-person board of directors that oversees the federal government. The cumulative effect of these realities is profound and underappreciated. “The president is in charge of an entity over which he has fairly limited power,” she writes.

Kamarck argues that many of our recent presidents have not had prior experience in the federal government and have not grasped its vagaries, rituals and idiosyncrasies. They have not understood how government operates, where the levers of power are, the importance of persuasion and the remarkable countervailing force of inertia. Kamarck says that while being a governmental innocent may be an asset on the campaign trail, it’s a huge liability once in office. “Modern presidents may get elected because of their ability to inspire us and make us feel good. But they succeed, both in the short term and over the long term, by their actual ability to do good.”

The author does not lack for examples of presidential failures and Kamarck’s book chronicles debacles extending from Jimmy Carter to Barack Obama. These failures tend to fall into one of two categories: presidents who are either inattentive to, or ignorant of, the workings of the federal government.

The mission ordered by President Carter in the spring of 1980 to rescue American diplomatic hostages in Iran was inherently difficult. However, it was greatly complicated by several factors that Carter should have foreseen, according to Kamarck. There was tension between the branches of the military, limited U.S. special operations capacity and no full-scale practice sessions before launching the risky mission. The failure of this rescue attempt deepened the perception that Carter was in over his head. “No amount of ‘spin’ could reduce the magnitude of the failure,” she writes. “Jimmy Carter’s presidency was over.”

George W. Bush’s presidency, Kamarck argues, experienced at least four devastating failures: the 9/11 terrorist attacks, the Iraq War, the anemic response after Hurricane Katrina and the 2008 financial crisis. While the failure to avert 9/11 can arguably be shared with the Clinton administration, Bush received urgent warnings that terrorism was a growing threat and an attack on the U.S. homeland was likely. But he brushed aside these warnings and failed to confront the threats.

“In the run-up to 9/11, we see a government that had the capacity to collect large amounts of intelligence data but was slow to adapt its operations to a post-Cold War world and lacked the capacity to make sense of the information it had,” Kamarck writes.

Hurricane Katrina was a devastating natural disaster in which severe flooding caused breaches in 53 different levees in New Orleans, leaving 80 percent of the city underwater. The government’s response was tragically inept. “In the saga that followed, America looked like a third world country,” she writes, noting that a congressional investigation concluded that rescue efforts after Katrina were characterized by “confusion, delay, misdirection, inactivity, poor coordination, and lack of leadership at all levels of government.” She argues that the Bush administration was focused on terrorism-related disasters, but not on natural disasters. “Had New Orleans suffered an attack by a dirty bomb instead of a Category 5 hurricane, the Bush team would have reacted very differently,” she theorizes. 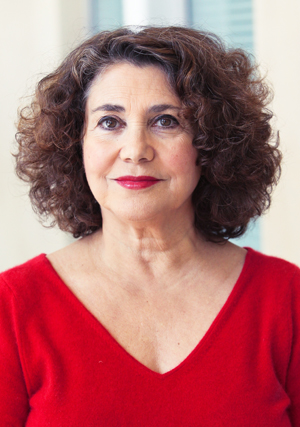 Kamarck excoriates President Obama as a charismatic speaker who was an ineffective manager. She notes that the Affordable Care Act (ACA) was signed into law on March 23, 2010, and the program’s signature website was supposed to be ready for business on Oct. 1, 2013. But it faltered badly and wasn’t up to speed until many weeks later, following a public uproar. She blames inadequate attention to management and implementation for the debacle. “In between the day the bill passed and the day the website went live, health care became a rhetorical obsession for the White House. It was the focus of hundreds of message events and countless meetings on what to say about it. But — and here’s the rub — it did not become a managerial or implementation obsession.”

She says the administration placed the key management responsibility for ACA with the Centers for Medicare and Medicaid Services, an agency that was already struggling to do its other work. “In other words, the agency chosen to create the massive, high-tech website of the Obama health care plan was having trouble managing everything it had to do even before passage of the ACA.”

This failure was an implementation fiasco. It was also a punishing political blow for Obama that weakened public support for him and contributed to Democratic losses in the 2014 congressional elections. Republicans retained control of the House and captured the Senate. This result effectively killed Obama’s agenda on a range of issues including gun control, climate change and job creation.

Kamarck is persuasive about the obsession in Washington and in the White House with political messaging and how the focus on spin often detracts from the challenge of governing — a point amplified by Donald Trump’s Twitter-driven presidency. However, I wish she placed this messaging preoccupation in a more nuanced context. I believe its pervasiveness is closely related to the deepening political polarization in the United States. Obama, for example, did not spend several years traveling around the country holding events about Obamacare for enjoyment, but rather to shore up public support for a program that was under fierce Republican attack and was threatened by repeated GOP efforts to repeal it.

Kamarck’s solutions to the problem of presidential failures are modest and not fully satisfying, especially in a social media-consumed world where the public expects instantaneous information. She calls for Cabinet secretaries to conduct program reviews every four years and also urges the White House to create an early warning system to anticipate failures in government. She also outlines some reforms related to how the nation elects presidents that will almost certainly not occur any time soon.

“Why Presidents Fail” would be stronger if Kamarck had outlined specific techniques on how a president can better manage the federal government and implement programs. Is a stronger White House staff needed? Would a more powerful chief of staff help? What about a “first secretary for government affairs?” Should the White House’s Office of Management and Budget be upgraded or refocused? Perhaps Kamarck’s next book will tackle these and other questions.

Of course, it’s impossible to read this book in 2017 and not wonder about the presidency of Donald Trump. “Why Presidents Fail” does not make one encouraged that the billionaire mogul, for whom messaging and image is everything, will be a successful manager.

Trump never worked at any level of government before Jan. 20, 2017. While he was apparently successful in real estate and reality TV, it’s far from clear he has the skills to make the federal government work for him. Bombastic tweets aside, there is no evidence that he understands the nuances of political power or is even interested in government operations. The learning curve is likely to be steep and it’s unclear that he wants to learn very much.

Additionally, Trump’s fixation on frequent and impulsive communications through Twitter is likely to become more of a hindrance than a help in running the government. While his blunt talk — geared toward shock over substance — propelled him to power and constantly keeps him in the headlines, it’s likely to grow stale and antagonize many, including the several million federal workers who will be needed to implement his policy objectives and manage the everyday business of government. He is already getting a taste of those frustrations with his own botched rollout of a refugee travel ban, the incessant swirl of questions over his administration’s ties to Russia and the gush of leaks pouring out of the White House.

As Kamarck would agree, Trump will ultimately be judged in 2020 by the nation’s overall economic performance and by America’s standing in the world — by concrete accomplishments, not by attention-grabbing tweets.