Home The Washington Diplomat November 2016 Will 44th President Be Remembered as Deporter in Chief or Dreamer? 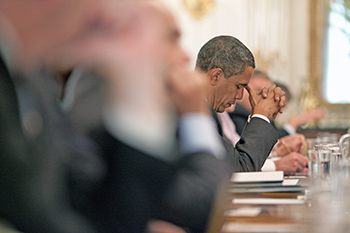 Donald Trump’s vow to build a wall with Mexico brought immigration front and center during the 2016 presidential election and may well go down as one of the more grandiose pledges made on the campaign trail. Trump largely ran on a platform that included promising unprecedented numbers of deportations while his opponent, Democrat Hillary Clinton, would lay out the welcome mat for people whom the Republican billionaire described as drug-runners, rapists and criminals. “And some, I assume, are good people,” he said (also see “Immigration Anchors GOP Candidate’s Foreign Policy Platform“ in the October 2016 issue).

President Barack Obama reacts to a comment during a meeting with members of Congress for a roundtable discussion on immigration reform in June 2009.

Despite Obama’s support for amnesty of certain illegal immigrants, particularly those brought here as children who fall under the Development, Relief, and Education for Alien Minors (DREAM) Act, the truth is that Obama has a very complicated record on immigration and deportation.

In fact, in a recent interview with Bill O’Reilly of Fox News, Trump praised Obama for getting “tremendous numbers of people out of the country.”

During his first four years in office, Obama did just that, overseeing a steady rise in deportations that peaked in fiscal 2012, when more than 400,000 people were deported, according to U.S. Immigrations and Customs Enforcement (ICE). In 2014, Obama was labeled the “deporter in chief” by Rep. Luis Gutierrez (D-Ill.), who said that Obama had deported more illegal immigrants than any other recent president.

At the same time, however, Obama was trying to pass legislation that would revamp the immigration system and allow a framework for undocumented workers to acquire legal status, while beefing up border security.

Among other things, the legislation would’ve provided some of the estimated 11 million undocumented immigrants in the U.S. a legal pathway to citizenship — among them, the parents of American citizens or legal resident children who have lived in the U.S. for more than five years — if they registered with the government, underwent background checks and paid back taxes. It also would’ve doubled the number of border agents and strengthened border surveillance; expanded verification measures to prevent employers from hiring illegal workers; and adopted a merit-based immigration system that weighs professional skills, family relations and work history in the U.S.

But the bill, which passed the Senate in 2013, died in the House, and Obama began using executive orders as a tool to change immigration policies in the country. Violent offenders became a target for deportation, as Obama sought to prioritize limited resources.

“President Obama’s approach to immigration enforcement is really two very different approaches: one for those caught near the border, the other for immigrants found living illegally in the interior,” explained NPR’s Scott Horsley in an Aug. 31 article. “How long an immigrant has been here makes a difference as well. Like others before it, the Obama administration says it doesn’t have the resources or the desire to deport millions of immigrants whose only crime was entering the country illegally. So, it has focused its enforcement efforts on particular targets: namely those caught near the border, those who’ve committed crimes and those who appear to have arrived in 2014 or later.” 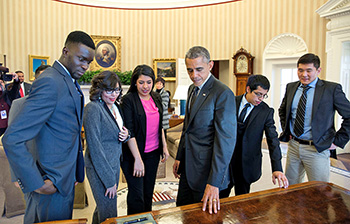 President Barack Obama shows the Resolute Desk to a group of DREAMers, following their Oval Office meeting in which they talked about how they have benefited from the Deferred Action for Childhood Arrivals (DREAM) immigration reform program on Feb. 4, 2015.

As a result, total deportations went down. Recent reports show that deportation figures could hit a 10-year low. Deportations for this fiscal year are expected to be lower than last year’s numbers (235,413), which were the lowest since 2006.

“While total deportations decreased, the proportion of criminal aliens as a percentage of removals increased from 31 percent in 2008 to 59 percent in 2015,” the Hill’s Rafael Bernal reported on Aug. 31.

Despite the scale-back, the title of “deporter in chief” could still be applied to the 44th president and former senator from Illinois. During Obama’s first six years in office, he deported more people than the Bush administration was able to in eight.

“Between 2009 and 2015 his administration has removed more than 2.5 million people through immigration orders, which doesn’t include the number of people who ‘self-deported’ or were turned away and/or returned to their home country at the border by U.S. Customs and Border Protection,” Serena Marshall of ABC News reported in August. Those figures mean Obama has deported more people than any other American president in history.

“Obama’s immigration record was mixed,” Michael Shifter, president of the Inter-American Dialogue, told us via email. “In his second term, he tried hard to achieve serious reform and many were optimistic, chiefly because of the huge role of Latinos in the 2012 election. But in the end he didn’t make progress and was unable to break the political stalemate with Congress on this issue.

“Many immigration reform advocates criticized Obama for waiting until the second term and not pursuing this goal when he enjoyed a congressional majority. They were also disappointed that a president with a progressive agenda emphasized law enforcement and deported more immigrants than any of his predecessors,” Shifter added. “He will also be remembered for significantly beefing up border security measures.”

Faye Hipsman, a policy analyst and California program coordinator with the Migration Policy Institute, agrees that the record number of deportations under Obama will color his legacy.

“Immigration will always be a difficult part of President Obama’s legacy,” she told The Diplomat. “No president has carried out more deportations or dedicated more resources and efforts to immigration and border enforcement, a fact that disappoints many on the left, while others on the right maintain that his administration didn’t do enough to stop illegal immigration.”

Recent comments by Trump show his deportation plan is quite similar to Obama’s. Trump said he would divide illegal immigrants into two groups — the criminals and “everybody else,” who would essentially go through the same process the Obama administration uses to grant legal status.

This strategy is almost identical to the one used by Obama. Under his administration, ICE focused more on felons than families. Trump seemed to acknowledge Obama’s strategy in August, saying he would do “the same thing” but “perhaps with a lot more energy.”

Meanwhile, Hillary Clinton has vowed to revive comprehensive immigration reform if elected, but the acrimonious election — and the strident anti-immigrant fervor it has unleashed — may put any such efforts on the backburner even if she does capture the White House. 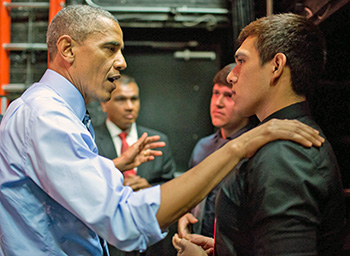 During remarks on the economy in Austin, Texas, President Barack Obama was heckled about immigration by two young men in the audience. After being interrupted again, Obama told the men that he wanted to finish his speech but would be happy to have a conversation with them later. As soon as he left the stage, the president told his staff to bring the two men backstage so he could indeed talk to them about immigration.

As much as Obama has been slammed or, conversely, praised for deporting record numbers of illegal immigrants, he has also focused his energies on protecting certain groups. He turned to his executive powers to defer deportation for those who were brought to the U.S. before the age of 16 (so-called Dreamers). He also sought to expand that reprieve with his Deferred Action for Parents of Americans and Lawful Permanent Residents (DAPA), which would’ve allowed up to 5 million immigrants who are the parents of U.S. citizens or green card holders to apply for work permits and remain in the country.

But a deadlocked Supreme Court put DAPA in limbo after it left in place an appeals court ruling that blocked the plan.

“Obama’s executive order on Dreamers and other efforts were commendable initiatives to protect large numbers from risk of deportation, but much of that work got tied up in courts,” Shifter said.

Some of the fluctuations in immigrant trends, however, were more the result of outside forces than concerted efforts by the president. For example, after the 2008 economic recession, immigration from Mexico flat-lined as fewer workers came to the U.S. looking for jobs. Over the last five years, in fact, more Mexicans have left the United States than entered it, according to the Pew Research Center.

At the same time, in recent years the U.S. saw a surge in illegal immigrants fleeing gang violence and poverty in Central America, particularly unaccompanied minors.

To help curb this influx, the president passed a $750 million aid initiative to reduce violence and spur economic development in El Salvador, Guatemala and Honduras.

“The Obama administration has launched a number of initiatives in Central America aimed at promoting economic and social development and alleviating the tough conditions that force people to migrate in the first place. To date, however, these policies have been limited,” Shifter said. “In sum, the Obama administration has had much more success in deporting and stopping migrants from entering the U.S. than with dealing with the more than 10 million undocumented immigrants already in the country. His efforts were well-intentioned but proved to be politically difficult.”

Hipsman said Obama’s stringent deportation policies early in his presidency will likely leave a bad taste in the mouths of immigration reform advocates, but they may also see some positives.

“For President Obama’s allies, his legacy is likely to be a mix of resentment for his deportation practices with an appreciation for the small and large steps he took over eight years, potentially with the latter winning out,” she said. “For his critics, the legacy will be almost entirely negative, with anger focused on ineffective enforcement and immigrant-friendly policies.”

From Hipsman’s perspective though, the record Obama leaves behind will be largely positive. He tried to set a pathway to amnesty for Dreamers, he challenged a harsh 2010 immigration law in Arizona and fought to pass immigration reform. He failed in some of his efforts, but Hipsman said Obama will be seen as a president who “stuck his neck out” for immigrants and his deportations were aimed at reforming the cause for the better.

“President Obama has … taken many meaningful steps — both high profile and quiet — to improve the lives of immigrants and focus enforcement more narrowly,” she said. “Moreover, the impact of some of his more small-bore immigration policy changes, such as setting priorities for enforcement and introducing reforms to different legal immigration processes, will become more apparent over time.”