Home The Washington Diplomat December 2011 Will It Be Sink or Swim For Blacks’ Oyster Palace? 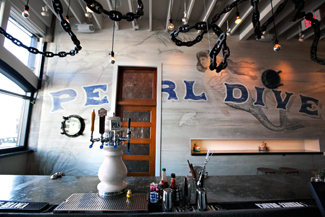 The Blacks are back with their fifth restaurant, continuing with the quality, seafood-driven concept that’s earned Jeff and Barbara Black local acclaim while venturing into new territory: the trendier urban confines of downtown D.C. The husband-and-wife chef-owners behind Black Restaurant Group, responsible for BlackSalt, Black’s Bar and Kitchen, Black Market Bistro and Addie’s, have churned out another gem with a bright future in Pearl Dive Oyster Palace and the separate bar space Black Jack along 14th Street in Logan Circle.

Having hewn closer to the outskirts of Washington, D.C., in suburbs such as Bethesda and Rockville, Md., Pearl Dive marks the Blacks’ first foray into a more up-and-coming downtown locale. Up-and-coming though is a clichéd description of Logan Circle, which in recent years has firmly established itself as a destination in its own right, very much in the youthful bohemian spirit of the U Street or H Street corridors.

Pearl Dive feeds on this energy, while staying true to its traditions. The result is a new hotspot with an established pedigree that boasts a relatively small but strong menu of Southern-inspired dishes, with a focus on Gulf Coast seafood, helpful staff, and an inviting, inventive ambience that melds rustic fish shack with urban chic.

The only ingredient that throws the otherwise successful mix off is space, or rather lack thereof. The buzz that Pearl Dive has generated is justified, but the result can be long, occasionally mishandled wait times as the staff irons out the kinks of handling the initial rush of popularity. The 78-seat restaurant was bursting with people on a recent Friday night, when one would normally expect a lengthy wait, but after some wait times stretched to nearly three hours for a table, even the most eager diner’s patience wore thin. And the 14-seat bar area, while appealing, quickly gets cramped. 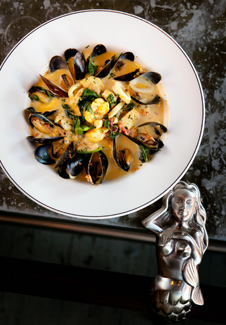 The menu includes the popular mussels from the Blacks’ other restaurant Addie’s as well as other Southern-inspired seafood.

Diners can also head upstairs to the 98-seat Black Jack, a distinctly separate lounge that serves its own bar menu, but not everyone who wants a sit-down seafood meal is going to be inclined to wait in the decadent hangout, which is bathed in red-leather banquettes and velvet drapes with club beats pulsating in the background (it’s even outfitted with a bocce ball court and spectator gallery). Plus, lines can snake out the door just to get into Black Jack, which is sure to become a popular neighborhood watering hole and really merits its own separate visit.

Downstairs, Pearl Dive is more subdued, though no less edgy or stylish. The supermarket deli-esque paper tickets that guests receive when they’re put on the wait list is a quirky touch, but again, watching for your number to be called up on the screen can be a frustrating reminder of how far down the line you really are — reminiscent of those excruciating waits at the motor vehicle administration.

Some of this, of course, is beyond the restaurant’s control, although simple mistakes added to the headaches. Groups, for example, are divided into two-tops and larger parties, but we routinely saw couples being placed in the restaurant’s limited number of booths meant for four, making the wait exceedingly long for any groups of more than three people.

That being said, is the wait worth it? Yes. The crowds are descending on Pearl Dive for good reason — the main one being the Black Restaurant Group’s flair for fresh, locally sourced, sustainable ingredients in both classic and clever preparations. The Southern-inspired menu is just that, inspired. Executive chef Jeff Black with chef de cuisine Danny Wells (who as a teenager was a line cook for Addie’s) produce smartly executed, hearty dishes that won’t disappoint aficionados of Gulf Coast, and specifically New Orleans, cuisine.

The oysters are naturally a showpiece of Pearl Dive Oyster Palace, and the selection is varied and savory. Even for the novices, staff will guide you through the myriad choices of mollusks and their accompaniments, from bacon to blue crab to spinach to no adornments at all. Highlights among the oysters on the shell include the crisp dive juice and classic cocktail kumamoto varieties, and the choices among the oyster plates are even more extensive. Angels on Horseback are a heavenly blend of grilled bacon-wrapped oysters with vin blanc and vinegar reduction, while the smooth, authentic sea-salt undertones of the grilled East Coast oysters are elevated by garlic, red chile, South Mountain Creamery butter and gremolata.

But the real star on the appetizer menu is actually a meat option: the braised pork cheeks with a chipotle-ham hock broth and stone grits. The tender meat explodes with taste, delicate and rich at the same time, and is perfectly accented by grits that wisely reappear elsewhere on the menu. With just the right texture and understated flavor that soaks in the sauces around it, Pearl Dive’s grits are sure to delight any discerning Southerner. 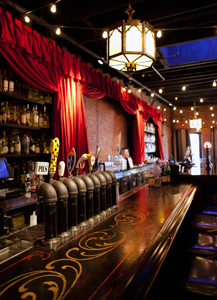 Above Pearl Dive Oyster Palace is Black Jack, a separate 98-seat bar lounge that has an edgier feel, with its own menu and even a bocce ball court and spectator gallery.

Other standouts include the barbecued shrimp with garlic bread and “messy fingers” that will have diners unabashedly licking those fingers to savor the last of those barbeque spices, as well as the Vietnamese pickled shrimp on a bed of julienne cucumbers and carrots with a punch of pickle juice aioli.

Pearl Dive has also brought over its popular mussels from Addie’s in Rockville, punctuated by garlic, shallot, fumet, butter and lemon. Though swimming in a mouth-watering broth, a few of the mussels were marred by faint rubbery notes on one recent visit.

But throughout the menu, the seafood is deftly handled. Attempts at replicating New Orleans flavor up north often fall flat, but Pearl Dive’s Louisiana crawfish etouffee, its “Que Sueno de los Gatos (What Cats Dream Of)” seafood stew, and several choices of gumbo do the Big Easy proud, while upping the ante with imaginative twists such as braised duck. The addition of oyster though in the otherwise multifaceted seafood gumbo was overkill on the bivalve theme. Still, the gumbo entrées are big in both size and in complexity, overflowing with okra, veggies, shrimp, sharp notes of sausage and file herb for an authentic Cajun kick, although the gumbo may run on the salty side for some diners.

True to its Southern roots, portion sizes at Pearl Dive are indeed filling, though that doesn’t detract from the delicate nuance in many of the creations. The wood-grilled Gulf Coast redfish, for instance, is fairly straightforward but seamlessly pairs the flaky, well-seasoned fish with sage-native pecan butter and those oh-so sumptuous grits. The Maryland blue crab cakes with corn puree, whipped potatoes and tomato salad are a light, airy showcase of potent crab flavor. Another delectable combo is the grilled local rockfish with blue shell mussels, andouille sausage, tomato and veal jus. And for a dash of the unexpected, try the duck confit and roasted duck sausage served with smoked cremini relish, French lentils and Creole mustard duck fond.

The range of entrées is also impressive and reflects the simple goodness of Southern cooking. The C.E.B.L.T. po-boy sandwich, stuffed with fried catfish, Benton’s bacon, lettuce and tomato, is both a down-home treat and an over-the-top pleasure, with a lush, gooey farm egg at its center. And there’s no shame in ordering the chicken at this fish joint — the Pennsylvania Amish chicken dinner commands respect among its seafood cousins.

Like the food menu, the cocktail menu by brothers Ari and Micah Wilder offers a robust range of flavors without an overwhelming list of choices, though it veers toward the pricey side. The small selection of cocktails has surprising depth that enhances the dishes, especially the oysters. Notably, the Abalone Bellini with Boyd & Blair Vodka and Chateau du Breuil Calvados is a smooth, refreshing concoction of cucumber, sparkling water and hints of green apple, while the signature Pearl Cup has a subtle but sharp bite thanks to the inclusion of ginger beer to go with the Pimms, Plymouth Gin, lime, mint and cucumber.

Not surprisingly, Pearl Dive Oyster Palace goes a bit overboard with the nautically themed décor, though it strikes the right balance of being visually striking without becoming cheesy. CORE architecture + design has created a warm, whimsical atmosphere with the gritty charm of a fish market and the meticulously planned look of an unrefined dive bar. Peeling white walls reveal exposed brick that frames the cozy 5,670-square-foot space, which is filled with reclaimed furniture, lots of distressed wood, undersea murals and playful touches such as mermaid figurines over the four-seat raw bar in the back and a massive lighting sculpture made of anchor chain links that floats over the main bar. The noise level is high, but that’s to be expected in this kind of lively neighborhood gathering spot.

The clientele also embodies the eclectic character of the neighborhood. We spotted an ambassador dining with friends during one visit, along with a few rowdy patrons who had to be kicked out after a small brawl. That’s Logan Circle though: a fascinating brew of personalities, from diplomats to, well, drunks.

Staff is uniformly friendly and helpful to everyone who came through Pearl Dive’s doors — even the bouncers who politely had to turn people away from Black Jack when it was at capacity. And to their credit, most of the staff recognized the occasionally long wait times and went out of their way to accommodate guests patiently sitting in the bar for their number to come up.

So will Pearl Dive drown in its own success? Not likely. The waits during the week are reasonable and the Blacks seem to have added yet another jewel to their expanding area presence, while also taking a big leap of their own by setting up in Logan Circle. Incidentally, if Pearl Dive Oyster Palace continues to ride the wave of popularity, there’s empty office space right next door just begging for the Blacks to consider a more immediate expansion of their latest endeavor.

Anna Gawel is the managing editor of The Washington Diplomat and news columnist for the Diplomatic Pouch.