Home The Washington Diplomat November 2011 With Eye on World, FotoWeek DC Zooms in on Photography’s Reach 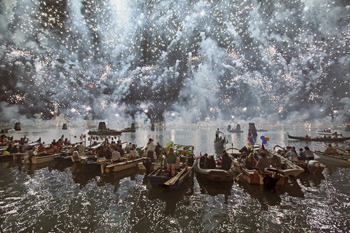 Each November, people walking down Pennsylvania Avenue freeze mid-step when they spot blown-up photographs covering the Newseum’s 74-foot-tall First Amendment tablet. Sometimes a starving child, his skin stretched tight over his ribs, peers out from the stone; sometimes the pensive face of former President Bill Clinton appears. Either way, these very big photographs illuminated against an even bigger building are startling for their outsize boldness and avant-garde placement.

Washingtonians may have also noticed arresting photos showing debris-covered Haiti draped on the side of the headquarters of the American Red Cross, magnified images of war-torn Afghanistan on the exterior of the nearby Corcoran Gallery of Art, or Native American faces peeking from the stones of Smithsonian’s American Indian Museum.

These larger-than-life images are part of an annual citywide photography festival called FotoWeek DC that has also morphed into a year-round celebration of the enduring power of photography — the brainchild of Theo Adamstein, a photographer, well-known architect and the organization’s president.

Featuring an international photography competition, dozens of free exhibits at both small and large venues across town (including many embassies), portfolio reviews for artists and lectures for enthusiasts, the festival has exploded in just a few short years to become a major showcase of both professional and amateur photographers — while offering the rest of us a snapshot of the planet strewn throughout Washington, D.C.

This year, the fourth installment of FotoWeek DC runs Nov. 5 to 12, and if last year is any indication — with some 40,000 people checking out the offerings — the burgeoning festival is sure to be a picture of success.

And that should make Adamstein, a D.C. resident who founded the seasonal festival in 2008, very happy. He originally hoped to highlight some of the most profound but under-recognized works of local photographers because, at the time, no awards program for them existed.

“There was no way to apply and be recognized for great work in this city,” Adamstein told The Diplomat in October as he scurried from meeting to meeting in preparation for this year’s FotoWeek DC.

In a city known for its magnificent architecture and monuments — a visual history of America that attracts tourists from around the world, and the perfect backdrop for great shots — Adamstein found the lack of photo competitions odd. “I thought, ‘Wouldn’t it be great to come up with a program that awards great work in the region?'”

He answered the entrepreneurship calling, and just like that a photo competition — which would eventually flower into a full-time endeavor — was born.

Adamstein began pitching his fledgling idea to city vendors and local museums for support and partnerships. Despite the 2008 recession, he found more than enough willing allies, including big-name institutions such as the Corcoran, which traditionally displays the works of contest winners during FotoWeek DC. The National Geographic also signed onto the plan as a sponsor, along with the Newseum, U.S. Holocaust Memorial Museum, as well as a host of smaller galleries.

But it wasn’t only the locals who latched onto Adamstein’s ambitious and overdue concept. The first few FotoWeek DC festivals brought in swarms of out-of-town photographers interested in submitting their work, prompting Adamstein to “go international,” as he describes it. So he expanded the Washington-centric competition to artists from all over the world. The call was answered: Last November, FotoWeek DC received 6,500 applications from 35 nations. 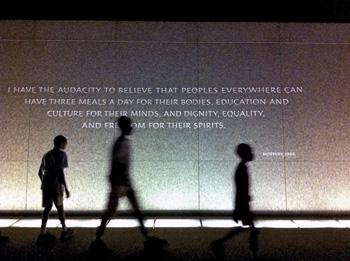 In January 2011, Adamstein did one better: He expanded the effort into a year-round project, axing the “week” of FotoWeek DC and renaming his group FotoDC. Now, the organization oversees an array of photo contests and exhibits throughout the year in addition to the signature weeklong festival. FotoDC recently settled into a new Adams Morgan home dubbed FotoSpace at 1838 Columbia Road, a move Adamstein praised as a monumental step for his nonprofit.

“FotoSpace is a new concept for FotoDC — a gallery, library, office,” Adamstein explained. “FotoSpace will also be an exciting venue for photographers to present, meet and exchange ideas.”

Among its many partners, FotoDC works with a number of embassies, which also regularly hold art exhibits and cultural events throughout the year, so a partnership seemed only natural. The Swedish Embassy hosted an exhibition and after-party during FotoWeek DC last year. At this year’s festival, the Spanish Embassy will present “Alberto Schommer: Retrospectiva 1952-2009,” an exhibit featuring the work of the iconic Spanish portrait photographer from the 1960s and 1970s. The Embassy of Finland will also feature exhibits and a lecture by Miina Savolainen, a photographer who focuses on children’s education and creator of the bestseller photography book “The Loveliest Girl in the World.”

“It’s a very good fit,” Adamstein said of working with embassies, noting that he expects the collaborations to expand. “Each country is always thrilled to present creative works of its own, in this case photography. So we act as a facilitator — sometimes I call us a matchmaker. We help them put together exhibitions or try to find spaces for them, and they bring in strong shows.”

FotoDC has also reached out to human rights organizations and nonprofits to showcase dramatic images from the thicket of global development. This year, for the first time, the organization joined Human Rights Watch and the Pulitzer Center on Crisis Reporting to offer a powerful visual documentary on the family scars inflicted by the Lord’s Resistance Army in Central Africa, the scourge of child marriage in developing nations, and other social justice issues in “Speaking to Silence: An Exhibition on Communities Displaced, Dissidents Repressed, and Childhood Betrayed.”

The result has been an eye-popping potpourri of imagery under the FotoDC banner, from the serious to the strange and everything in between. Shaved Buddhist monk heads, sleek architectural marvels, children playing in the slums, and Amish men playing checkers — they’re all peeking out at you from different parts of the city thanks to Adamstein’s vision.

This year’s FotoWeek DC will be based downtown at 1800 L St., NW, where the former Borders bookstore stood before shuttering its doors earlier this year. Adamstein dubbed the main space FotoWeek CENTRAL, but events will also occur in satellite locations at FotoSpace, the Corcoran, George Washington University and the Pepco Edison Place Art Gallery. The latter, for instance, features two exhibits — one that zooms in on children’s issues from Bangladesh to Argentina and another that presents award-winning work from the National Geographic image collection.

CENTRAL will host 14 photojournalism and fine art photography exhibits as well as this year’s 5,000 non-winning applicants in a thumbnail gallery, which will display miniature versions of all the photos entered into the competition. The dizzying collage of tiny images offer a big-picture look at how FotoWeek DC has turned the lens on photography itself, and given it a brand new venue: the nation’s capital.

from Nov. 5 to 12
throughout the city
Although most events are free, some require registration.
For a complete list, please call (202) 337-FOTO or visit www.fotoweekdc.org.