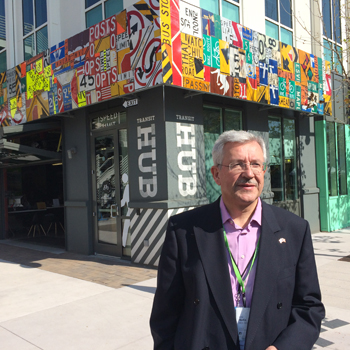 Without fail, the arrival of a new ambassador provides an embassy with an opportunity, a pivot of sorts, to evaluate what works and what doesn’t. Each new ambassador brings his or her own experience, style and message, which carry across both public and private channels, and the transition allows an embassy to change direction or up its game.

When Martin Dahinden took his post as ambassador of the Swiss Embassy last October, it offered the embassy a chance to take the next step in its nascent social media program, which was just finding its rhythm. Himself an admittedly light, and private, social media user, the new ambassador found it challenging to take the helm of the embassy’s burgeoning digital footprint.

Swiss Ambassador Martin Dahinden stands outside the headquarters of Facebook in California.

The Swiss Embassy has a Twitter and Facebook presence, built up in the past two years by a team of two: Salome Ramseier, the embassy’s head of communications, and Florence Benz, the media and communications coordinator. Dahinden brought to the post two personal accounts, one each for Twitter and Facebook, both of which he had used privately, as well as a LinkedIn account that was separate from the embassy’s. He immediately set out to establish a strategy for the four accounts with his team, and how each would be used in concert with the others.

“This was one of the major challenges. The embassy account is more of an anonymous account directed to the public interested in Switzerland in one way or the other,” Dahinden told us. “The personal account is something where I as a person do communication. It shouldn’t be private. It should be linked to my function as ambassador of Switzerland and all that it entails. But it’s not an account where a private person shares with your colleagues about family events, what you do on the weekends and so on.”

Along with selecting content and imagery, the ambassador and his team made the decision to choose one language from Switzerland’s four official national languages to post and tweet in.

“Before, when I had the Facebook account, most of the posts were in German, French, some in Italian and, every now and then, something in English,” he said. “So we had to decide to move away from this, knowing that most of the followers were people with one of our national languages, so we had to introduce mostly the English language.”

For Dahinden, quality matters over quantity, especially when it comes to his followers. “It is not so important on whether I have really a lot of people following me or not, but it is important to have the people among the followers that I’m interested in [having a future or current] dialogue.”

That dialogue can be hampered by a reluctance to communicate via social media. Both Dahinden and Ramseier admit that the staff has been at times hesitant to hop on the digital bandwagon. Ramseier points to traditional diplomacy, which has typically been conducted face to face, especially with confidential or sensitive information, as the root cause of this reticence. But, she adds, Swiss culture also tends to be more reserved than social media often encourages.

“The Swiss are very much about being modest, and social media is often looked at as, ‘Oh, you’re boastful, you’re putting yourself out there like you’re so important,’ and that is completely contrary to how we are raised to be, which is don’t speak out, be modest,” she explained.

“There is a lot of uncertainty that prevents people from using it — what should I share, what should I not share, where are the risks,” Dahinden added.

Ramseier, the driving force behind the embassy’s social media accounts, has seen the uncertainty.

“Colleagues here are very reluctant to use social media because they’re worried about saying something wrong, but I want to encourage them to use it as a listening tool, and what I learned, you can only think social if you actually do it,” Ramseier said. “You have to learn how to approach a situation from a social media perspective. It’s really different from other communications. And if you don’t do it, you don’t know how to do it. That will be one of the challenges I face: how to include the colleagues here at the embassy in the workflow so that they’re using it as a listening tool, but also contributing content.”

“Social media is something we are only at the beginning with. Irrespective now of my job, I’m thinking a lot about those developments in social media, and how does it influence my diplomacy. And it will influence my diplomacy, [just as] other technological innovations — for instance, the telephone or the telegraph or the printing in earlier phases of history — influenced diplomacy,” Dahinden said. “So for me, I think it keeps the main challenges and the main tasks of diplomacy upright but provides a new instrument.”

Molly McCluskey (@MollyEMcCluskey) is a contributing writer for The Washington Diplomat and has covered Switzerland for a variety of publications.