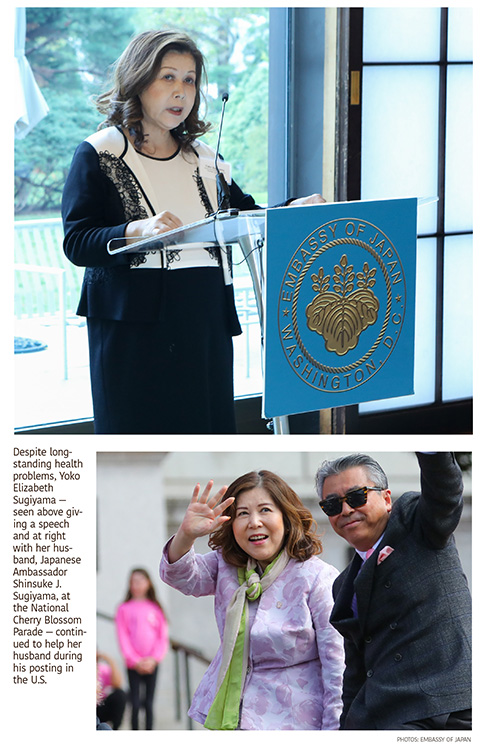 Yoko Elizabeth Sugiyama, the wife of Japanese Ambassador to the U.S. Shinsuke J. Sugiyama, died Feb. 10 of apparent sudden heart failure at the couple’s home in Tokyo at the age of 66.

The Sugiyamas have been married for over 40 years and have two grown children: a son, Shunsuke (“Shun”), who runs his own company in the Japanese prefecture of Hyogo, and a daughter, Reina, who works as a fashion designer in New York and Los Angeles.

“In just under two years as an Ambassador’s wife in Washington, Yoko had done about five years’ worth of work, and maybe at the end it was a little too much,” Ambassador Sugiyama said in a letter about his wife following her death. “She went back to Japan to rest for four to six weeks and recover from a stomach ulcer. She told me she wanted to rest a bit and then come back and help me in Washington. She was at home when the Lord called her back.”

Throughout their life together, Mrs. Sugiyama accompanied her husband on assignments to Oxford, U.K.; Abuja, Nigeria; Washington, D.C.; Seoul, South Korea; and Cairo, Egypt. During their time in Tokyo, she worked to educate students about the Holocaust, including through an Anne Frank exhibition and the Tokyo Holocaust Education Resource Center.

Born in Kanazawa, Japan, Mrs. Sugiyama graduated with a degree in Spanish studies from the Tokyo University of Foreign Studies, where she also studied linguistics at the graduate level.

In an interview with The Washington Diplomat in 2018, Mrs. Sugiyama recalled how she met her husband.

“We attended the same prep school. We had assigned seats — I was near the front of the room and he was near the back. One day, the boy who sat next to me was absent. Shinsuke took the opportunity to move up and sit next to me,” she told our reporter Gail Scott for the November 2018 article “Japanese Ambassador and Wife Enjoy Nearly 40 Years of ‘Happily Ever After.’”

“We started talking and he asked me out. Then, he started showing up at the school gate, waiting for me to come out. I guess you could say he was a pretty aggressive suitor,” joked the affable wife.

They dated on and off in prep school and college. “He kept asking me to marry him,” Mrs. Sugiyama said, telling us that she eventually broke off the relationship because he was leaving to study at Oxford and she wanted to stay in Tokyo and attend graduate school.

“But after we stopped seeing each other, I felt so lonely. I realized I was in love with him,” she said. He contacted her one last time before his departure to Britain. They met and then, as she simply said, “It was happily ever after.”

“It is a unique opportunity to be here in Washington. We get the chance to meet people from all over the world,” she told us.

“This is such an important post and an honor for us to represent Japan to the United States, our 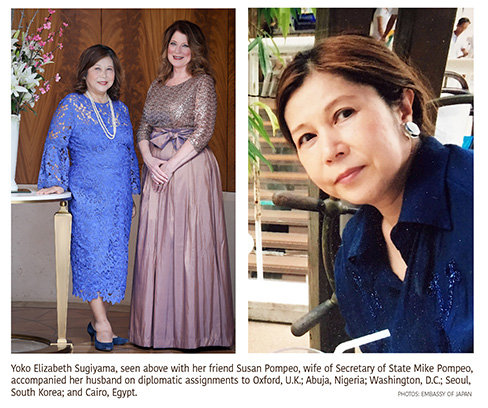 longtime and indeed single-closest ally. The United States and Japan have had such a beautiful, mutually beneficial relationship for many, many decades. I think we are living in a time when we have to constantly work together to make the world safe and prosperous, so I would be happy if I could remind people of all the wonderful things that have come out of this relationship and continue to work to build upon that friendship and strengthen it for the future,” said Mrs. Sugiyama, who along with her husband supported events such as celebrations for the National Cherry Blossom Festival and the National Multiple Sclerosis Society’s 40th annual Ambassadors Ball.

But she also revealed to us that she had been suffering from severe chronic back pain for over 20 years. “Thanks to treatments and consultations with specialists in various medical fields, I have learned how to manage — and managed to live with — the back pain because I want to do what I want to do, including supporting my husband as ambassador of Japan as much as possible.”

Ambassador Sugiyama said he is stunned by his wife’s sudden passing and still trying to process the loss.

He was in Connecticut giving lectures at Harvard and Yale when neither he nor his children were able to reach Mrs. Sugiyama by phone.

“So my son called the Yotsuya Medical Cube next to our Tokyo condominium. Dr. Kurokawa, who is the director there, was a classmate of mine in high school and is also our family doctor. He entered our Tokyo flat around 12:30 p.m. on the 12th and found Yoko lying on the floor beside the bed. She had already passed away. A police autopsy found no evidence of foul play or of disease, and we could only conclude that she had suddenly died from an unknown cause,” the ambassador explained in his letter.

“I left my hotel at 2:00 a.m., took a car to Boston, flew to Washington and arrived in Narita on the 13th. When I saw Yoko’s body, she looked almost as if she were still alive. I couldn’t find words — I just burst into tears,” Ambassador Sugiyama wrote. “The inside of our little Nibancho condo and our Washington residence still look as if she is living in them, with her clothes and kimono there just as they were in our everyday life. It was really so sudden. There’s no way to take it in.”

He added: “I’m Anglican, so I believe this is all somehow God’s will, and I have to accept it. Sometimes, God’s plans are beyond our understanding. My son and his family, my daughter and I are all trying to keep moving forward. Even so, it’s difficult.”

The family held a small funeral on Feb. 17 at their church in Roppongi, where Mrs. Sugiyama’s body was cremated. On March 6, they held an Episcopal service for her in Washington, D.C., at the ambassador’s official residence.

In his letter, the ambassador thanked everyone for their “heartwarming outpouring of support” and quoted the words of 1 Corinthians: “God does not give us trials that are too difficult for us to overcome.”