Home The Washington Diplomat April 2020 For America’s First Female Ambassador, It Was All About the Work, Not the Gender 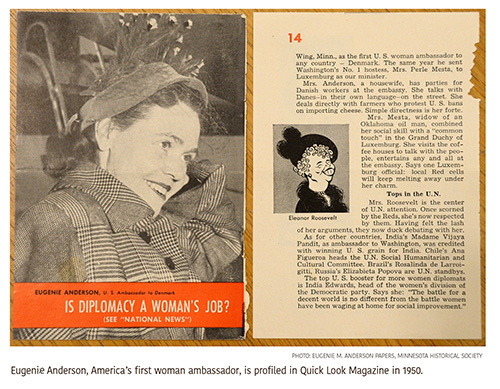 One of the first things that stands out in the book “Mrs. Ambassador: The Life and Politics of Eugenie Anderson” is that history really does repeat itself. Were America’s first woman ambassador to return to the job today, she would find herself on somewhat familiar ground: shaky relations with Russia and isolationist sentiments. What can’t be repeated is Anderson’s role as a trailblazer for women in the public sector and in the workplace more generally — although that was not her primary focus.

“She was proud, obviously, to be the first woman appointed as an ambassador, but she didn’t want to be remembered or thought of always as the first woman,” said Mary Dupont, the book’s author and Anderson’s granddaughter. “She wanted to be a good ambassador.”

Born in 1909 in Iowa, Anderson studied piano at the Juilliard School in New York for two years and eventually came to call Minnesota home. She took her first trip to Europe in 1937 and what she saw prefacing World War II piqued her interest in international affairs — and her strident opposition to the totalitarianism that she saw rising in Germany.

The experience motivated her to join the League of Women Voters, where she spoke out against isolationism and became an early supporter of the United Nations.

In 1944, she met Hubert Humphrey, who would serve as President Harry S. Truman’s vice president from 1965 to 1969. That same year, she joined the Democratic-Farmer-Labor (DFL) Party, and in 1947, she took part in the establishment of Americans for Democratic Action, which was formed by the Democratic Party’s anti-communist liberal wing. Anderson was also a delegate to the Democratic National Convention in 1948 and a campaigner for the re-election of President Truman.

In 1949, Truman appointed her ambassador to Denmark. In that capacity, Anderson helped negotiate the Greenland Pact that allowed the United States to use air bases in Greenland, and she became the first American woman to sign a treaty — the Treaty of Commerce, Friendship and Navigation with Denmark, which she drafted.

Anderson returned to the United States in 1953 and continued her political involvement. In 1962, President John F. Kennedy appointed her minister to Bulgaria — a communist ally to the Soviet Union at the time — making her the first female chief of a U.S. mission behind the Iron Curtain.

While in Bulgaria, she and her husband reportedly had to write notes to each other because the residence was bugged. Meanwhile, rocks were thrown at the U.S. legation during demonstrations organized by the government.

At one point, Bulgarian police tried to prevent her aides from handing out American leaflets at an event. “That got my dander up,” Anderson told the Associated Press at the time. “So I went out front and handed them out myself. You can bet your life the police didn’t take any from me.”

After her stint in Bulgaria, Anderson served as a member of the U.S. delegation to the United Nations and became the first woman to sit on the Security Council.

Throughout all this, she was wife to John Pierce Anderson, an artist, and mother to Johanna and Hans, each of whom had three children of their own. At the time of her death in 1997, Anderson had six grandchildren and eight great-grandchildren.

Dupont writes that her grandmother was a champion of democracy, human rights, tolerance and civil rights who “did not allow her gender to alter her message, change the course of her ambition, or narrow the global scope of her vision.”

We spoke with Dupont to get a better sense of who Anderson was.

The following interview has been edited for clarity and length.

The Washington Diplomat: Tell me about your grandmother. 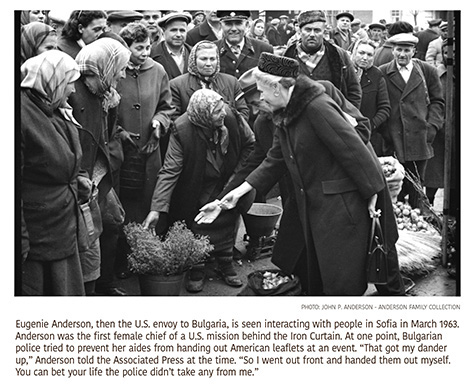 Mary Dupont: When she would go back and forth between travel and staying home, both things strengthened the other. She loved being home. I could sense that when I was younger … but her main passion was world travel and meeting people and understanding people and, truthfully, it sounds a little nerdy, but foreign policy and international relations. It was her chief interest. Beyond her diplomatic appointments and the work she did, she and her husband, my grandfather John, traveled throughout their lives.

TWD: In the author’s note, you wrote that you opted to forgo your personal stories about her and instead let others’ words tell her story. Take the time now to share some stories in your own words.

MD: She was always well dressed. Even when she was being casual, she was very well put together. Her hair was done every week. She was a really good mixture of dignified but also loved being with her family, especially her grandkids. She’d always give us paper dolls and books. I remember getting … coloring books when I was young. Most people give little girls coloring books that are about Disney princesses. We got the kind that were about American history. I’m sure I thought they were a little strange when I was young, but now I think of them as cool. She was very warm and friendly and always reading to us, but she had a side that believed in discipline for kids. If you came down for breakfast and your hair was a mess, she’d make you go back and brush it before you could sit down at the table.

TWD: You didn’t know much about her service before writing the book. Why is that?

MD: Even though I was 30 years old by the time she died, I remember it was just around the time that I was finishing high school that she started to have trouble with memory loss and health problems, so for most of the time when I would have liked to sit with her and talk about everything and learn about it, she just wasn’t healthy enough or able to do that. She and John both died in the late 1990s, and that was when I was starting to have kids, so even though I had the curiosity for a long time, I didn’t get to the writing until my kids were much older.

TWD: Now that you know more, what about her work stands out?

MD: I was so impressed by the number of different kinds of events from the 1940s through the 1960s that she was either directly involved in or it was part of the atmosphere. I read a lot of books about Minnesota history, the Democratic Party history, the presidents she worked through their administrations. I honestly had no idea of both the depth and the breadth of things that she had either affected or been affected by.

MD: In the chapter about her development with the Minnesota DFL, I talk about her collaboration with Hubert Humphrey. Based on threads of information from about five or six different sources, I realized that she was key to Humphrey’s 1948 speech at the Democratic National Convention. It’s one of his most famous speeches about coming into the sunshine and toward civil rights. [“The time has arrived in America for the Democratic Party to get out of the shadow of states’ rights and to walk forthrightly into the bright sunshine of human rights,” he said.]

She was instrumental in the closing of that speech, which tied Harry Truman to the presidential ticket and reinforced the change in the Democratic Party from being the old Southern Democrats arena to the more progressive civil rights initiative that it ended up taking. I know this is a huge what-if, but those are fun: I just like to think that if she had not insisted on the closing at that speech, things may have turned out very differently.

TWD: What example did Anderson set for her children, Johanna and Hans, your father, and how did that affect you and her other grandchildren?

MD: When Eugenie went to work, the kids were pretty young. I think my dad was about 2 or 3 years old, so when she first started spending significant time away from the house during business hours on weekdays, they had a lot of help. They had nannies. That’s still a controversy today. I could talk for another hour about the fascination with the difference between views about women going to work 80 years ago versus now and so much of it is the same.

No, it was not completely happy and it didn’t set a 100% example of women’s empowerment. 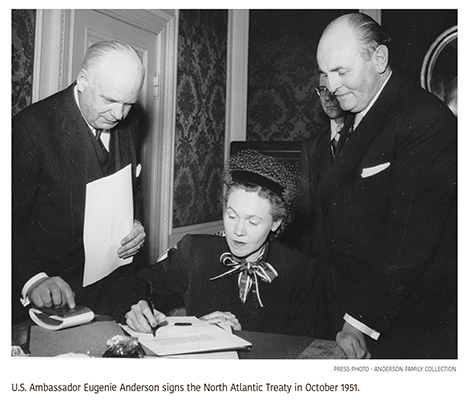 However, it certainly made a huge difference in both of the kids’ points of view that both their parents were in reverse sex roles because their mother went to work and their father was an artist. He worked all the time — he wasn’t in the house taking care of them, so he wasn’t a house husband — but he was also what you would call self-employed. I think those two things affected Hans and Johanna very strongly, and I know it affected all of us grandkids very much also.

MD: The most positive thing to come out of looking at Eugenie’s legacy is that a marriage can last and careers can be successful even if both people are doing something nonconformist. You can have a relationship, a marriage, whether it’s with a man or a woman, and a career that you feel strongly about. I think in a lot of families there’s strong pressure on one of those things — either honor the family at any cost versus what you personally want to do.

TWD: Anderson didn’t consider herself a representative of women necessarily, but she was conscious of how people perceived her. For instance, you wrote that she used more benign words such as “amused” for annoyed so as not to seem like a ranting woman. What would she think today, with women running for president, serving as governors and speaker of the House, etc.?

MD: I would think she would be extremely gratified that you can finally include the conversation about women’s rights in the bigger conversations. This is one of those cases where my brain stops and says, “Don’t speak for her,” but at the same time reading through the writing she knew would become public some day and the writing that was in her correspondence between family members, it was very clear that she understood that to keep her job or to keep making progress in her career, she had to keep women’s rights on the backburner. She couldn’t be vocal about it. She certainly couldn’t insist on it. Her tactic for remaining credible was to deny them and say, “It’s too aggressive. It won’t get you anywhere. Let’s just move on and do the work. Let’s not talk about gender.” It was about staying at the table.

TWD: What do you hope that readers take away from this book?

MD: I hope they take away a recognition that work like this was being done by women earlier than it’s more generally known. I think about 20th-century history, and there are two eras that are usually emphasized in women’s history: the suffrage era and the women’s movement of the 1970s. Eugenie’s career happened dead center of that. There was no women’s movement, there was no support for women in leadership roles, and I think besides Eleanor Roosevelt and two or three other names, it’s hard for anyone to think of a strong woman in politics at that time. The takeaway is that even during times when it seemed like no progress was being made, there were people working and history being established.