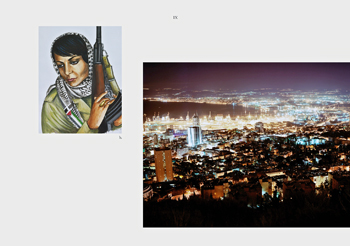 Just try to connect the dots — or, rather, bloodlines — to make a coherent whole in the rows of seemingly endless faces (not to mention some mind-boggling rabbits) photographed by provocative young artist Taryn Simon for her project “A Living Man Declared Dead and Other Chapters I–XVIII.” It’s a bit like following the breadcrumbs in a trail of identity that leads all over the world.

The project, which unfolds in 18 chapters done from 2008 to 2011, is a fascinating study of the different lots that life casts on people connected only by the thread of DNA.

Leila Khaled, the first woman to hijack an aircraft.

Simon’s exhibition at the Corcoran Gallery of Art is also a kind of catalogue of contemporary horrors, oddities, lingering outrages, echoes of crimes past and the hollow ghosts of survivors — chronicled using a concrete, systematic, scientific yet highly innovative approach.

For four years, the young American artist traveled around the world researching and recording the descendants of a single individual, or “bloodlines,” and their related stories.

These “stories” run the gamut from feuding families in Brazil, to victims of genocide in Bosnia, to people in India recorded as dead but still very much alive. Some of the resulting portraits are empty, representing those who actually did die, with the accompanying narrative of their absence — dengue fever, imprisonment, women not allowed to be photographed, etc. All of the portraits, in fact, presented in a series of grids, tell a story, with rich details methodically organized to reveal social changes driven by science, culture and chance.

“In each of the 18 chapters,” the artist has explained, “you see the external forces of territory, governance, power and religion, colliding with the internal forces of psychological and physical inheritance.”

“A Living Man Declared Dead” is a meticulous examination not unlike Simon’s previous exhibitions.

She culled the ground before for “Contraband,” which featured photographs of thousands of items confiscated at U.S. airports. In “An American Index of the Hidden and Unfamiliar,” she captured the spaces, sites and objects that are squarely in American mythology but have never been seen by ordinary Americans: a CIA art collection, bears in hibernation during a scientific study, radioactive nuclear waste and so on.

“A Living Man Declared Dead” is similar in the sense that it incorporates bits and pieces, using methodology to produce a startling effect: the rows of portraits that almost look like wanted posters, the accumulation of data, and the stark representation juxtaposed with loaded text in a way that seems furtively dangerous.

An anecdote lays out the beginning of each story, which branches out a bizarre family tree of sorts. 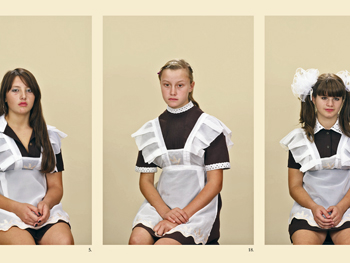 Taryn Simon’s “A Living Man Declared Dead” is broken up into “chapters” that track down the descendants of a single individual, revealing striking stories, such as a group of Ukrainian students dressed as maids.

Among the starting points for the “chapter summaries”: India, where it’s common practice, apparently, to pronounce people dead in order to acquire their land; the beginnings of Jewish settlement in Palestine at the start of the 20th century, pioneered by Arthur Ruppin; and Bosnia, where six of 21 members of one bloodline were murdered during the Srebrenica massacre.

Simon also photographed all nine wives, 32 children and 63 grandchildren of an herbal healer in Kenya who treats HIV/AIDS, infertility and evil spirits; a man who claims to be the body double of Saddam Hussein’s son; various people abducted by the North Korean regime; the offspring of mothers who had ingested Thalidomide during pregnancy; young girls selected to be the bodily incarnation of the goddess Taleju in Nepal; Albinos in Tanzania who are often hunted down and killed; and children at a Ukrainian orphanage, many of whom end up in the sex slave trade.

Oh, she also snapped pictures of more than 100 rabbits that had been injected with a lethal disease generated by the Australian government to control rabbit populations.

I don’t exactly know how many portraits there are — they never quite blur into a mass, but neither is there time to really consider them individually. It feels like going down the rabbit hole — in the Australian case, literally so — of coincidence, tragedy and strange circumstance. Each chapter could make for a novel in itself, or at least an epic poem or Quentin Tarantino movie.

The dry language of the reportage, the names of the descendants and the statistics do not totally dampen the sense of the creepy and weird. Because going through the rows of faces, you do feel a connection among all of them, even the blank spaces. Those faces are telling you their stories — not screaming them, but whispering them. You cannot help but contemplate what if you were descended from the first woman — Leila Khaled, a member of the Popular Front for the Liberation of Palestine — to hijack an aircraft, or from the man who served as Hitler’s personal legal advisor and governor-general of occupied Poland.

If you Google Taryn Simon and images for her, you get a page that feels like what could be the beginning of an autobiographical project for her — an image of Simon, an attractive woman in her 30s, mixed in with photos from her shows. All that’s absent is the kind of data that would explain it.

In reflecting on the descendants of the Druze in Lebanon who believe devoutly in reincarnation, Simon’s comment also very much applies to herself as an artist and to her work: “It’s as if we become ghosts of our past and of our future.”