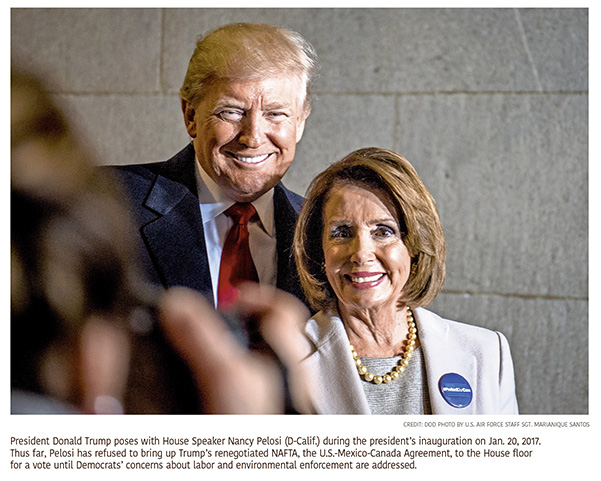 The Trump administration has given in to House Democrats’ demands — some of them at least — in the hope of making the United States-Mexico-Canada Agreement, or USMCA, palatable to them.

Whether the changes the administration proposed will be enough to satisfy Democrats remains to be seen. They have been reviewing the proposal, which has not been made public, and ramped up negotiations with the White House. But House Speaker Nancy Pelosi (D-Calif.) has not committed to putting the trade deal up for a floor vote despite a push by the administration for its swift ratification. For the USMCA to take effect, the House and the Senate have to approve it via floor votes. So does the Canadian Parliament. The Mexican Congress has already approved it.

Democrats have said that the USMCA, which is a revision of NAFTA, fell short of their expectations in a number of ways. Their principal complaint is that it is weak on enforcement of labor and environmental rules. They also object to the Trump administration’s acquiescing to the pharmaceutical industry’s insistence on having 10 years of exclusivity on the production and sale of biologic drugs, a condition that Democrats fear could lead to higher drug prices.

NAFTA doesn’t address labor rights or environmental protection. They are addressed in side agreements that are mostly unenforceable. U.S., Mexican and Canadian negotiators moved the side agreements into the body of the USMCA and strengthened their enforceability.

Rep. Richard Neal (D-Mass.), chairman of the House Ways and Means Committee, said on Sept. 11 that the administration’s proposal represented substantial progress, but more needed to be done, particularly on labor rights enforcement.

Originally, the United States demanded the right to send inspectors into Mexican factories to see if they were adhering to the USMCA’s labor standards. The government of Mexico objected to that, in part because it wasn’t reciprocal. Mexico proposed allowing Mexican labor officials to accompany U.S. inspectors and the Trump administration “has indicated it’s open to adopting a system of binational inspections,” Politico reported on Sept. 16.

“Critics of NAFTA argue that lower Mexican labor standards combined with liberalized trade led U.S. companies to move operations to Mexico and hire lower-cost labor at the expense of U.S. jobs,” according to a Sept. 5 “Critical Questions” brief by the Center for Strategic and International Studies (CSIS) titled “Road to USMCA Ratification: Is the End in Sight?”

Democrats worry that the USMCA’s strengthened labor enforcement is still “not strong enough to ensure workers in Mexico are afforded rights similar to those afforded to U.S. workers,” the brief says. “The Mexican Congress enacted labor reforms in April to allay some concerns and bring Mexican law into conformance with its USMCA obligations; however, Democrats are closely watching how quickly and aggressively the new law is implemented.”

Another enforcement issue comprises disputes between USMCA parties. Under NAFTA, a country can indefinitely block a legal challenge by one of the other countries by refusing to allow the formation of an arbitration panel. Because of this, the treaty’s dispute resolution essentially broke down. U.S. Trade Representative Robert Lighthizer supports that right of refusal, but the administration is nonetheless willing to consider eliminating it, Politico reported.

Democrats also say that the USMCA favors Big Pharma over patients. One hundred House Democrats sent a letter to Lighthizer in July expressing “strong opposition” to the 10-year exclusivity period for U.S. biologics in the USMCA, which they said “would keep drug prices out of reach for patients.”

Biologics are made from living organisms, rather than chemicals. They are used to treat conditions such as cancer and are a significant driver of higher prescription drug costs.

Democrats argue that the USMCA shields big pharmaceutical companies from generic competition in the form of so-called biosimilars, which could not be exported to Mexico or Canada for at least 10 years even though Mexico has no exclusivity period for biologics and Canada has one that lasts eight years.

“Even if Congress were to suggest a lower threshold in USMCA than ten years, it would not change America’s existing twelve-year standard,” wrote Miriam Sapiro, deputy U.S. trade representative in the Obama administration, in a memo to the Pass USMCA Coalition.

Democrats also complain that the USMCA doesn’t address climate change. Trump is particularly resistant to any effort by the U.S. government to combat climate change. He has said it doesn’t exist.

The agreement says that each country “affirms its commitment” to international environmental agreements it has joined. For the United States, that would not include the Paris climate change agreement because Trump withdrew the U.S. from it in 2017. The administration has agreed to work with Congress to strengthen the USMCA’s environmental provisions, but has not said it would add language addressing climate change. The word “climate” does not appear in the 1,812-page USMCA text.

Congressional Republicans, and some Democrats, are satisfied with the USMCA as it is and want House Speaker Pelosi to allow for a vote right away.

“We should be passing that right now,” House Minority Leader Kevin McCarthy (R-Calif.) said in a Sept. 9 interview with CNBC. “It would guarantee, at a minimum, 180,000 more jobs. GDP will go up.”

That claim was based on the U.S. International Trade Commission’s estimate that the USMCA could create about 180,000 jobs after six years and that GDP would increase by 0.35%, but only if the agreement were fully implemented and enforced.

Both McCarthy and Vice President Mike Pence say that if Pelosi brings the current USMCA to the floor, it has the votes to pass. “It so much comes down to Speaker Nancy Pelosi, who I believe has been dealing with our administration in good faith on this issue,” Pence recently told Maria Bartiromo of Fox News. “We’re going to continue to engage Speaker Pelosi, but again, I truly do believe if Speaker Pelosi puts the USMCA on the floor it will pass, then it will pass the Senate and the American people are going to have a tremendous win for our economy.”

If Congress doesn’t ratify the USMCA, however, Trump has threatened to withdraw from NAFTA. NAFTA allows parties to withdraw after giving six months’ notice of intent to do so. However, most trade experts think he can’t do that unilaterally because NAFTA was codified into federal law by way of implementing legislation. They say the law would have to be repealed for the U.S. to withdraw from NAFTA.

Meanwhile, the clock is ticking on the USMCA (also see “Amid Tariffs and Elections, Ratification of New NAFTA Is Ever-Moving Target” in our July 2019 issue).

Canada has said it will only ratify the deal in tandem with the U.S. But Ottawa is having elections on Oct. 21 and if a new governing coalition comes to power, the USMCA will have to be reintroduced in the new parliament.

The U.S. also faces electoral constraints. “Democrats suggest mid-fall is a more likely timeline for legislative action,” according to the CSIS brief. “But the longer negotiations between the administration and Democrats drag on, the more likely the USMCA will be caught up in the 2020 election. The prevailing view is that if it is not voted on by the end of 2019, it will not likely be taken up until after the 2020 election, almost a year later.”