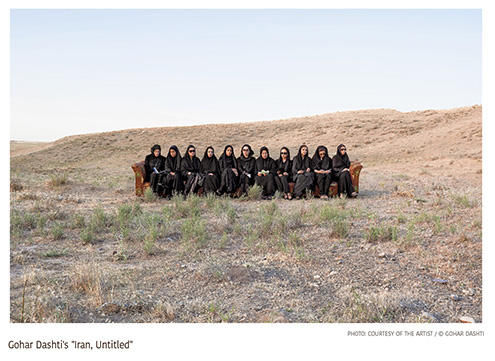 This is an Iran that doesn’t make the front pages.

With the air conditioning blowing at full speed in the gallery, the resplendent turquoise headscarf on a woman named Somayeh billows in the wind in a single-channel looped projection by the photographer Newsha Tavakolian. The camera slowly zooms in. Somayeh stares forward, confronting viewers with her steady gaze, ultimately fading into darkness before we loop again to her standing tall against a tree whose empty, expansive branches are scattered with a few clear plastic bags.

This immersive piece is a transfixing start to “My Iran: Six Women Photographers,” now at the Arthur M. Sackler Gallery through February. The show explores Iran at home and abroad through the eyes of a selection of women photographers from the start of the Iranian Revolution to the present day. It’s a welcome, nuanced approach to the country, with women both at the heart of these narratives and serving as the narrators and creators behind them.

“We’ve never shown these six Iranian artists together, and with the new acquisitions, they’ve never been shown at all, so we just thought this was a really good time to bring them all together and present a different view of Iran — and of artists in Iran and how they’re working — than what people are seeing in the media every day,” co-curator Amelia Meyer told The Washington Diplomat.

Tavakolian, whose stunning work effectively melds the personal and the political, is one of the many highlights of this exhibition. “These images will not change anything, nor will they help anybody. What I hope is that they visualize a generation marginalized by those speaking in their name,” she says in a quote in the exhibition text.

Tavakolian found herself in the news earlier this year when The New York Times announced she and her Dutch husband Thomas Erdbrink, the paper’s Tehran correspondent, had been denied permission to work in the country. 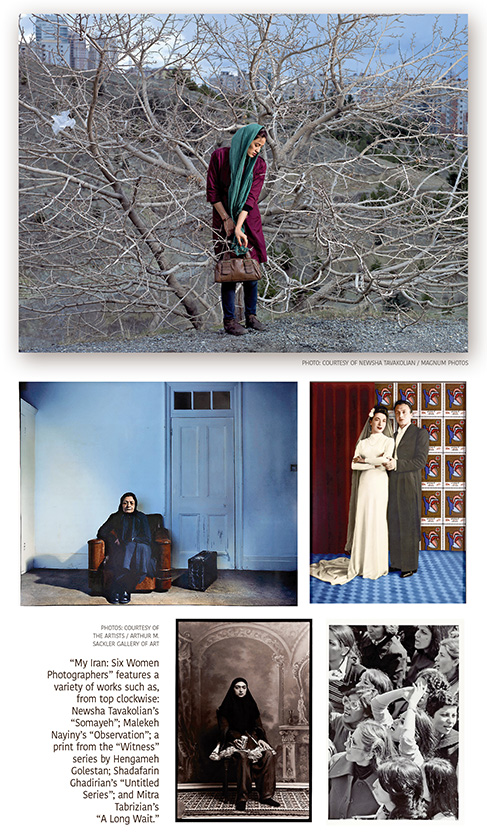 “My Iran” is a photography show that embraces the fullness of the medium: There are projections, prints that resemble photo albums, black-and-white pictures, documentary photography, whimsical pastiches and manipulated images and computer-generated photographs. There’s also an incredible, small collection of photographs from a 19th-century album showcasing the Iranian Qajar Dynasty-era photography that inspired some of the artists in the show.

American perceptions about Iran have been largely shaped by the 1979 Revolution, whose aftermath Golestan famously captured in photographs documenting the protests that erupted after Iranian authorities ordered women to wear the veil (chador) in public.

While the other photographers examine life in post-revolutionary Iran, “the show isn’t overtly political,” Meyer said, noting that even though the photos mostly focus on women, men are also depicted. The result is a nuanced portrayal of the country that offers different “representations of how Iranians are living,” Meyer said. “There’s no one definition of what it means to be Iranian.”

The show depicts an array of compelling scenes. Ghadirian’s intriguing series, inspired by 19th-century Iranian photography, incorporates the contemporary and the historical, with women dressed up in traditional attire posing with objects like a Pepsi can, a newspaper or a bike. The stark contrast hints at the traditional and modern forces that both coexist and compete in today’s Iran.

Dashti, who lives and works in Iran, has a particularly memorable set of stylized images from her series “Iran, Untitled.” In one, women are pictured seated on a long couch. They’re reading, gazing into the distance, sporting sunglasses — all seemingly unconcerned with the emptiness of the landscape. They could be right at home, or set adrift. The opposing image features men and women out in that same, liminal wilderness, waiting with suitcases. What are they waiting for? Are they staying? Or going?

Tabrizian, who lives in London, shares the final room with Dashti, and it’s a fascinating pairing for their monumental works. As Tabrizian says in the exhibition text, “Those who live in Iran tend to idealize life in the West and those who live outside long for ‘home.’ But what both groups have in common is the will to survive.”

“I think the last room of the gallery is particularly arresting. There are two Tabrizian photographs of the emigres who are living in London, and they are kind of interspersed with the Dashti photos of people living in Iran. So you have these very different communities living inside and outside of the country, but you see this kind of limbo that they’re all sort of standing in, this middle space as Tabrizian has called it,” Meyer said.

The exhibition closes on Dashti’s beautiful series “Home,” which showcases plants growing out of abandoned buildings. The perspective makes the plants seem endless, spreading and expanding, reconfiguring the architecture and transforming it into something new. These plants may not belong in that space, the images suggest, but they are there and thriving in unusual, strange conditions. They’re a part of the landscape now.