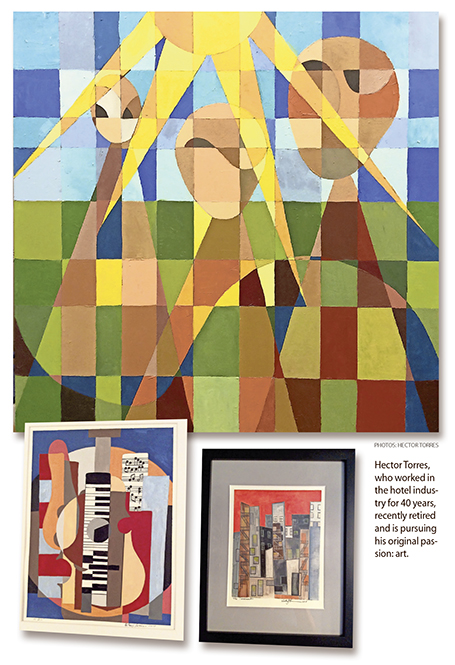 After about 20 years with Capital & and Suites, five of them as general manager of the Beacon Hotel, Torres retired as of June 1, three months after Boston-based Rockpoint Group bought the hotel. Now, he’s focusing on his first love: art.

“I happen to love the hotel industry and I happen to love what I ended up doing, but it wasn’t my very first choice,” Torres said. “You live in two worlds. One is a business world that you have to perform and another that is a very private world where you want so badly to be an artist.”

The New York native never gave up on his artwork — mostly painting and a few sculptures – but now he’s devoted to it full time. And he’s got his first exhibit titled “Transitions: Coloring My World” on display at the The Galleries at Children’s National Health System through Oct. 26. It features 69 of his works.

“While some of the pieces may be signed 2018, the fact is some of these pieces I had been working on since 2015. I had never resolved them” until the retirement, Torres said.

He became interested in art as a child living in New York’s West Village. After watching a woman put cans on the road that she would then collect after cars had crushed them, he asked her why. She took him to her studio and showed him the art she was making out of them. Then she gave him watercolors and paper and told him to make something, too.

Torres went on to make and sell kites at school. His classmates also paid him to do their drawings in science class and teachers hired him to create friezes over their chalkboards. He earned a degree in secondary art education at St. John’s University in New York, but the city froze licensing for such teachers and funding for art programs overall soon after he graduated. He had been working part time at a hotel, so he stuck with that.

“Because of my being bicultural and bilingual, I was offered to teach English as a second language, and I said, ‘That’s not what I prepared for,’ so I really didn’t want to do that,” said Torres, who had also lived in Puerto Rico. “I continued working in the hotel business, and I guess the rest is history.”

He’s worked for several hotel companies since then and can draw parallels between his accidental and first-choice careers.

“There’s also an art form to hospitality and you try to make your mark anywhere you can,” Torres said. “And sometimes that’s making people feel good and working with your team. The teacher in me still prevailed in working with my staff.”

What’s more, he got to travel, especially during his eight years with the Grand Heritage Hotel Group, and study art on his own time at museums and galleries in places like London, Milan and Paris. “I would do my work and then run to a museum,” he said.

He also brought art materials to make linocuts and watercolors with him on the road, always keeping one foot in the art world. In fact, he found creative freedom in having a separate career because he wasn’t worried about whether a piece was going to sell. “You can jump from one style to another to another just in the same night if you wish,” Torres said. “You’re not interested in anything than the actual process of creating art.”

Although much of his work is colorful abstracts, he has done some figurations, most recently with the theme of migration. He largely keeps politics out of his art, but recent world events have found their way onto his canvas, Torres said.

“In recent months, I have taken a darker perspective of what’s happening so I’m currently working on a piece that is all based on gray tones,” he said. It will lack the quirky, funny-looking expressions of most of his work, and “I may not even show it ever,” he added. Sometimes, art is his version of a therapist.

The art at the Children’s National exhibit — part of the medical system’s creative and therapeutic arts services — will be on sale, and part of the proceeds will go toward education programs for children at the hospital.

Torres’s pieces sell for about $195 to $1,400, but he says he’s more interested in sending his art to places where it will make people happy than in turning a profit. It’s a lesson he learned years ago at an art show, where he fell in love with a $3,000 piece he couldn’t afford. The artist saw what it meant to him and sold it for what he could spend: $700. That piece still hangs in his home in Southwest D.C. today.

For 10 years, he and his partner, Jay Haddock, hosted annual fundraisers at which they’d sell Torres’s art and donate the proceeds – totaling $1 million – to Whitman-Walker Health’s Latino programs. What’s more, when friends admire his work, he often wraps it up and gives it to them at the holidays.