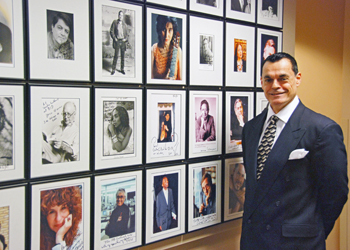 Félix Ángel is a widely recognized, prolific artist who has shown his work all over the world and who — in his younger days in Colombia — lived the artistic life as any artist should: He painted, studied, wrote an underground novel and was part of a budding, lively art scene in his native Medellín.

At the time, he probably hoped to achieve professional success, have his work exhibited, appreciated and understood, and his writing read and respected. Ángel might have envisioned himself in his 50s as an established artist, moving ahead, always changing, stretching boundaries and shifting gears.

But he may not have exactly imagined himself as the director of a cultural center run by a big multilateral bank, nurturing an ever-growing, innovative art program in a global epicenter of politics.

Well, Ángel the artist and Ángel the director have both been busy, as has his imagination. And now he’s getting ready to retire. Not from being an artist — that would be impossible to imagine. But he is preparing to retire after nearly 20 years as curator and 11 years as director of the Inter-American Development Bank (IDB) Cultural Center in D.C., a twist and turn in his career that was probably not in the plans of his fertile imagination.

Over lunch at the IDB, he still sounded a little perplexed and surprised about having essentially worked at a bank for the last two decades.

Félix Ángel stands in front of a wall at the Inter-American Development Bank Cultural Center that depicts the many artists, singers, authors and others who’ve participated in the center’s extensive series of exhibitions and events over the years.

Where we are is like nowhere else in the city. The IDB, established in 1959, is the largest source of development financing for Latin America and the Caribbean. However, unlike the World Bank and IMF, whose development financing is also far-reaching and influential, the IDB is unique in that it boasts a thriving, legitimate cultural arm that, under Ángel’s direction, has become an unrivaled showcase for art related to the bank’s 48 member countries, ranging from Argentina to Venezuela, and many unexpected places in between.

“Félix Ángel, as director of the IDB Cultural Center, has helped create a unique institution with his creativity, insight and imagination. With the exhibitions he has presented over the years, and through the various activities of the center, he has presented all the diversity of Latin American culture and art to Washington and the world,” said Luis Alberto Moreno, IDB president since 2005 and a fellow Colombian native who served as Bogotá’s former ambassador in Washington. “He has built a major reputation for the IDB in the cultural arena.”

Ángel has built that reputation with a steady stream of concerts, lectures and films, and by mounting consistently original, consistently eclectic exhibitions whose sheer titles speak to the depth of ideas cultivated at the center over the last two decades: “What a Time It Was: Life and Culture in Buenos Aires, 1880-1920”; “Parallel Realities: Five Pioneering Artists from Barbados”; “Vive Haiti! Contemporary Art of the Haitian Diaspora”; “Of Earth and Fire: Pre-Columbian and Contemporary Pottery from Nicaragua”; and “Two Visions of El Salvador: Modern Art and Folk Art.”

More recently, there have been extensive shows featuring contemporary Jamaican artists, expatriate Latin artists in Canada, and the current exhibit on Latin American artists of Italian descent, in part commemorating the 150th anniversary of Italy’s unification.

“The exhibitions are the most visible part of what the center does,” Ángel said. “This is true also of the lectures, the readings, the films and concerts. We present the face of not just the IDB itself but of Latin American culture to the world, and to this city, with its political community and its international presence. But we are an intricate and important part of what we call the mother ship, the economic support activities, the cultural support and projects we engage in with our various member nations.”

In addition to collaborating with the Latin and Caribbean embassies in Washington, Ángel has been working with the Organization of American States’ Art Museum of the Americas — whose own art program has also been expanding — most recently teaming up for the “About Change” series of exhibitions.

Change in fact is a constant theme in Ángel’s artistic endeavors, which have chronicled how the tides of history — from ancient civilizations, to colonization and dislocation — along with modern-day forces such as urbanization, immigration and globalization have all shaped the region and propelled the enduring search and struggle for identity. It’s been both an individual and universal quest as artists from vastly different nations try to forge a common yet specific identity. And the IDB Cultural Center has taken us on this journey, spanning the most remote islands of the Caribbean, places of both pristine beauty and grinding poverty, to the bustling streets of Mexico City, to dusty villages in Guatemala and the jungles of Peru.

Ángel has devoted the time and travel necessary to pull these kinds of exhibitions together, meeting face to face with hundreds of artists, curators, museum heads, potters, students, videographers and anyone else with a hand in art. Along the way, he and his team have had a hand in discovering worthy groups, individuals and projects supported by the IDB.

Over the years, this writer has been along for the ride, documenting many of the Cultural Center’s exhibitions in the pages of The Diplomat. It has definitely been an education — on artists and movements, cities and places, as well as an entire continent and history — and you realize over time that Ángel has compiled a powerful story, with every exhibition like a chapter in a book still being written. What you end up with is not necessarily a story of great epochs, but the stories of everyday people, whether from Belize, the Bahamas or Brazil, who are keenly aware of their past, of once-grandiose ruins and European shadows, as they create art that is reflective of this geography and history, while at the same time reacting to the present and thinking toward the future.

“It is very much like a story,” Ángel said. “And it connects with what the mother ship does, with creating partnerships. We find the stories of younger artists, we capture what young people are doing with video art, and we have worked with all the regions and embassies here. It is a kind of tapestry, yes. We have no museum of Latin American art here, yet. It’s something I would like to see.”

In a way, it’s something the city already sees at the IDB Cultural Center, an unofficial museum of Latin American art — and a personal and professional fulfillment for Ángel.

Particularly gratifying was a 2009 exhibition and series of events celebrating the 50th anniversary of the IDB, including a display on the culture and history of Medellín, Ángel’s hometown, where the IDB board of directors held its annual meeting (also see “Medellín Moves Up: IDB Celebrates 50th Anniversary in Colombia’s City of Change” in the April 2009 issue of The Washington Diplomat). In honor of the landmark event, Ángel organized “50 Years, 50 Works: The Art of Latin America and the Caribbean in the 20th Century,” which also traveled to the city where he graduated as architect from the University of Colombia and where he first garnered critical acclaim as an artist and writer, having penned an underground novel called “Te Quiero Mucho Poquito Nada (I Love You, and I Love You Not)” in 1975.

He can still vividly recall a visit in the 1990s when he experienced firsthand the raging drug wars that almost tore the city apart. “A car bomb exploded on the street where I was staying,” Ángel said. “I could have been easily killed. It was a devastating, powerful blast.”

The Medellín of the 1990s is nothing like today’s transformed city, where camera-toting tourists are more visible than machine gun-carrying soldiers. Ángel and IDB President Moreno share a Colombian heritage, and hope, that permeates both men.

“Colombia is a country of big ideas, of optimism, of great creativity and imagination. There is, even in times of troubles, an enormous vitality and energy and pride in our cultural heritage. Colombian people are forward looking. Felix embodies all of those qualities,” Moreno told us.

“He is the pioneer,” Moreno added. “He will be difficult to replace.”

For his part, Ángel credits the support he’s received at the center. “I could not perform my role without the help of my team, which is something like a family here. I will miss working with the talented, creative people that have been with me,” he said, citing Soledad Guerra, his assistant general coordinator and all-around right-hand person; Anne Vena, the concert, lecture and film series coordinator; Elba Agusti, cultural development program coordinator; and Debra Corrie, IDB art collection management and conservation assistant.

Ángel has helped to put together his last exhibition here, on Latin American artists of Italian descent, and appears ready to move on after bringing dozens of such exhibitions to life. “I can say we have accomplished a lot here, and we have taken the center to a certain place,” Ángel said. “I have to move on. I think it’s in a place where it moves onto the next phase. I have never stopped being an artist, and I can take stock and focus.”

That focus has not only helped him to create acclaimed art, but to lead a center that made the IDB a player in the city’s cultural diplomacy, long before people were using that phrase as second-nature.

Retiring doesn’t seem all that surprising to him, but the fact that he has been building up the IDB Cultural Center for almost 20 years still seems to surprise him.

“Well, I am still an artist, and always have been,” Ángel said. “It is who I am. And I want to continue to explore my art to the fullest. But I think what we — and it is a cooperative enterprise — have done here, well, I am very proud of that.”