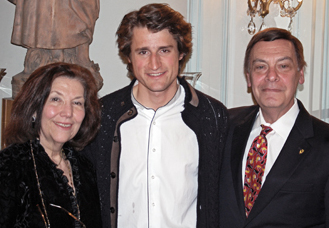 Click Here To See: Season Highlights – The Embassy Series kicks off its 18th season on Sept. 15.

Click Here For: “Mutual Inspirations,” – A citywide musical festival spearheaded by the Czech Embassy in Washington in honor of Antonín Dvorák’s 170th birthday.

A disquieting uncertainty may have blanketed Cairo and much of the outside world following Egyptian President Hosni Mubarak’s surprising resignation on Feb. 11 after nearly 30 years in power. But at least for a few hours on March 4, Egyptians diplomats put worries about the future aside and sat quietly in the ambassador’s Washington residence to take a respite from revolution.

They were listening to music.

In the mission’s first public event since the Arab spring began, Caroline Chéhadé, a young Egyptian-Canadian violinist, played Beethoven’s “Spring Sonata” for the crowd — a song that centered on “hope and peace,” she said.

“Forget about the political system,” said the world-renowned vocalist who started the concert series in 1994. “We’re not even talking about that. This is about real people, bringing them together.”

Photos: Morris Simon / The Simon Firm for The Embassy Series

“Everybody loves music, so you find a commonality by doing something that everybody likes,” added his wife and co-founder Lisette. “No matter what your background or culture is, you learn to respect each other’s different arts — it’s a way of communicating at a different level.”

Kicking off its 18th season this month, the Embassy Series invites diplomats and Washingtonians to embassies or ambassador residences to enjoy intimate musical performances featuring guest artists who are either natives of the host countries or well-versed in their musical styles and traditions. Most of the artists have performed at world-class venues and garnered accolades and awards, or represent the up-and-coming talent of their nation, and the concerts are capped with receptions of native cuisine, wine and socializing.

“We wanted to have such a high-quality event that people say, ‘Wow, what a memory,'” Barry told us.

It’s a formula that’s worked well for the Embassy Series, which has hundreds of concerts under its belt. Performances regularly sell out and have steadily expanded over the years. In addition to the series’ longtime European embassy partners such as Austria, Germany, the Czech Republic and Lithuania, nations such as Turkey, Afghanistan, China, Ukraine, Iraq and even Cuba have come on board over the years (also see “Axis of Engagement: Embassy Series Sings Praises of Cooperation Over Confrontation” in the October 2009 issue of The Washington Diplomat).

The growth ties in with the Barrys’ original hopes for an organization that unites people of different cultures or political views though a mutual appreciation for classical music.

It was an unconventional idea back in the early 1990s, but who better to execute the abstract, ambitious concept than Jerome Barry, a passionate vocalist with linguist skills that would make any State Department employee jealous, with fluency in nine languages (and the ability to sing in 27).

Married in 1966, the Barrys engulfed themselves in the music scenes of Italy, Germany and Israel, living abroad for almost a decade. Jerome performed in more than a dozen countries, while Lisette became his number-one fan.

After returning to the United States more than 30 years ago, they settled in Silver Spring, Md. Jerome began performing at various embassies and eventually co-created an eight-person chamber ensemble in 1981.

But he and Lisette weren’t satisfied. Washington, D.C., they thought, was too political — everyone was stiff from the Cold War. Where was international art and culture in a city with more 175 embassies?

“Sometimes you have to rear up on your hind legs and say, ‘Stop! This is no good.’ We artists have to stick up for what we think is important,” said Jerome, a Boston native at heart and in accent.

And what was important to Jerome and Lisette was music. The duo started a nonprofit that would give rising musicians from various cultures the opportunity to perform at their countries’ embassies, while also embracing a new form of “soft diplomacy” — long before the term came into vogue.

“People may ask what a concert has to do with anything, but sharing musical traditions establishes interpersonal relationships that bind people together over noncontroversial things,” Jerome said.

Politics, he added, are out of the picture: “My idea is not to confront people, even though I don’t necessarily agree with the political views of everyone I work with. The goal is to build connections with people instead of questioning their values or complaining about what their governments are doing. What we have to do is to create goodwill among the people: Let them know you care; share their music; share their culture.”

Beyond the high-minded aspirations of their project, there was also a practical aim: helping young talent earn a decent living. According to Jerome, only one in seven conservatory music graduates find a job, even though many “work like dogs.” American culture today, Lisette added, is too star-struck by sports, and there are few opportunities for young artists to find work that pays.

The Business of Art

With those goals in mind, Barry and Lisette launched the Embassy Series in 1994, eventually dubbing their quaint Silver Spring home as headquarters. As director, Jerome became the artistic brain of the operation. For those first few years, Jerome scheduled appointments with ambassadors and cultural attachés to pitch his concept of hosting small recitals at embassies and residences, at a time when opening a foreign mission’s doors to the public seemed, well, foreign. 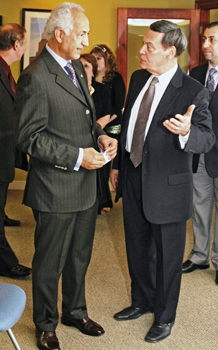 Jerome Barry talks with Ambassador of Iraq Samir Sumaida’ie. Next May, the Iraqi Cultural Center will host an Embassy Series concert featuring the Two Rivers ensemble that combines jazz with maqam.

Meanwhile, Lisette took on sales and fundraising and became the nonprofit’s primary contact with customers. And after all these years, she still reads each of Jerome’s emails and edits his business memos.

In 1994, the couple scheduled a mere six performances for a trial run of the Embassy Series. Four European embassies at which Jerome had previously performed agreed to host the concerts.

Since then, Barry and Lisette have watched their fledgling startup flourish. Today, more 1,000 Embassy Series musicians have performed at more than 60 embassies. The series grew to its biggest season in 2006 with 42 concerts — which was “just too much,” Jerome said — and now averages about 25 performances a year.

And those 25 slots are competitive, Jerome said. Now, embassies pitch performance ideas and concert dates to the Barrys so often that they don’t always have enough space and have to postpone proposed concerts for future seasons.

There’s also no shortage of musicians interested in performing. Lisette receives about 200 inquiries each month and says there’s usually too many applications to sift through.

And the nonprofit’s success hasn’t gone unnoticed by the media. CNN producers, for example, showed up for the Egyptian concert in March. At a concert at the Iraqi Cultural Center last October, Al Jazeera and two Iraqi TV stations brought their cameras along.

And most important, the audience keeps coming back for more. One frequent Embassy Series visitor said his family has cut back on all entertainment spending in the wake of the economic downturn — except for the Embassy Series.

Jerome, noting that about 95 percent of the concerts sell out, credits this popularity with keeping them afloat throughout the years. After all, most new arts groups tank within two seasons, Jerome said, due to a lack of funding.

“People always ask me, ‘How are you doing this?’ And I say, ‘Well, I haven’t missed a meal.’ Let me put it this way: We artists — and we’ve been like this since we were married — do this because we love it. We enjoy being in society in a meaningful way.”

Eventually, the couple hopes someone will take over the organization, or at least “adopt the model” of musical diplomacy. But until then, the Barrys will keep directing the music, “for at least another five or 10 more years,” Jerome said.

For more information on the Embassy Series, please call (202) 625-2361 or visit www.embassyseries.org.