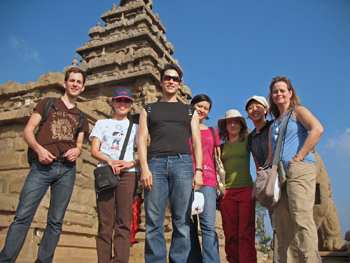 Dana Tai Soon Burgess, founder and director of the modern Asian-inspired dance group Dana Tai Soon Burgess & Co., and Septime Webre, artistic director of the Washington Ballet, have each actively taken their troupes abroad, touring internationally while incorporating their global experiences into their productions back home. And although the choreographers differ drastically in their styles of dance, both believe the artistic inspirations gained from overseas tours is well worth the months of meticulous planning and thousands of miles traveled.

“It’s one of the things artists do: share our art with the world and perform,” said Webre, who’s led the classical ballet company for more than a decade.

Accepting an invitation from Turkey’s Ministry of Culture and Tourism, Webre flew 17 of his Washington Ballet dancers to the county’s southwest Aegean shores in August to perform in the Bodrum International Ballet Festival. They danced for more than 2,000 Turks on an open-air stage adjacent to the 15th-century Bodrum Castle.

But instead of performing an expected classic such as “Swan Lake” or “Giselle,” Webre chose a cutting-edge ballet that would knock the socks off his audience. His ballerinas grooved to the Rolling Stones in pointe shoes and street clothes in a contemporary piece called “Rock & Roll.” Webre’s choreography — which he described as an “aggressive physical work about sexual persona” — included dancers stripping from cocktail attire to bustiers.

For Webre, sharing the bold movements with Turkey was exciting. “The U.S. has been at the forefront of extending the ballet repertoire and vocabulary in interesting new ways, and we enjoy sharing these ideas with the people in other countries,” he told us.

Although it was the Washington Ballet’s first professional visit to Turkey, the company has a tradition of touring and cultural exchange. During the 1980s and 1990s, it trekked to China, Japan, Malaysia, Singapore, Russia, Spain and South America; and in October 2000, Webre led the company on a historic tour of Havana, making it the first American ballet company to perform in Cuba since 1960.

Burgess, a New Mexico native of Korean descent, has also taken his dance company on tours around the world.

“I try to learn what a culture needs in terms of dance, what I can do to help, and what I can learn from them in return,” said Burgess, who’s choreographed, performed and completed workshops in more than 40 countries, including Germany, Bulgaria, Colombia, Latvia, Venezuela, South Korea and Russia.

Burgess said that besides folkloric and ethnic dance, many areas of the developing world have never heard of modern dance or the likes of Lester Horton or Martha Graham, and access to training in this athletic form of dance doesn’t exist in many countries. In recent workshops in Mongolia and Peru, for instance, locals drove four or five hours every day just to take Burgess’s class.

That’s one of the reasons why Burgess prioritizes international tours for his company. They’ve performed in India, Egypt, Mexico, Peru and Ecuador and completed workshops in small studios and sometimes makeshift dance rooms in a handful of other nations such as Pakistan and Mongolia.

His multicultural cadre of dancers boasts Japanese, Taiwanese, Egyptian, Peruvian, Irish and Scottish heritage — as well as a reputation for cultural insight and sensitivity. Works such as “Island,” depicting the turn-of-the-century mistreatment of Chinese immigrants in Angel Island off the coast of San Francisco, for example, have earned the company critical acclaim.

Burgess often conducts his own research into the history, cultural norms and dynamics of a country before starting a new dance residency abroad. In total, his group can speak conversationally in almost half a dozen languages and are often sought out by the State Department and various ministries of culture for their expertise — which was most recently on display in a State-sponsored tour to Ulaanbaatar, Mongolia, earlier this year. 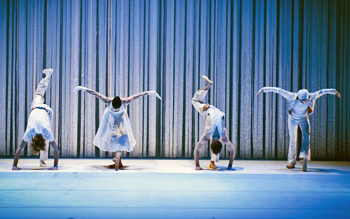 As part of its international touring, the Washington Ballet has traveled throughout Asia, South America and Europe. This past summer, it trekked to Turkey to perform in the Bodrum International Ballet Festival.

While both Burgess and Webre agree that sharing their art is the main reason they tour, they also both draw inspiration abroad as well.

Webre’s imagination went wild as he watched a whirling dervish’s ceremony in Turkey. The Sufis inspired him, and he hinted that traditional Ottoman music might manifest itself in an upcoming ballet season.

Burgess has had similar encounters. “My mind is filled with images of ancient dancers and postures which cover all the walls,” Burgess wrote in a company travel blog after visiting Egypt’s Valley of the Kings during a 2007 tour. “I look forward to getting back to the studio to choreograph!”

Burgess said he could not have developed his unique blend of modern dance without absorbing other cultures: “Without outer-world experience with different people, you can’t grow.”

Connie Fink, associate artistic director and dancer for Burgess & Co., said international tours are a perfect way to learn new styles of dance. “It’s more of an exchange rather than going and performing,” she explained. “It’s creating a community within another community, exchanging with strangers the value of dance and embracing their art as well.”

For instance, the Burgess dancers were blown away by the Colima Folkloric Ballet of Mexico and the hip-swinging dancers of Peru’s El Ballet de San Marcos, who invited them to a house party for some late-night salsa dancing.

Kelly Southall, a Burgess modern dancer of Irish descent, wrote in a company blog post about the irony of watching a version of “The Man in the Iron Mask” performed in Chennai, India, in the Bharatanatyam classical style of Indian dance.

And, of course, the mysticism of venturing to a foreign country also ignites a spark of creativity in the ballerinas and modern dancers — whether it’s hiking Machu Picchu, wriggling toes in Mexico’s black volcanic sands, ogling at wild moneys, or sensing echoes of the Roman Empire amid the ruins of Ephesus.

Katia Chupashko, a Burgess dancer, recalls performing in a garden courtyard in Cairo. Stagehands had swept the stage on an hourly basis, but the Egyptian wind had a way of blowing the desert sand past their brooms. She said she’ll never forget the small bits of sand crunching beneath her feat when the music started, reminding her that she was far from D.C.

“For a company, touring is very special and exciting,” Webre said, “and those tours often become the most special performances of any dancer’s career.”