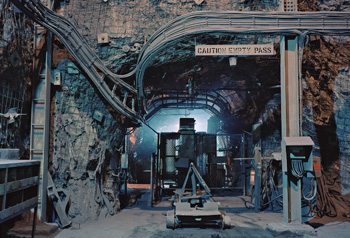 “Caution empty pass, Mount Isa, Australia” is among the images in “Wayne Barrar: An Expanding Subterra”.

There are times when you go to the American University Museum at the Katzen Arts Center and what you find are scattered little leaflets containing a bold smattering of ideas for art exhibitions that seemed to have dropped out of the sky and were picked up at random by museum director and curator Jack Rasmussen.

Ever since the Katzen Arts Center arose by Ward Circle, Rasmussen seems to have plunged himself into an almost subversive process of creating and assembling a panoply of exhibitions that don’t readily connect to one another, but together make up some of the most fascinating, cutting-edge shows in town. The museum space, three floors plus an outdoor sculpture garden, is ready-made for this kind of eclectic approach, aided with a flood of natural light and an expansive curatorial vision.

That vision consistently produces plenty to see — and the current grouping of shows is no exception, with offerings ranging from mysterious videos, flamenco dancing and gospel music to enormous photographs of the world’s man-made underground spaces, documentary images of a bygone Southwest D.C. and Depression-era workers, and selections from one of the city’s most forward-looking collections.

“Country Musicians. Near Toa Alta, Puerto Rico” is featured in the show “Re-viewing Documentary: The Photographic Life of Louise Rosskam.”

But in “Inner Piece: Works from the Heather and Tony Podesta Collection,” we see another side to this politico powerhouse. The films, paintings and photographs that they’ve collected from around the world is at the forefront of the Katzen fall lineup, as works by four celebrated contemporary artists offer clues about what’s happening on the international modern art scene.

Julie Roberts is a British painter whose work suggests vaguely unnerving social connotations. Some of her pieces depict medically related images — including a dismembered wax statue — against solid color backgrounds. Even more eerie though are her paintings that look like morbid children’s book illustrations, always slightly askew and thick with loud colors offset by a dream-like, ghostly quality. They have a lost-child quality to them, which may stem from Roberts’s own background as a foster child.

Laurel Nakadate is a photographer, performance artist and video artist who dismembers herself in a metaphysical way — exploring herself and the landscape of her body as an agent provocateur. In “365 Days: A Catalogue of Tears,” where the stated aim is to find, evoke and show sadness for every day of 2010, we see her with and without tears — or clothes — in hotel rooms, kitchens, hallways, airplane bathrooms, trains, cars and other backdrops. Often disheveled, entangled in emotional situations and bed sheets in her pursuit of the melancholy, she provokes not only sadness but other strange emotions, depending on the viewer’s interpretations.

In noted Irish filmmaker Clare Langan, we find an artist trying to place humans in epic landscapes in three short films that comprise her critically acclaimed “A Film Trilogy”: “Forty Below,” “Too Dark for Night” and “Glass Hour.” Here, lonely beings are placed in the vast spaces of deserts, icy tundra and fire, where they flitter and flow, yet seem to fade away into the expanse of their surroundings.

Finally, Spanish filmmaker Pilar Albarracín turns his lens on women and the injustice done to them, though her brief flamenco film is less overt about its gender messages as some of her other works are.

The Podesta collection — selections of which were also recently on display at the Phillips Collection — is only one of six new exhibitions at the Katzen. Two of the photographic highlights include “Wayne Barrar: An Expanding Subterra” and “Re-viewing Documentary: The Photographic Life of Louise Rosskam.” 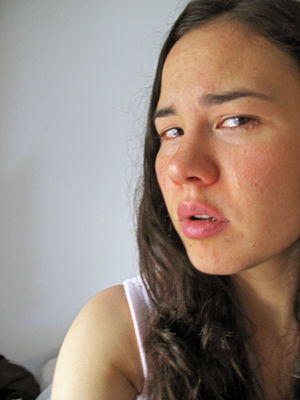 Laurel Nakadate’s self-portrait series “365 Days: A Catalogue of Tears” is part of the exhibition “Inner Piece: Works from the Heather and Tony Podesta Collection” at the Katzen Arts Center.

New Zealand photographer Barrar captures a subterranean world that is nothing less than otherworldly. His large photographs of underground, man-made spaces — leftover mines, a restaurant, office space and tunnels created in New Zealand, Australia and the United States — echo science fiction films but are completely real, a hollowed-out series of domiciles and enterprises by people making the most of their surroundings or escaping the harsh conditions above ground.

Thus we see the subterranean homes in Coober Pedy, an opal mining town in south Australia where residents shield themselves from the scorching heat of the Australian outback by living down under, quite literally. We also unearth a hodgepodge of hidden mines, power stations, universities, storage facilities and offices — an entire bustling life below our feet that Barrar deftly brings to the surface.

“Re-viewing Documentary” shifts gears back to the more familiar though no less engrossing images of life in particular places at very particular times. The series of large, expansive and almost exhausting photographs examines the previously unexamined career of Louise Rosskam, described as “an elusive pioneer of the golden age of American documentary photography” in the 1930s and 1940s.

Rosskam documented migrant workers during the Great Depression and chronicled the changes that swept the hazy territory of Puerto Rico, as it evolved from an impoverished U.S. possession to an industrialized commonwealth. She also took rare photographs of Southwest Washington, D.C., in the 1940s before neighborhoods were lost to urban riots and renewal. More than 150 vibrant images of bygone grocery stores and old-fashioned Coca-Cola signs record and resurrect an important part of the nation’s capital that today only lingers in pictures and memory.

Rosskam’s own critical work hop scotching from D.C. to Puerto Rico is emblematic of the roaming nature of the American University Museum itself, populated this fall with subterranean dwellings, flamenco feminism and bodies in transition — a potpourri of art that’s found a home under the Katzen’s creative canopy.

“Inner Piece: Works from the Heather and Tony Podesta Collection”