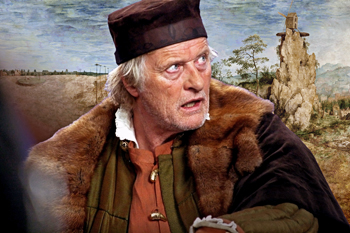 Also See: ‘Rebirth’ and ‘The Skin I Live In’ and Repertory Notes

Rutger Hauer portrays Flemish painter Pieter Bruegel the Elder in “The Mill and the Cross,” which translates Bruegel’s masterpiece depicting the Passion of Christ onto the big screen.

Polish writer-director Lech Majewski’s visually dazzling “The Mill and the Cross” followed up its world premiere at the 2011 Sundance Film Festival with its French premiere at the Louvre. The world’s most famous art museum was a fitting venue for the audaciously ambitious film about Flemish master Pieter Bruegel the Elder’s iconic 1564 painting, “The Way to Calvary” (also known as “Jesus Carrying the Cross”), which is currently housed in the Kunsthistorisches Museum of Vienna. Bruegel’s masterpiece transplants the tale of Christ’s Passion to 16th-century Flanders, which is suffering under a ruthless Spanish occupation in the name of the Inquisition, filling the sweeping canvas with more than 500 characters.

“The Mill and the Cross” successfully translates Bruegel’s piece into a mesmerizing cinematic painting, in which live actors actually play their scenes against a two-dimensional background, painted by Majewski himself, as well as landscapes shot on location in Poland, the Czech Republic, Austria and New Zealand. The stunning cinematography by Majewski and Adam Sikora captures Stanislaw Porczyk’s well-conceived art direction, while the arresting images are complemented by a stirring original musical score by Majewski and Józef Skrzek. The intelligent script, adapted by Majewski (the screenwriter of “Basquiat”) and art critic Michael Francis Gibson from Gibson’s book, pointedly comments on the universal themes of human rights and religious freedom.

The cumulative result distills Bruegel’s expansive vision into a digestible story with about a dozen characters, taking the audience into the world in which the villagers live, interrupted by the intrusions of the red-coated Spanish soldiers as they try to stamp out Protestant Reformation with casual brutality. The painter’s friend and patron Nicolaes Jonghelinck (English actor Michael York) has commissioned the “The Way to Calvary” to mark the Spanish Army’s impending public execution of Christ. The film opens with Bruegel (Dutch movie star Rutger Hauer) himself meandering around inside his own work-in-progress. He explains, “I will work like the spider this morning, building its web.”

Bruegel discusses his creative process in discussions with Jonghelinck. Serving as a narrator, the painter further elaborates on his creation as other characters inhabit the screen, notably the Virgin Mary (English actress Charlotte Rampling). Dialogue is sparse, as is character development, but the lush visual effect tells a story of religious persecution and artistic genius in a way that speaks for itself. 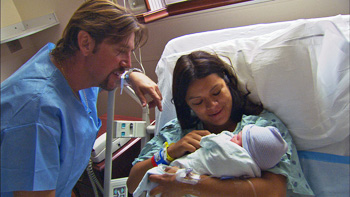 Tanya Villanueva Tepper is pictured with her husband Ray Tepper and newborn baby in the 9/11 documentary “Rebirth.”

Filmmaker Jim Whitaker’s poignant documentary “Rebirth” carefully looks at the impact of the terrorist attacks of September 11, 2001, on the lives of five people directly affected in huge ways. Whitaker started shooting interviews in the spring of 2002, returning each year since then to revisit the individuals and track their recovery from the trauma. The exhaustiveness and rigor of Whitaker’s approach provides a richness in detail that’s unlikely to be duplicated by other 9/11 documentaries.

After losing his mother, an investment banker who worked in the World Trade Center, high school student Nick Chirls wants to follow in her footsteps. He starts out with nearly uncontrollable rage at her killers and his father. As the anger fades over time, he reconciles his feelings and forges his own path.

After suffering crippling burns, accountant Ling Young struggles to resume a semblance of a normal life, undergoing forty reconstructive surgeries. Initially, she suffers from major depression and is unable to do anything without her family’s assistance, except sitting around the house watching television. As she regains some functionality, her spirit resumes — as well as her acceptance of how lucky she is in life.

Tanya Villanueva Tepper lost her fiancé, a firefighter who died serving as a first responder. She copes with her devastating grief by moving to Florida, where she gradually resumes dating, eventually marrying and having children. She incorporates her new family into her visits with her ex-fiance’s family as that’s the only way she can stay in their life.

Firefighter Tim Brown directs his energy toward increasing the safety of the United States from future terrorist attacks. As a founding member of the Department of Homeland Security, he realizes he doesn’t miss his friends in New York — because they’re all dead. After returning to Manhattan for a spell, he joins Rudy Giuliani’s presidential campaign to promote the former New York mayor’s national security credentials. 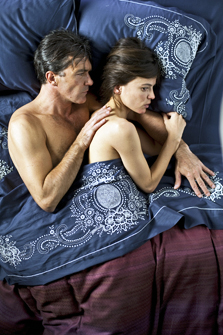 Antonio Banderas, left, is a plastic surgeon and Elena Anaya is his human guinea pig in Pedro Almodóvar’s “The Skin I Live In.”

With “The Skin I Live In,” Spanish auteur Pedro Almodóvar resumes working with Spanish actor Antonio Banderas (Almodóvar’s 1990 “Tie Me Up! Tie Me Down!” and 1988’s “Women on the Verge of a Nervous Breakdown”) after a 21-year absence. The long-awaited reunion enables the movie star to return to top form with a distinguished subtle performance in his native language, after a Hollywood career of mixed critical success.

Almodóvar (“Volver,” “Bad Education,” “Talk to Her,” “All About My Mother”), with assistance from Agustín Almodóvar, adapted the script of “The Skin I Live In” from Thierry Jonquet’s novel “Mygale.” The lively result deploys frisky elements reminiscent of the mad sex comedies that captured the world’s attention when Almodóvar was working with Banderas in the late 1980s. Besides solid acting and writing, “The Skin I Live In” succeeds as a visual feast with José Luis Alcaine’s haunting cinematography, Antxón Gómez’s stunning production design, and Carlos Bodelón’s beautiful art direction.

Born into a rich family, Brazilian-born plastic surgeon Robert Ledgard (Banderas) commands respect with a successful practice in Toledo, Spain. Yet he cannot avoid tragedy. His unstable daughter Norma (Blanca Suárez) is raped at a garden party. When his wife is badly burned in an auto accident escaping with her lover, Dr. Ledgard attempts to save her with an experimental pig skin graft. After both his wife and daughter take their own lives by jumping out a window, Ledgard seeks revenge.

For years, he locks up young Vera (Elena Anaya), whose identity is a mystery, using her as a human guinea pig to perfect his invention, a type of synthetic skin that withstands any kind of damage. Befitting a proper Almodóvar story though, Ledgard has plenty of secrets as he methodically wields his scalpel to carve out his obsessive vision.

The Initiative for Russian Culture


The Initiative for Russian Culture (IRC) at American University aims to expand the awareness of Russian culture among Americans and strengthen ties between Russian and American youth. October film screenings held at the Russian Embassy include “The Cranes Are Flying” (Oct. 6), “Ballad of A Soldier” (Oct. 20) and “My Name Is Ivan” (Oct. 27).


The DC APA Film Festival (Oct. 6-15) presents more than 50 features and short films in theaters throughout Washington. On Oct. 8., the documentaries “Anna May Wong: In Her Own Words” (1 p.m.) and “Big in Bollywood” (3:30 p.m.) screen at the Freer Gallery of Art. On Oct. 13, commemorating the Centennial of the Republic of China, the Taipei Economic and Cultural Representative Office in the United States (TECRO) presents contemporary films “Cape No. 7” (7 p.m.) followed by “The Fourth Portrait” (9:30 p.m.) at Landmark’s E Street Cinema.

“Divided Germany – Fifty Years Construction of the Berlin Wall” (through Oct. 28) includes films, discussions and an exhibition about the Berlin Wall’s historic separation of West Berlin not only from East Berlin, but also from East Germany. The screening of “Face the Wall” (Tue., Oct. 18, 6 p.m.), a documentary on victims of the Berlin Wall, is followed by a panel talk with director Stefan Weinert and Hope M. Harrison of the George Washington University.


“Fantômas” (Oct. 2-8) celebrates the 100th birthday of the popular pulp-fictional arch-villain Fantômas, a character developed by authors Marcel Allain and Pierre Souvestre and made famous by Louis Feuillade’s silent movie serials shot for the Gaumont Company.

Presented in conjunction with the Embassy of France, “Le Cinéma Fantastique” (Oct. 23-Dec. 31) “shows the occurrence of the uncanny and the ‘not rational,'” according to French writer Pierre Gripari, who says it “finds a way into fairytale, horror, melodrama, even detective films.”

“American Originals Now: Lynne Sachs” (Oct. 16-23) allows audiences a chance to discuss Sachs’s essay films that draw on her interests in sound design, collage and personal recollection with the filmmaker herself. Sachs investigates war-torn regions such as Israel, Bosnia, and Vietnam, striving to work in the space between a community’s collective memory and her own subjective perceptions.