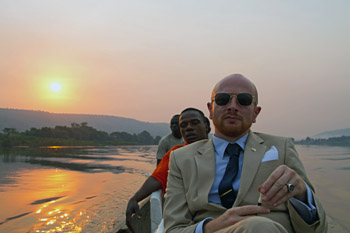 Danish filmmaker Mads Brügger stars as a crooked diplomat trying to nab African blood diamonds in the documentary “The Ambassador.”

Where did the time go? It’s hard to believe that the AFI-Discovery Channel Silverdocs Documentary Festival just made its 10th appearance in the Washington area. Since the beginning, The Washington Diplomat has covered this once-nascent fest that has developed into arguably the most prominent documentary film festival in the United States. And as a special treat for Diplomat readers, two international films at Silverdocs 2012 highlighted ambassadors.

“The Ambassador,” the latest work from Danish filmmaker Mads Brügger (“The Red Chapel”) screened in the Silver Spectrum program of Silverdocs. The documentarian delves into and reveals a seedy, underground marketplace in which impoverished Third World countries sell off diplomatic passports to the highest bidder, sometimes throwing in an official diplomatic position. Using mostly hidden cameras, he films the process for the record deploying a humorous, highly personal approach in the vein of Michael Moore (also see “‘Ambassador’ for Sale: Diplomatic Imposter Goes Undercover to Expose Corruption in Africa” in the May 2012 issue of The Washington Diplomat).

Brügger strives to become an ambassador to the Central African Republic (CAR), an appointment that would permit him to remove unlimited quantities of blood diamonds out of the country in his unsearchable diplomatic black bag. The filmmaker sports a fancy suit and a shaved head to pose as “Mads Cortzen.”

He traverses the CAR working on his diamond deal, which mostly consists of handing out bribes in the form of “envelopes of happiness.” He invests in the diamond mine owned by Dalkia Gilbert, a powerful CAR figure running for Parliament.

In the meantime, Brügger builds up his cover story: He’s starting a match factory in which pygmies would work — a sort of affirmative action program to assist minorities in the CAR.

Along the way, Brügger has some close brushes with the shady characters who pepper his documentary, but he eventually scores his diplomatic credentials, a sad reflection of how money really does buy power, even in the supposedly hallowed world of diplomacy.

At the 2012 Sundance Film Festival, Brügger garnered a nomination for the Grand Jury Prize in World Cinema – Documentary, and at the 2012 Robert Festival, “The Ambassador” took the top prize for Best Documentary.

‘The Ambassador and Me’ (short) 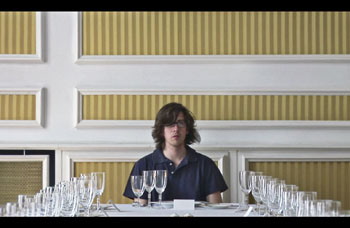 Polish director Jan Czarlewski follows his workaholic father in “The Ambassador and Me.”

Polish director Jan Czarlewski’s poignant film “The Ambassador and Me,” which played in the Sterling Short Film Competition at Silverdocs, chronicles the life Czarlewski’s father, a workaholic who has poured his life into his career as a Polish diplomat, statesman and national hero. “He has dedicated his whole life to his country, but he never had any time for me,” the filmmaker laments.

Czarlewski seeks to remedy their lack of a relationship by traveling to Brussels, the site of his father’s latest diplomatic posting.

During the trip, Czarlewski records his father in various activities, including a tennis match, a wreath laying, working at the office, and resting in bed. Unfortunately, the senior Czarlewski rebuffs his son’s attentions, becoming annoyed at being filmed and interviewed and insisting that a discrete profile at the embassy is critical to the success of his career.

When he’s frequently alone, the junior Czarlewski films silent periods reflecting the palpable distance that’s always existed between father and son. Still, the documentarian’s efforts are not strictly Quixotian, as the pair does come to learn somewhat more about each other.