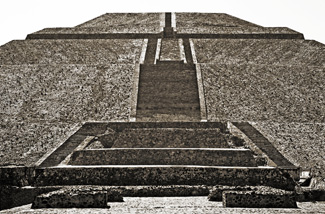 Arthur Drooker spent three years photographing ruins, some familiar, others obscure, in 15 countries across the Americas — among them, the Pyramid of the Sun in Teotihuacan, Mexico.

Two years ago, photographer Arthur Drooker was sitting beside the majestic ruins of Saint-Pierre, a city in Martinique that was devastated by a volcano in 1902, waiting for a fickle wind to blow some puffy clouds into the frame of a photo he hoped to take. Drooker was prepared to wait all day to get the shot and when his girlfriend, Ivy, agreed to wait with him, he decided that she was the woman he would marry.

Visitors who venture to see “Lost Worlds: Ruins of the Americas” will experience that labor of love in this stunning collection of haunting, ethereal black-and-white photographs shot with a special infrared camera that helps capture especially dramatic contrast and light. Drooker’s photo exhibit, which is currently on display at the Organization of American States (OAS) Art Museum of the Americas, features images of 33 ruins, some familiar, others obscure, in 15 countries across the Americas.

The ruins aren’t necessarily what one might expect. Aside from classic sites like Machu Picchu and Palenque, there are also images of colonial palaces, sugar mills, fortresses, churches and more relics that, according to the gallery, speak to the region’s culture, conflicts and conquests. Museum curator Fabian Goncalves, a native of Buenos Aires who has worked at the OAS for 13 years, believes that the common bond in the images is that they serve to remind people of the region’s fascinating history.

“We look at these images as a kind of overview of us as Americans, how we are and how we came to be Americans, from the Spaniards to the British to the French,” he said. “In photographing these places, he helps us keep the memory and the history of them alive.” 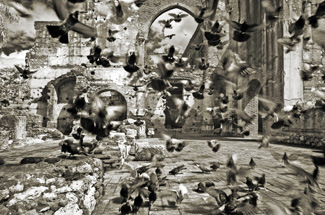 Drooker, 57, has been passionate about photography since childhood, but majored in history in college and worked as a freelance writer and director of documentaries for the History Channel and other outlets for more than 20 years. In 2007, he decided to combine his love of history with his passion for photography, undertaking a project to photograph ruins across the United States. After publishing a book documenting the project, he decided to travel across Mexico, South America, Central America and the Caribbean to document more ruins.

“I love ruins because of their inherent mystery,” Drooker said in a recent telephone interview from his home in San Francisco. “For me photographing ruins is a way to commune with our ancestors and to make people aware of these places and their history in a poetic way.”

In creating the collection, which is also documented in a beautiful coffee table book, Drooker made 10 trips to 15 countries over three years, occasionally with his girlfriend, but mostly alone, and on the cheap. He received some support from a few of the national tourism boards in the Caribbean, but financed most of the trips on his own, thanks in large part to the profitable sale of a home in Los Angeles.

Drooker shot the ruins with a Canon 5D Mark II, which was custom-fitted to capture infrared images that produce high contrast and an almost ghostly white sheen of light. One of the most arresting themes in the collection is his use of clouds to complement the landscapes. 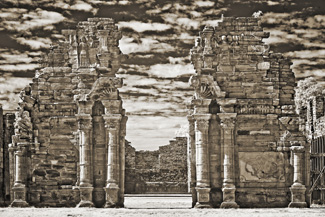 “Pico Iyer, who wrote the foreword to the ‘Lost Worlds’ book, said that the clouds were ‘protagonists,’ and I think that was a great observation because the way the infrared photography renders clouds, they take on a more robust prominence that you wouldn’t normally get,” explained Drooker, who plans to exhibit the collection in Sacramento and at the San Francisco International Airport after it leaves Washington.

There are a number of show-stopping images in the collection, including an evocative shot of seagulls fleeing the ruins of Santo Domingo’s San Nicolás de Bari, a 16th-century hospital that was the first built in the New World; a classic shot of Tiwanaku Temple in Bolivia circa the year 500; and an eerily beautiful photo depicting the ruined Sans Souci Palace, the early 19th-century home of Haiti’s King Henry I, the first black king in the New World.

“The Sans Souci image is a good example of history’s cyclical nature,” said Goncalves, who previously worked as a curator at the Latin American Art Museum in Buenos Aires. “Henri was a slave; he rose against the French, he became king and turned into a tyrant. There was a revolt inside his own army who toppled him; he suffered a stroke and then killed himself inside this palace.”

Drooker hopes that the exhibit inspires people to learn about these forgotten chapters in the region’s history.

“I hope people come away with an appreciation for the photography,” he said. “But also for the history and these stories behind the abandoned sugar mills and ruined cities and all the rest, because they tell us a lot about ourselves.”

Watch a video tour of “Lost Worlds: Ruins of the Americas” with curator Fabian Goncalves online at: www.youtube.com/watch?v=jK_sbPEJYkw&feature=youtu.be

Lost Worlds: Ruins of the Americas, Photographs by Arthur Drooker

Dave Seminara is an award-winning freelance photojournalist and former diplomat based in Northern Virginia.