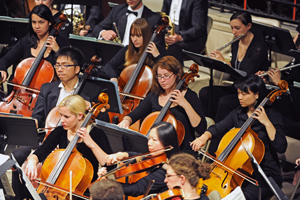 U.S. astronaut Neil Armstrong listened to Antonín Dvorák’s symphonic masterpiece “From the New World” during his historic landing on the moon. Meanwhile, the famous Czech classical composer found inspiration in the music of Native and African Americans in the United States, where he lived from 1892 to 1895 as director of the National Conservatory of Music in New York City — a far cry from his humble roots in a Czech village outside of Prague. Many of the students Dvorák taught in New York would later instruct American musical icons such as George Gershwin and Duke Ellington.

These cross-cultural connections form the backdrop of “Mutual Inspirations,” a citywide musical festival spearheaded by the Czech Embassy in Washington in honor of Antonín Dvorák’s 170th birthday.

More than 500 local and international artists will perform in 30 concerts and events, many American or world premieres, at more than a dozen venues across town, from the Washington National Cathedral, to the Phillips Collection, to the National Gallery of Art. The festival — held under the patronage of Czech Foreign Affairs Minister Karel Schwarzenberg — starts Sept. 8, the day of Dvorák’s birthday, and ends Oct. 28, the Czech National Day.

Highlights include a concert-drama of Dvorák’s famed “New World” symphony held at the National Museum of the American Indian on Sept. 17 featuring the Catholic University of America Orchestra. Also, on Sept. 25, the Basilica of the National Shrine of the Immaculate Conception pays homage to Dvorák and to the 200th birthday of Saint Jan Nepomucene Neumann in a special mass celebrated with Dominik Duka, the archbishop of Prague.

On Oct. 1, the Library of Congress gets in on the action with an exclusive symposium led by Dvorák scholar Michael Beckerman, who will address the composer’s dream of portraying the soul of American music through African American rhythms. And on Oct. 28, the Washington National Cathedral concludes the festivities with Dvorák’s “Columbian Te Deum” presented by the 150-voice Cathedral Choral Society and special guest soprano Alexandra Berti from the Czech Republic.

The Czech Embassy itself is hosting a variety of events as well, including a concert in collaboration with the Embassy Series on Oct. 21 (see other sidebar), another collaboration with Washington Musica Viva for the world premiere of “Dvořák Jazz Dances” by contemporary composer Charley Gerard, along with an exhibit that runs throughout September of paintings and photographs inspired by Dvorák’s timeless “New World” symphony.

For a complete listing of events, visit www.mutualinspirations.org.

Anna Gawel is managing editor of The Washington Diplomat.