Home The Washington Diplomat September 2011 Are the Rigors of Testing Producing Generation of Students Under Strain? 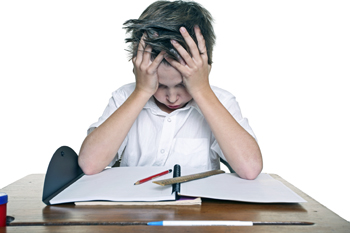 If you’re older than 20, chances are you look back on childhood as an easy time when the biggest decision you faced was when that next game of tag with your friends would be. But youngsters today might have different memories when they’re older. They may look back at their formative years and say, “Remember your standardized test prep?”

Case in point: A kindergartener in Arlington, Va., tells her family about her day at school, and after listening to what she learned, her third-grade brother says, “You should really remember what you’re learning in kindergarten because they’re going to be testing you on some of this stuff in third grade.”

The test that third-grader referred to is a standardized one required of public school students nationwide under the No Child Left Behind Act, passed Jan. 8, 2002, during the administration of President George W. Bush. Considered the most sweeping change to the Elementary and Secondary Education Act of 1965, No Child’s stated goal is equal educational achievement among students across the country. Failing to comply with the law means less federal dollars for schools receiving Title I funding, which is granted to school districts with many students living at the poverty level — 90 percent of schools nationwide, according to an overview of the law on PBS.org.

In addition to boosting accountability, the other implicit goal of No Child is to add unity and clarity to the current patchwork of local school systems so that students in Alabama are educated to the same standards as those in California or Vermont.

But many teachers and parents worry that although the new test-centric culture is supposed to gauge students’ comprehension of materials, it also ends up forcing the schools to prove themselves.

Proponents of standardized testing say that’s not necessarily a bad thing, pointing to statistics that in many parts of the country show increased proficiency in the core subjects of reading, math and science.

“Personally we think that testing is very important in order to get tools to improve the education of our children and know their educational needs,” said Rodrigo Rojas, minister counselor at the Embassy of Colombia. He has two daughters, a seventh-grader at Julius West Middle School and a third-grader at Beall Elementary School, both in Rockville, Md.

But opponents decry the exams, saying they put too much strain on children and that kids are studying only to pass a test rather than learn the actual material.

The debate is especially relevant in the Washington area, where overachievement is the norm — starting from kindergarten all the way up to high school, college and beyond. Whether it’s a third-grader barely able to lift a backpack overloaded with books, the high school senior taking adrenaline pills to stay up and study for a test so they can get into a good university, or their parents working a typical 12-hour Washington workday, the pressure to succeed is deeply ingrained in the D.C. mindset.

“It’s putting too much pressure on children and taking them away from learning how to think and how to solve problems as opposed to what they’re trying to do now, which is teach them the things that might be seen on the test,” the Arlington mom said. “I think teachers need to know what their children are learning, but I really think it takes away from learning in the moment and learning how to think and process.

“We’re missing out on the great stuff of education in terms of teaching children how to think and how to give them open-ended questions and ways to solve different kinds of problems rather than A, B, C or D,” she added. “I think it’s more of a society kind of thing, especially in the area that we live in, where there are high expectations for children and for schools.”

Testing is nothing new and has been around since at least the early 1900s. But rather than a pop quiz checking a student’s mastery of a given week’s spelling list, this new generation of exams has become a high-stakes evaluation that can determine whether students move on to the next grade or earn a high school diploma — and whether schools qualify for critical federal funds.

“It certainly changed the face of education,” Riddile said of standardizing testing. “For example, 15 years ago, only about 20 percent of the students in the country took algebra I. Today and since 2004, every student in Virginia has to not only take algebra I in high school and pass it, but they have to pass the state algebra exam as part of their requirements to graduate from high school. It’s a much different world than the world the parents of kids who are in school today grew up in.”

Ensuring that students earn the degrees they receive is of course the pro. The con is that the tests are motivators only for typically underachieving kids. “For the above-average student, standardized state tests are more of an inconvenience and a nuisance than they are anything else,” Riddile observed.

Those kids would rather focus on college-entry exams such as the SAT or resume-enhancing ones like Advanced Placement (AP) and International Baccalaureate (IB) tests. Passage of the latter two is considered equivalent to passing college-level courses.

Performance on those is where most of the real achievement anxiety comes into play, according to Riddile, because more kids than ever before are applying for acceptance to competitive colleges. “Colleges are besieged with applications in record numbers,” he said. 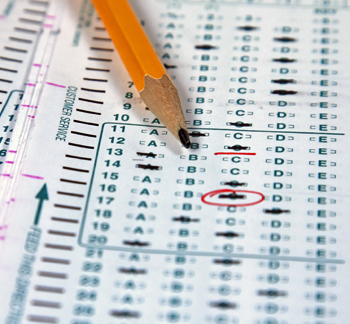 High stakes can translate into high anxiety. Documentaries such as “Race to Nowhere” and books like “The Blessing of a Skinned Knee” by Wendy Mogel are fighting back against the education reforms, saying the pressure to perform is creating a generation of stressed-out students obsessed with acing tests.

Dr. Angelica Kloos, assistant professor of pediatrics in the Department of Child and Adolescent Psychiatry at Children’s National Medical Center, said she has been seeing students with high anxiety over passing tests related to the D.C. Comprehensive Assessment System, the Virginia Standard of Learning and the Maryland School Assessment, in addition to their regular midterms and finals. “It is hard to say where the pressure comes from,” she said. “I believe it comes from a combination of several influences. Society and familial pressures may be internalized in some children, leading to a higher likelihood of experiencing negative school pressure.”

Warning signs of stress include avoidance of school and related activities; frequent, nonspecific body aches, such as headaches and stomachaches, for which no medically related cause is found; difficulty sleeping; and behavioral changes, such as irritability, tantrums and aggression that appear worse on school days, Kloos explained.

Being a student in a high-powered city like D.C. and its surrounding suburbs might not help either, she added. “I would guess that the pressure to achieve is higher in areas like D.C. or New York, where there is perhaps an emphasis on educational and financial success.”

Indeed, the Washington region is home to 300-plus private or independent schools, according to Washingtonian magazine. Many are exclusive — and expensive — institutions that attract children of the city’s business and government elite (including numerous diplomats) and also have a reputation for churning out leaders in society. Yet despite being bastions of educational achievement, they don’t have to adhere to mandatory standardized testing.

The Washington International School (WIS) is a private school whose curriculum is based on the IB program. Instead of the D.C. Comprehensive Assessment System, the school’s 900 pre-kindergarten through 12th-graders from 90 countries periodically take standardized tests offered by the Educational Records Bureau and the International Schools’ Assessment. “These tests give us the opportunity to compare how our students are doing in reading, writing and mathematics as compared to students in other independent and international schools,” said Jim Reese, middle and upper school curriculum and staff coordinator. “The International Baccalaureate Diploma Program exams, which our grade 12 students take as school-leaving exams, are standardized as well.”

To help students cope with pressure and prep for the tests, WIS builds independent study into their days and holds seminars on stress reduction. “For students in grades six to 10, we have advisory and life skills programs, as well as special assemblies that at various times throughout the academic year focus on effective time management, organizational skill development and stress reduction,” Reese explained.

But William Layman, director of admissions at the independent Field School in Georgetown, said not all schools are test-happy — or convinced of their usefulness. For instance, Field doesn’t offer AP classes.

“I think for most parents they think, ‘Well, how are you going to get into a good college if you don’t have a lot of AP classes on your transcript?’ The truth is AP classes … are classes whose primary motivation, virtual sole motivation, is to prepare you for that AP test. That AP test is a test that’s written somewhere else and basically covers a whole lot of facts,” Layman said. “The idea of firing facts at kids like they were tennis balls coming out of one of those tennis ball machines … that’s just not how we see education.”

Lots of factors affect student performance in school, but life away from school — in the home — is perhaps the biggest.

Fairfax County, Va., is the highest educated in the country, and parents there give their children an academic edge by virtue of their own experiences, he said. “When their children are young, they expose them to more vocabulary, those kids enter school with a clear cognitive advantage in terms of language skills, they often become better readers and that leads to better math, and they’re better students all around — not because they have more ability, but because poorer kids don’t have the resources that middle-class kids have. When those under-resourced kids enter school, schools have to try to make up the deficit from the day they walk in.

“It’s not about ability,” he summarized. “Sometimes it’s about who your parents are, what the expectations are, and what you’ve been exposed to.”

But what kids are exposed to, many experts agree, should include some time to be a kid. “As a mother and a teacher, I find the American teen years are often filled with academic and social stress,” said one English teacher at Richard Montgomery High School in Montgomery County, Md. “I think teens are best off when they are fully involved in school and co-curricular activities…. Parents need to focus and keep kids focused on real achievements, and not define success by admittance into Harvard, Yale or Stanford.”