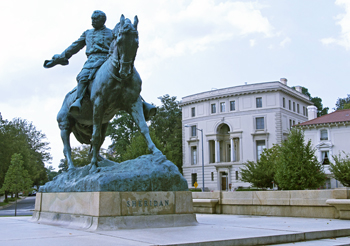 While 150 years have passed since the Confederate bombardment of Fort Sumter in the waters off Charleston, South Carolina, sparked the Civil War, many of the Union’s leading generals can still be seen walking or riding the streets of Washington, D.C. A surprising number of bronze and stone memorials to American military heroes can be found along Massachusetts Avenue, NW, ensconced among the foreign embassies, chanceries and ambassadorial residences of Embassy Row.

Many of the top Union brass, alas, are located elsewhere: Their commander in chief, Abraham Lincoln, is honored elsewhere throughout the city, most notably at the Lincoln Memorial on the National Mall. Union Gen. Ulysses S. Grant, in charge of overall command of the Union Army and later elected president, has a place of honor in front of the U.S. Capitol in the largest sculptural formation dedicated to any American war hero. President James Garfield, a major general in the Civil War who was later elected president and assassinated in the first year of his term in 1881, has a monument nearby. William Tecumseh Sherman’s equestrian statue, honoring the famed architect of the Union Army’s scorched-earth “March to the Sea” campaign in Savannah, Georgia, lies just south of the U.S. Treasury Department building near the White House’s Ellipse green space.

As for the Confederate generals who made up the Southern secessionist forces — well, to the victor belong the statue spoils. An exception is Albert Pike, a Confederate general pardoned by President Andrew Johnson (in part, some surmise, because both men were freemasons), whose statue lies near Judiciary Square.

Still, learning about the many field command generals and admirals of the Union Army and Navy who line Embassy Row can make for a pleasant stroll through both history and some of Washington’s most desirable neighborhoods.

These Civil War heroes benefited from a remarkable confluence of events. The growth, both during and after the war, of the very federal government that the Union sought to preserve drove the expansion of Washington, D.C. The conflict that nearly split the nation apart and killed more than 600,000 soldiers was still fresh on everyone’s mind — and the main characters of that conflict were obvious choices to be centerpieces for the city’s newly landscaped monumental circles and squares.

Here’s a look at some of the cast of Civil War personalities whose memorials now populate Embassy Row, going southeast along Massachusetts Avenue, NW:

Union Gen. Philip H. Sheridan is depicted in a scene from his most famous Civil War victory, the 1864 Battle of Cedar Creek in Shenandoah Valley, Va., in the circle that bears his name and houses embassies such as Greece, Latvia and Ireland, as well as the Egyptian Residence, pictured.

At the center of the circle’s wide, grassy field lies a bronze equestrian statue of the diminutive, mustachioed Sheridan, a pugnacious and famously aggressive Union cavalry officer who was the George Patton of his day, in a scene from his most famous victory, the Battle of Cedar Creek in the Shenandoah Valley, Va., in 1864. Sheridan, on his prized warhorse Rienzi, rushed nearly 20 miles from Winchester, Va., toward his soldiers, who were retreating after an initial Confederate attack. Waving his hat as Rienzi reared up, Sheridan persuaded them to return to the front to mount a counterattack that led to a Union victory. The sculpture, designed by Mount Rushmore sculptor Gutzon Borglum, captures the action beautifully and is mounted on a low pedestal, allowing a particularly good view.

If William Sherman’s scorched-earth campaign that obliterated parts of the Deep South made him reviled among many as the “Scourge of the South,” Philip Sheridan’s campaigns in the Shenandoah Valley, the breadbasket for Confederate military commander Robert E. Lee’s troops, had a similar purpose and end. After laying waste to that valley, Sheridan himself wrote in his report, with typical directness, that, “A crow would have had to carry its rations if it had flown across the valley.” Rienzi, renamed Winchester after the battle, lives on at the National Museum of American History, where the stuffed and mounted horse is on display. Sheridan is buried in Arlington National Cemetery.

The circle that bears his name is remarkable because, unlike many of the other Massachusetts Avenue circles and squares — notably Dupont Circle — the spectacular original beaux-arts mansions built around it at the turn of the 20th century remain intact. Jutting out from Sheridan Circle are the embassies of Greece (designed by famed architect George Oakley Totten), Latvia (the former residence of renowned painter and arts patron Alice Pike Barney), Ireland and Romania, the South Korean chancery, as well as the ambassadorial residences of Egypt and Turkey (the palatial former house of bottle cap magnate Edward Everett, also designed by Totten). A small memorial on the southeast corner of the circle memorializes the 1976 assassination that took place on Sheridan Circle of exiled Chilean Foreign Minister Orlando Letelier and a friend by assassins sent by the Pinochet government. 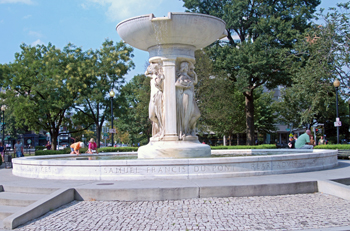 The family of Samuel Francis Du Pont thought that the original statue built to honor the Civil War hero was too stiff, so the family replaced it with the current monument depicting three allegorical figures that anchors Dupont Circle.

At the center of one of the city’s largest and most well-known traffic circles is a marble fountain honoring the Civil War admiral, though Du Pont himself is not depicted. Du Pont was the hero of the Battle of Port Royal, South Carolina, whose capture in 1861 allowed the Union to establish a critical naval blockade further south off the coasts of the Confederate states of Georgia and Florida. Du Pont subsequently led a failed attempt to capture the heavily defended port of Charleston, South Carolina, a defeat for which he was blamed. However, a later investigation determined that senior commanders had ordered the assault despite misgivings expressed by Du Pont.

Du Pont was born into the famous industrialist family of the same name, but ironically his branch of the family had not yet attained wealth when he was a boy. Thus, at the tender age of 12, he joined a U.S. Navy ship as a midshipman, launching a stellar career in which he rapidly advanced, along the way increasing professionalism, improving training, and fighting corruption in the U.S. Navy.

After Du Pont’s death soon after the Civil War’s conclusion, the Du Pont family pressed Washington to authorize a monument in his honor, which was eventually granted, resulting in a stiff statue of Du Pont standing at attention. Never popular, the family itself offered to replace that statue with the current monument designed by Daniel Chester French, sculptor of the iconic Abraham Lincoln statue in the Lincoln Memorial, which was erected in 1922. The Dupont Circle statue depicts three allegorical figures representing attributes necessary to any seaman’s success: a woman, Sea, holds a ship in her hands; a man, Wind, holds a billowing sail; and a second woman, Stars, holds a globe with one small star visible. An inscription at the statue’s base mentions Du Pont himself.

While no embassies are located directly on Dupont Circle, the PNC bank building on the northeastern corner occupies the space of a mansion that once housed the former Chinese legation in a mansion that was later torn down. The Embassy of Portugal is just northwest of the circle on Massachusetts Avenue, and the Colombian ambassador’s residence is nearby as well, on 20th and Q Streets. Also of note on the circle are the historic Patterson and Wadsworth beaux-arts houses at P Streets and Massachusetts Avenue, respectively. 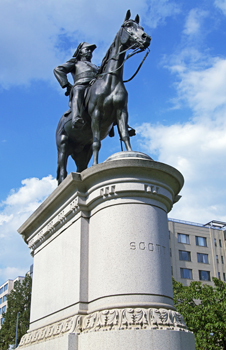 In addition to gaining fame during the Civil War, Lt. Gen. Winfield Scott was also a hero of the War of 1812 and the Mexican-American War.

Just north of Dupont Circle at Connecticut Avenue and Q Street, carved into the stone along the lip of the north escalator entrance to the Dupont Circle Metro Station, are verses from poet Walt Whitman’s poem “The Wound-Dresser,” describing his experience tending to wounded Civil War soldiers as a volunteer nurse when he stayed in D.C. during the war: “Thus in silence in dreams’ projections / Returning, resuming, I thread my way through the hospitals / The hurt and wounded I pacify with soothing hand / I sit by the restless all the dark night — some are so young / Some suffer so much — I recall the experience sweet and sad…”

The bronze equestrian statue of Scott, the general in chief of the Union forces at the start of the Civil War and a hero of the War of 1812 as well as the Mexican-American War, is situated on a tall pedestal and was cast by sculptor Henry Kirke Brown from cannons captured by Scott during the Mexican-American War. Scott, looking distinguished in mutton chop sideburns, holds the reins with one hand and the other elbow out akimbo. The statute faces due south down 16th Street toward the White House, which can actually be seen from Scott Circle, where the Australian and Philippine embassies reside. (Incidentally, all horse statues in the city must face toward the White House to avoid having their back sides pointed in that direction.)

Scott was 74 years old at the war’s start and too old to fight in the field, but he realized, contrary to popular opinion, that it would be a lengthy war and helped to design the overall strategy that allowed the Union forces to prevail. His Anaconda Plan relied on a blockade of the South and on Union presences in Northern Virginia and along the Mississippi River to apply economic pressure on the South. He died little more than a year after the Union victory in May 1866.

Other monuments in green spaces around the circle include a memorial to Dr. Samuel Hahnemann, a German physician who founded the homeopathic school of medicine, and a statue of Daniel Webster, a renowned senator, orator and opponent of slavery who nonetheless spearheaded many efforts in the first half of the 19th century to avoid a conflagration between the North and the South over the issue. 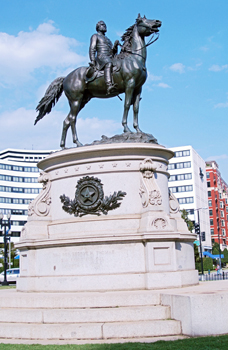 General George H. Thomas (1816-70)
Thomas Circle, at the junction of Massachusetts and Vermont Avenues, and 14th and M Streets, NW

An equestrian statue of Thomas sculpted by John Quincy Adams Ward and erected in 1879 stands in the center of the circle and faces due south. Born in the secessionist South, Thomas wedded a Northerner, opposed slavery, and threw his lot in with the Union, causing his Southern family to disown him.

He produced a long string of battlefield successes in Kentucky and Tennessee, including leadership of Union troops in defensive action at the Battle of Chickamauga in Tennessee that ultimately saved the Union Army at Cumberland from destruction in 1863 and gave him the nickname, “The Rock of Chickamauga.” The statue notes that it was erected by a grateful Army of the Cumberland. Thomas also won a decisive victory against Confederate Gen. John Bell Hood in Franklin and Nashville, Tennessee, in 1864.

At the outer edge of Embassy Row, the circle is largely urban, surrounded by office buildings and churches, including the prominent National City Christian Church.

David Tobenkin is a freelance writer and licensed D.C. tour guide who leads tours of Embassy Row. He can be reached at dtobenkin@yahoo.com.