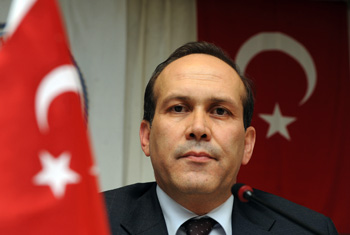 Turkey’s ambassador to the United States, Namik Tan, gives a speech on March 4 during the Armenian genocide vote in Washington. Armenia hailed the non-binding resolution by the House Foreign Affairs Committee to brand the killing of Armenians by Ottoman forces during World War I as “genocide,” calling it an important step forward for human rights. Turkey recalled its ambassador after the vote and has warned that ties will suffer.

A new House resolution labeling the mass killings of Armenians in Turkey during World War I as genocide is sparking a wider backlash than in previous years when Congress considered similar measures.

Armenian-Americans were delighted when the House Foreign Affairs Committee narrowly adopted the resolution on March 4, but they were equally dismayed when President Obama turned against the measure at the last minute and violated a campaign promise to the small, but political savvy, ethnic community — which is now striking back.

The issue of what happened to hundreds of thousands of Armenians during the collapse of the Ottoman Turkish Empire in 1915 has today morphed into a modern-day political battle — and a lobbying bonanza for both sides.

The congressional resolution is nonbinding but is fraught with emotion for Armenia, which views it as a moral obligation to condemn this tragic chapter of history, and for Turkey, which hardly appreciates being compared to the likes of Adolf Hitler by the U.S. government.

So why do U.S. lawmakers regularly step into this emotional minefield — about an event that took place nearly 100 years that has little connection to American history?

For one thing, House Foreign Affairs Committee Chairman Howard Berman (D-Calif.), as well as House Speaker Nancy Pelosi (D-Calif.), each represent relatively large American-Armenian constituencies. And for years, the Armenian lobby — largely in the form of the Armenian National Committee of America (ANCA) and Armenian Assembly of America (AAA) — have mounted a vigorous campaign to have the World War I-era slaughter of Armenians recognized as genocide.

The House resolution refers to U.S. government studies and historians who concluded that Turks murdered 1.5 million Armenians in an attempt to exterminate the ethnic group. Turkey argues those figures are inflated and that the deaths resulted from war and the chaotic demise of the Ottoman Empire, not a concerted campaign of genocide, and urges an independent historical review — not legislation — to examine the events.

In addition to being a matter of national honor, Turkey no doubt fears such resolutions could ultimately lead Armenians to seek reparations from Ankara. So in recent years, Turkey has launched its own lobbying push in Washington, throwing its diplomatic weight around as a key U.S. and NATO ally. Ankara has been warning the Obama administration of the damage to U.S.-Turkish relations should the resolution pass the House — also pointing out that the measure threatens an already-tenuous rapprochement between Turkey and Armenia after a century of hostility.

As another sign of diplomatic protest, Turkish Ambassador Nam&Mac245;k Tan, who had just arrived in Washington weeks earlier, was recalled to Ankara after the committee vote and is unlikely to return to Washington until Turkey is satisfied that the resolution will be killed.

Before his recall, Tan led efforts to stop the resolution in committee. He even appealed to Jewish organizations in Washington for help in opposing the resolution, according to the Turkish newspaper Hürriyet.

The Jewish Institute for National Security Affairs issued a report March 1 urging the defeat of the resolution before the committee vote, saying, “The Congress of the United States is not the place to debate the history of other people in other times.”

Tan also met with Committee Chairman Berman, the California Democrat who got the resolution through his panel on a 23-22 vote; while the Turkish Embassy engaged two powerful ex-congressmen — former House Speaker Dennis Hastert, Illinois Republican, and Richard Gephardt, a former House Democratic Majority Leader from Missouri — to persuade their former colleagues to oppose the resolution.

In addition to recalling its ambassador, Turkey denounced the committee’s action. “We condemn this … resolution, accusing the Turkish nation of a crime that it has not committed,” the Turkish government said. “Those who support this … resolution have adopted a wrong and unfair attitude with political motives, while ignoring the historical truths and differences of opinion among the expert historians on the subject.” 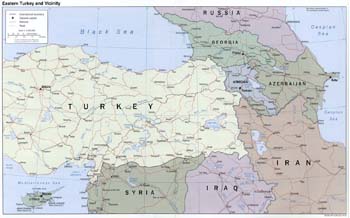 Yet many historians acknowledge that what took place constitutes genocide. A number of U.S. lawmakers agree, including at one point Hillary Clinton, who had faithfully embraced the Armenian genocide issue as a presidential candidate and as a senator from New York. But now as secretary of state, she is leading an administration push to stop the full House from considering the resolution.

Obama too called the killings genocide but hasn’t used that description as president. During the primary campaign in 2008, he said, “America deserves a leader who speaks truthfully about the Armenian genocide and responds forcefully to all genocides. I intend to be that president.” However, as president he referred to the killings of Armenians as “one of the greatest atrocities of the 20th century.”

Now all eyes will be on the annual White House statement to commemorate Armenian Remembrance Day on April 24 to see what Obama says this year, although Armenian-Americans hold little hope that he will employ the word “genocide” at this month’s commemoration given that he didn’t do so last year.

As in 2009, the administration finds itself in the difficult position of infuriating a crucial regional powerbroker, possibly losing Turkish cooperation on Afghanistan, Iraq, Iran and the Arab-Israeli peace process.

Former President George W. Bush faced the same dilemma in 2007, when a similar nonbinding resolution passed by a wider margin, although lobbying efforts by the Bush administration successfully stalled the resolution.

Indeed, Turkish and Armenian historical claims have clashed — and essentially gone nowhere — in many earlier congressional resolutions (also see “Turkey, Looking to Future, Battles Its Past With Armenia” in the July 2006 issue of The Washington Diplomat). However, it was the reaction of Obama and Clinton this time that dashed Armenian-Americans’ hopes for a change in U.S. policy. Many are now taking aim against Democrats in this year’s congressional elections.

“It is frustrating,” Aram S. Hamparian, executive director of the Washington office of the Armenian National Committee of America, told The Washington Diplomat.

The opposition from the president and the secretary of state “sends an incredibly negative message for Armenian-Americans,” he added.

Even before the Obama administration publicly opposed the House resolution, Armenian-Americans were already angered with the president for failing to use the word “genocide” when he issued a statement on Armenian Genocide Remembrance Day last April.

Many retaliated at their first opportunity. The large Armenian-American community in Massachusetts voted overwhelmingly for Republican Scott Brown in January and helped him win the U.S. Senate seat held by Democrat Edward M. Kennedy for 47 years.

“Armenian-Americans used their vote in that Senate race to send a message to the White House,” Hamparian said, noting that Brown won their support without even addressing Armenian issues in the campaign.

Democrats up for re-election in November may lose the traditional support they enjoyed from many Armenian-Americans, according to the Armenian National Committee Political Action Committee, which has endorsed Republican Congressman Mark Kirk, co-chairman of the House Armenian Caucus, in his race for Obama’s old Senate seat in Illinois.

“Fairly or unfairly, the anger and disappointment over the president’s abandoned promises have had — and will continue to make — a major impact on how voters respond to other Democratic candidates, even those who are supportive of Armenian issues,” the PAC said on its Web site.

Yet others say the issue takes an oversize role in U.S. politics that unnecessarily jeopardizes America’s relationship with a strategic partner.

Alon Ben-Meir, an international relations professor at the Center for Global Affairs at New York University, argues that the recent resolution has “less to do with the U.S. government’s pursuit of historical accuracy, than political theater that has come at a strikingly inopportune time.”

“Not only will this vote undermine the reconciliation process between Turkey and Armenia, but it threatens the U.S.-Turkish relationship at a time when Turkey is playing a critical role aiding the U.S. and the Middle East peace process,” Ben-Meir wrote in the opinion piece “Reassessing the Genocide Resolution.”

“Sadly, this resolution was politicized at the outset, thereby diminishing much of its moral tenet,” he adds. “Had the purpose been for the U.S. to champion human rights and officially condemn any large-scale atrocities in times of war, then why was there no debate about massacres in Sudan, Rwanda, Algeria or the Balkans?”

But Hamparian insists that the House resolution has facts and morality on its side and argued that Turkey is again “throwing a temper tantrum.”

He added though that the resolution is not intended to condemn the modern Turkish state but to set the record straight in the United States.

“When we do the right thing on an issue, it often has an impact on other countries,” he said. “We, as a nation, do make a difference in the world. When we stay silent on an issue, we send a very negative message.”