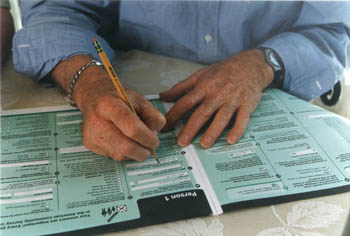 Every 10 years, the U.S. government conducts an official count of the country’s population (estimated at around 300 million), and this year, the U.S. Census Bureau has focused much of its work on reaching people designated as “hard to count” — including racial and ethnic minorities, immigrants and the poor.

With the U.S. Census in full swing this month, the government is determined to get an accurate count of the American population — and that means reaching segments that are considered “hard to count,” a good portion of which falls under the category of foreign-born immigrants.

For months, the U.S. Census Bureau has been targeting these people and campaigning to promote the importance of Census 2010. Every 10 years, the U.S. government conducts an official count of the country’s population (estimated at around 300 million) to determine how more than 0 billion in federal funds gets distributed for highways, schools and health facilities, as well as for determining the apportionment of congressional districts.

This massive head count, which is mandated by the U.S. Constitution, helps officials get a handle on basic changes to the number and geographic distribution of U.S. residents — both citizens and non-citizens.

The bureau has focused much of its work on the people designated as “hard to count — including racial and ethnic minorities, immigrants and the poor — and has been making extra efforts to get people who fall into these categories counted.

There are many theories as to why people sometimes hesitate to cooperate, or be counted. For one, many simply mistakenly believe the census only for American citizens. Others view the questionnaire as a time-consuming task or as too invasive and personal. Others do not trust what the government will do with the data or fear it will be used against them (especially immigrants). Others face a language barrier, and some people have the added confusion of temporary living arrangements and how that gets factored into the simple questions — in other words, some questions are not that simple to answer for some.

Also, as a result of the recent real estate and economic downturn, counting people has become more complicated with the wave of home foreclosures and families doubling up on their housing arrangements.

Rounding Up Diplomats The diplomatic community is certainly a special population niche — and many visiting foreigners assume that because they’re not residing here permanently, they should not be counted, an assumption the Census Bureau is trying to debunk.

“The diplomatic community is a very unique community. Some think, ‘I’m only here temporarily, so why do I need to be counted?’— but they forget about the resources they utilize, and that’s why it’s vitally important that they fill out the survey,” said Sylvia Ballinger, 2010 Census media specialist for the Census Bureau at the Department of Commerce.

“We have partnership specialists who have been working extensively to conduct outreach initiatives and events with various embassies in the area,” added Ballinger.

“These embassies have had tables at their consulates, have sent message flyers in various language to their people to remind them that they utilize a number of services in the area — like roads, schools, etc.” she explained. “This country is responsible for their safety while they live here, so we have to get an accurate count of their populations so the resources can be put back into their community.”

Ballinger said that in the end, the census benefits everyone — even temporary U.S. residents. “It’s about power, and it’s about money.”

Consequential Count Using census numbers, almost 0 billion in federal funds are allocated for services like public hospitals, job training centers, schools, senior centers, public works projects and emergency services. The data also helps to determine the number of seats each state has in the U.S. House of Representatives, and assists in drawing up voting district lines. 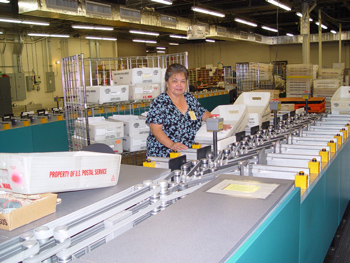 Census surveys are processed by the National Processing Center. The results determine how more than $400 billion in federal funds gets distributed for highways, schools and health facilities and other vital public services.

According to the Immigration Policy Center at the American Immigration Council, the bulk of federal funds goes to about 10 federal programs, including Medicaid, unemployment insurance, highway planning and construction, nutritional and other temporary assistance for needy families, among other areas. In a nutshell, it’s money no one can do without, and everyone uses — whether or not they realize it.

Last month, U.S. residents around the country, including Puerto Rico, received questionnaires from the Census Bureau asking 10 simple questions about the residents living in each American home.

Questions involve age, sex, number of people living at an address, how people within the home are related, and ethnic origin. People who are not living at the property should not be included in the answers (e.g. college students, deployed military personnel, nursing home residents, prison inmates, etc.). The survey arrives in English to most addresses. Areas with high concentrations of Spanish-speaking residents may receive a bilingual form.

U.S. residents are required by law to complete the questionnaire and send it back using the provided postage-paid envelope. If a response is not sent in, residents can expect to see a census worker appear on their doorstep, prepared to conduct a count in person. And odds are, the official will be multilingual — not only in common languages like Spanish or Mandarin, but others such as Punjabi, Tagalog, Bengali and Urdu.

In fact, 10 years ago, the Census Bureau advertised in 16 foreign languages. This year, that number has grown to 27 — all part of a coordinated campaign to penetrate the ever-growing immigrant community by partnering with various minority groups, houses of worship and businesses.

National Pride, and Power Local immigrants are also urging members of their Diaspora to participate in the census to boost their community’s civic voice — and influence. For instance, Gunay Evinch, an American-born Turk and president of the Assembly of Turkish American Associations (ATAA), recently formed a partnership with the Census Bureau to spearhead a national campaign to count people of Turkish and Turkic heritage throughout the United States.

“Every Turk should stand up and be counted because the future of our children is counting on us,” said Evinch. “As far back as the 1970 Census, I remember my family at the kitchen table, and my father would proudly write ‘Turk’ in the ‘other’ box on the census form.”

Evinch is the brainchild behind “Census 2010 SayTurk” — which has a double meaning. “‘Say’ in Turkish means ‘to count,’” Evinch explained. “And it also means ‘to respect,’ so we are saying, ‘Count yourself, respect yourself.’” His organization is encouraging people of Turkish origin to write in ‘Turk’ on question nine of the 10-question census survey to identify the estimated 500,000 Turks now living in the United States.

“By 2011, we will be able to see how many Turks are in this country, where they live, who they are,” said Evinch. “This will help us be a more effective heritage community.”

He added: “Knowing where we are concentrated helps us determine things like knowing where to run for public office, for example.”

ATAA’s public service announcement campaign is now being aired on 10 Turkish television channels in the United States, plus all the major Turkish Web sites and newspapers. Overall reaction has been very positive, according to Evinch. “It’s an opportunity to be engaged in a very important American duty,” he said. “It’s as important as voting.”

Misconceptions About Participation All personal data provided in the census is kept private and protected under federal law. But many immigrants worry the information will go straight to immigration officials in an attempt to kick them out of the country. Others fear the information will be used to discriminate against them, for racial or religious reasons.

In fact though, there are no questions about religion in the census, which is a message Hazami Barmada, president of the American Muslim Interactive Network (AMIN), is delivering to her community.

Last month, AMIN organized a symposium called “United States Census 2010: Muslim Voices Matter.” A panel of speakers discussed how faith-based organizations actually benefit from census numbers because some federal funds are funneled to religious organizations’ activities and facilities in the form of federal grants. The panel also addressed community concern and hesitation to participate in what can be perceived as an intrusion on privacy.

“I think it’s important to familiarize the community with the census,” said Barmada, “to make clear that the survey doesn’t actually ask about religion. There are a lot of misconceptions that it does ask for religion, and there is a legitimate fear in our community due to racial profiling, which is something that is actually going on.”

Barmada — a Syrian-Palestinian who moved from Syria with her family in the early 1990s — approached the Census Bureau about holding the symposium. “When you’re doing a Muslim event, you’re targeting a much larger community — not just Arab. We had groups represented that would be hard to reach, ordinarily, in one event.”

Barmada also feels the program was necessary because Muslims should understand that they are a vital part of American society. “When I am asked the question, ‘Why does the census matter to Muslims,’ my response is, ‘Why does it not matter,’” she said. “If we are not counted, then people don’t know we’re here, and so as a community we cannot have a voice. We are an active part of the American community and we deserve to be heard.”

To that end, in February, the Arab American Institute (AAI) launched a campaign to promote the census among Arab Americans. In a series of print advertisements and television and radio spots in Arabic and English, the organization tapped Arab American leaders in the country to spread the message about the census to tens of thousands of Arab Americans countrywide.

AAI Executive Director Helen Samhan also testified at a U.S. House hearing to explore ways to penetrate this hard-to-reach population, addressing the issue of Arab American perception about the census.

“Among the Arab population, there are concerns because of their experience with racial profiling since 9/11,” said Samhan, a third-generation American of Syrian and Lebanese descent. “We are trying to convey that all personal information is not shared with law enforcement agencies or with anyone,” she added. “We are doing our best to encourage participation and to explain what is done — and what is not done — with the information gathered.”

Likewise, the Asian American Justice Center (AAJC) is also encouraging Asian Americans to get counted. Terry Ao, director of census and voting programs, said the organization has created a special Web site — www.FillInOurFuture.org — for Asian census campaign organizers from around the country to use in promoting participation.

“It houses a lot of information about the census,” said Ao. “It’s a clearing house of census materials developed by us for people to use in conducting their own campaigns.”

The site’s resources include video and print public service announcements and ads in 24 Asian and Pacific Islander languages. “We wanted to make sure they could use these resources and not duplicate efforts.”

Ao said that in Census Bureau focus groups, Asian Americans also expressed hesitation about participating. “There is a lack of awareness,” said the American-born Ao, who is of Chinese heritage. “It’s a fear about where does that information go, and what harm may come to people,” she said. “Many people think of the government as one monolithic entity, where everything flows between the different agencies, but we are here to say that that’s not the case.”

Ao pointed out that the penalty for breaching census confidentiality is up to five years in prison and 0,000 in fines. “We are helping folks understand the benefits [of the census] to them, their family and their community, and explaining the protections afforded by this country.”