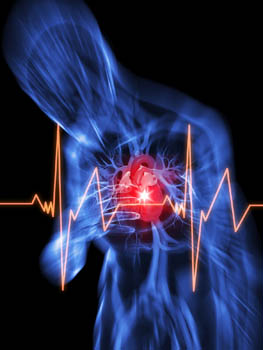 On Feb. 11, former President Bill Clinton was hospitalized in New York with chest pains. Within 90 minutes of walking into NewYork-Presbyterian Hospital, the peripatetic ex-president had two new stents in his heart, less than six years after undergoing quadruple bypass surgery. One of the bypass channels created by that surgery was found to be totally blocked.

The former president is far from alone as a “repeat offender.” Patients who’ve had significant “cardiac events,” such as a heart attack, bypass surgery or the placement of stents, are far more likely to find themselves in the hospital again within a few months or years for another such problem. A study published in the New England Journal of Medicine in 2007 found that 40 percent of heart attack patients released from a Michigan hospital had several remaining unstable plaques in the vessels of their hearts, putting them at substantial risk of a repeat heart attack, a need for bypass surgery, or a need for repeat angioplasty.

When a heart patient returns in the throes of another incident — whether it’s a former president or a local first-grade teacher — how do doctors manage their care? Broadly speaking, there’s not much difference, says Dr. Allen Solomon, a professor of medicine and director of the Coronary Care Unit at George Washington University Hospital.

“In anybody with vascular disease in general, the same kind of goals are present. They need to avoid smoking, eat a healthy diet, achieve their ideal body weight, exercise on a regular basis, and control their blood pressure, cholesterol and blood sugars,” Solomon said. “Those are general good health prescriptions in anybody with cardiovascular disease.”

The question doctors need to answer when someone returns with further cardiac symptoms is, “Why?” Patients come back in with second heart attacks or a need for a second bypass operation for different reasons. Some may still be smoking or eating poorly — in that case, it’s their lifestyle that needs to change. In others, their blood pressure or cholesterol may not have been well controlled by medication. “In that case, we need to work with them on taking their medications regularly, and if they can’t afford them, help them get assistance,” said Solomon.

There could also be “technical” issues involved. For example, when a patient comes in with a major heart attack, and has a complete blockage in one of the three major coronary arteries and moderate blockages in the other two — not an uncommon occurrence — that patient might have the complete blockage opened up with a stent while the other two are left alone for the moment. “It’s controversial whether you should address three blockages at the same time, fix the two incomplete blockages a few weeks later, or just as commonly, fix the important one and then be really aggressive with lifestyle and medications to address the other two,” Solomon said.

But if that’s the approach the doctor takes, the patient is still at risk for future problems, because they have blockages in two other arteries as well.

Something similar can happen after bypass surgery. “The surgeons may have bypassed the major vessels, but the smaller ones that aren’t bypassed still can put people at risk for having symptoms down the road,” Solomon explained.

People who show up at the doctor’s office or the hospital in the throes of a heart attack, or in need of bypass surgery, usually don’t have a single blockage in a single artery. “Atherosclerosis is a process that probably begins in the very early adult years and gradually gets worse over decades,” Solomon said. “Once you address that acute problem, there is still underlying atherosclerosis.”

He points out that although lifestyle changes and drugs to lower cholesterol and blood pressure may be effective and important, they cannot completely melt away plaques in the heart. “Usually, they just slow down the progression,” he says. But even that can make a big difference.

“If you do the right things after a heart attack — eat healthy, lose 20 pounds, exercise, get serious about your meds — your chance of a repeat heart attack within the next couple of years is less than 5 percent,” Solomon noted. “But if you don’t do those things, it’s almost guaranteed that you’ll have another attack sooner rather than later. For people who’ve had stents, it’s true that about 10 percent to 20 percent will have restenosis [reoccurrence of stenosis, a narrowing of a blood vessel] over the next year or two, and will need to come in for another stent procedure. But they’re unlikely to have another heart attack.”

Your chance of a repeat event also depends on how the doctors fixed you. “If they do a bypass, they try to bypass all blockages and you’ll be more likely to stay out of the hospital for a long time,” said Solomon. “But you have a much longer hospitalization and more morbidity with the procedure. A stent is much easier — you’re home in 24 hours and can return to work in a day or so, but there’s a higher chance of a new blockage in that stent and needing another procedure in the next year. But many people would say, given the choice between 24 hours in the hospital and going back to work in a couple of days, versus a week in the hospital and a six-month recovery period with bypass, they’ll take their chances of having to come back in to have a stent reopened.”

The key for all cardiac patients, Solomon stresses, is to focus their efforts on reversing the things they know they can reverse. “Controlling blood pressure, cholesterol and diabetes; stopping smoking; and a healthy diet and exercise are the key.”