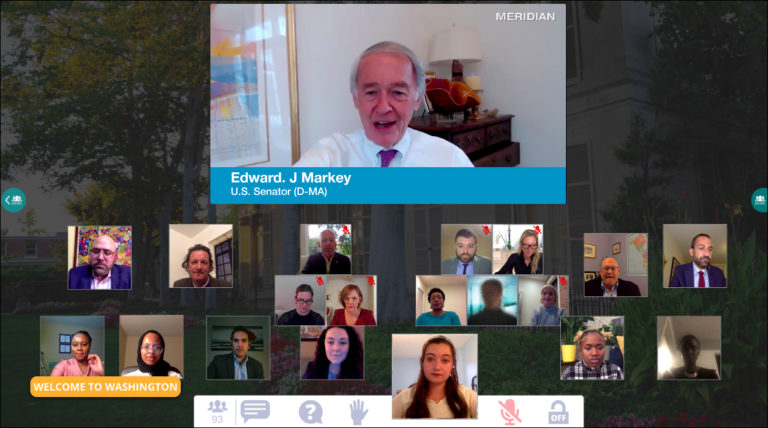 In the midst of political chaos in the nation’s capital—and with coronavirus death tolls across the United States now exceeding 4,000 a day, the Meridian International Center welcomed 15 newly credentialed foreign ambassadors to Washington, D.C.

The Jan. 13 virtual event took place barely a week after violent mobs stormed the Capitol as lawmakers attempted to certify the Nov. 3 election; the same day the U.S. House of Representatives made history by voting to impeach President Trump for a second time; and exactly one week before Joe Biden’s Jan. 20 inauguration as the 46th president.

In a livestreamed address, Sen. Edward J. Markey (D-Massachusetts), thanked the new ambassadors for their service at such a difficult, uncertain moment in history. Since the start of the pandemic just over a year ago in Wuhan, China, COVID-19 has infected 96 million people and killed more than two million, with the highest death tolls in the United States, Brazil, India, Mexico, Britain, Italy and France.

“It is clearer now than ever before how necessary it is to work together on challenges that know no boundaries—from climate change to nuclear nonproliferation to human rights, and of course, combating pandemics,” said Markey, a member of the Senate Foreign Relations Committee as well as Senate author of the Green New Deal.

“This past year has shown us that we can’t try to go it alone, for we are all passengers together on this pale blue dot, as Carl Sagan said. We must work together to combat the COVID-19 pandemic to ensure that the vaccine is distributed fairly across the globe, and that the health and economic crisis caused by this devastating disease do not disproportionally impact lower-income countries,” Markey declared.

An outspoken critic of climate-change denial, the progressive lawmaker added: “We must tackle the existential crisis of our time, the climate crisis, and commit to making our planet healthy and livable for future generations—and we must encourage all countries to uphold their obligations to protect the universals values and human rights of their people.”

Meridian is a nonprofit, nonpartisan center founded in 1960; its slogan is “Stronger at home when globally engaged.” As part of Meridian’s virtual program, many of the newly arrived ambassadors introduced themselves on camera and briefly outlined their priorities for 2021—especially as mass vaccination campaigns get underway in the U.S. and around the world.

Hilda Sukha Mafudze, who now represents the African Union in Washington, said her main goal would be to “expand levels of engagement” between the U.S. and her 54-member organization, particularly with the AU’s Centres for Disease Control and Prevention. Similar sentiments were expressed by other African diplomats.

“I’ve been in government for 15 years, and tourism is one of the cornerstones of our economy,” said Botswana’s new ambassador, Onkokame Kitso Mokaila. “So after the vaccine rollout, our greatest wish is to open up the economy, have flights come to Botswana, and get our people employed.”

The new British envoy, Karen Elizabeth Pierce, first served in Washington in the 1990s; this tour of duty represents her fourth posting in the United States. Pierce said she hopes to “get around all 50 states, meet the American people and find ways to cooperate together.”

Uruguay’s Andrés Durán, who lived and studied here 20 years ago, said: “I’m looking forward to giving my parents and other family members and friends lots of hugs, to have real meetings and gatherings, and to recover that human connection we lost during this pandemic.”

Added Australia’s Arthur Sinodinos, marking his first tour of duty as an ambassador: “The thing I’m really looking forward to is being able to catch up with so many of my colleagues in person. I want to hug people, pat people on the back and get on with normal life.”

In addition, Japan has named Koji Tomita as its new ambassador to the United States, effective Dec. 25. He succeeds Shinsuke Sugiyama, who assumed the post in January 2018.

Tomita, 63, was previously the Japanese envoy to South Korea. According to the Japan Times, he is known to have ties with people close to Biden. Tomita previously served as minister at the Japanese Embassy in Washington and also headed the Foreign Ministry’s North American Affairs Bureau, working with the Obama administration when Biden was vice president.