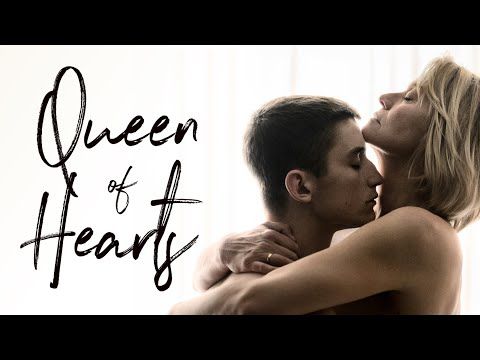 A Danish woman jeopardizes both her career and her family when she seduces her teenage stepson. A single mother in Iceland befriends an African lesbian asylum seeker from Guinea-Bissau. A Norwegian dancer is diagnosed with brain cancer and given three months to live.

If these story plots sound intriguing, you’ll love Nordic Women in Film 2021—an upcoming online event co-sponsored by the embassies of Denmark, Finland, Iceland, Norway and Sweden along with Women in Film and Television International.

The event, a five-week celebration of Scandinavian artistic ambition and cultural exchange, will allow audiences across the United States to watch five contemporary films, followed by intimate panel discussions with groundbreaking female Nordic and American filmmakers. 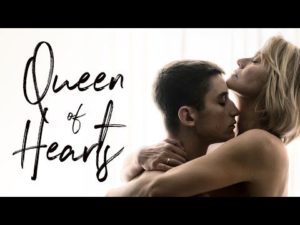 Next in the lineup is Queen of Hearts, directed by Danish-Egyptian filmmaker May el-Toukhy. Scheduled for screening Feb. 9-11, this 127-minute movie, starring Trine Dyrholm as an unlikely sexual predator, won the 2019 Nordic Council Film Prize and earned a score of 97% from the Rotten Tomatoes rating site.

The third film in the series is emotionally riveting Hope (Feb. 16-18). Andrea Braein Hovig plays its protagonist Anja, a dance choreographer diagnosed with an inoperable brain tumor. Stellan Skarsgard plays her longtime partner, Tomas. The film, which garnered a 100% rating from Rotten Tomatoes, is based on the real-life experience of its Norwegian writer-director, Maria Sødahl. 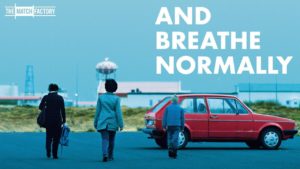 Sweden’s Lucky One, directed by Mia Engberg (Feb. 23-25), got mixed reviews. Its plot, in one sentence: “Vincent is working long nights in the Paris underworld. He has long since stopped dreaming of another life, but when he unexpectedly has to take care of his teenage daughter, Adina, his world starts to change.”

The series concludes with Iceland’s And Breathe Normally (March 2-4), directed by Ísold Uggadóttir. The story of an unlikely bond between a rookie immigration official struggling to provide for her son and an asylum-seeking refugee on her way to Canada, this movie “engages the audience with a deeply resonant narrative that highlights the ways our sense of safekeeping can suddenly be ripped from our grasp,” according to New York Times film critic Candice Frederick.

Mikko Hautala, Finland’s ambassador to the United States, said Nordic Women in Film 2021 is an example of the “excellent cooperation” that exists among its five participating nations.

“The Nordic countries have a long history of promoting gender equality, spearheading initiatives to support inclusion and highlighting women’s stories,” the ambassador said in an email. “We work to build a world where women and girls of all abilities and ages can fully enjoy their rights. Therefore, it’s no surprise that the rights of women and girls is the cross-cutting theme of Finland’s campaign to be elected to the UN Human Rights Council.”

Hautala also said he’s thrilled about the panel discussions that follow each screening.

“Radiant U.S. and Nordic female filmmakers will discuss topics ranging from living and creating freely to women making our blood boil—and from borderless filmmaking to women who define their own reality,” he said.

For more information on Nordic Women in Film 2021, please contact Alexandra Bro at the Embassy of Sweden. She can be reached at (202) 256-0435 or alexandra.bro@gov.se.

Alex Azar gets a medal

On Jan. 7, the Embassy of Lebanon awarded Alex Azar with the country’s National Order of the Cedar—the country’s highest honor—for his “lifetime achievements in public service.”

Azar, 53, received the award from Lebanese Ambassador Gabriel Issa. Due to COVID-19 restrictions, only the families of Azar and the ambassador, as well as a few embassy staffers and HHS officials, were allowed to attend. 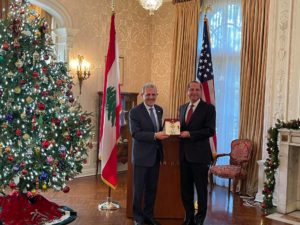 The Yale-trained lawyer served briefly as the first chairman of the White House Coronavirus Task Force before his replacement by Vice President Mike Pence a month later. From 2012 to 2017, Azar was president of the U.S. division of leading drugmaker Eli Lilly & Co. He was also a member of the board of directors at the Biotechnology Innovation Organization, a 1,100-member pharmaceutical trade association.

In his speech, Azar said HHS “benefits greatly from the talents of the Lebanese people which include alumni of the American University of Beirut now holding top positions at the Food and Drug Administration as well as the Centers for Disease Control and Prevention.

He also referenced the success of Moderna in developing a COVID-19 vaccine, and noting that Moderna’s founding chairman, Noubar Afeyan, is a Lebanese immigrant to the United States.

Azar “thanked the Lebanese community in the U.S. for its outpouring of support and friendships throughout the years,” and also said he’s proud that Washington stood by the people of Lebanon in the aftermath of the 2020 Beirut port explosion. He said that last year alone, the U.S. government provided $359 million in humanitarian assistance for Lebanon, including $55 million in COVID-19 response and $38 million in food, medical supplies and other emergency support. 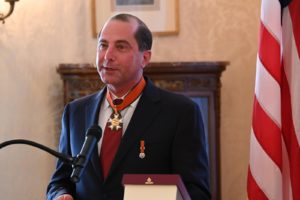 Following the explosion, he said, HHS sent experts as part of a “dark team” to assess Beirut’s healthcare infrastructure and find out what hospitals needed to get back on their feet.

Interestingly, Azar isn’t the first U.S. cabinet official of Lebanese origin to win the award. Spencer Abraham, the U.S. secretary of energy serving under President George W. Bush and a U.S. senator from Michigan before that, got it in 2004 from then-ambassador Farid Abboud.

More than 90 others have received the award since its establishment in 1936, including world-famous Lebanese singer Fairuz (1957 and again in 1963); former Lebanese Prime Minister Rafik Hariri (1996), who was assassinated in 2005 by a suicide truck bomber in Beirut; Syrian President Bashar al-Assad (2010); and Lebanese Druze politician Walid Jumblatt (2014).