“How do you eat a whale?” Leslie Sargent, a school counselor at D.C.’s Woodrow Wilson High School, asks students who are starting the college application process. That usually gets a lot of blank stares or looks of concern for her sanity, but when she answers herself — “You do it one bite at a time” — the teenagers get it. How do you finish a college application? A little bit at a time.

The college application process has never been easy, but it’s grown more complex in recent years as colleges and universities have shifted to looking holistically at applicants, rather than just at raw data. This means admissions officers are looking not only at test scores, transcripts and grade point averages, but also extracurricular involvement and the content of essays. 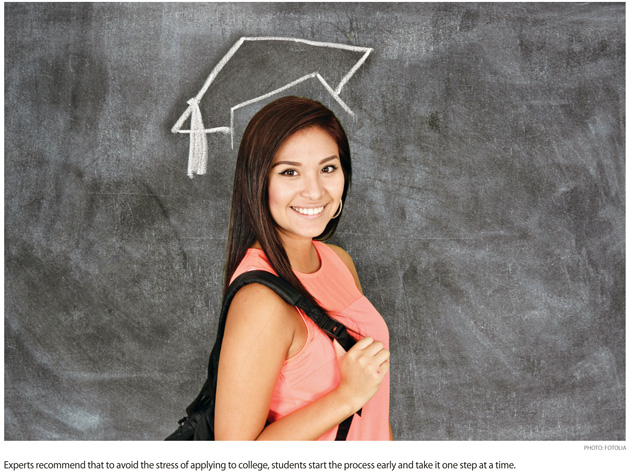 The number-one way not to get overwhelmed by the task at hand is to start early, experts say. The process begins in your freshman year, said Patrice Arrington, college and career coordinator at Wilson. That’s when grades and class rigor, or level of difficulty (i.e., Advanced Placement classes or International Baccalaureate programs versus standard curricula) begin to be important. During your sophomore year, Arrington recommends visits to colleges to get a sense of what you like or dislike about particular environments. For instance, do you prefer big or small schools, diverse student bodies or a given program of study?

Additionally, “we’re asking students even in their sophomore year to get involved,” said Arrington, who brings representatives from about 140 colleges and universities to Wilson each year. “Find a couple of clubs — we don’t need you to be involved in everything — that you’re passionate about and that you’re really going to dedicate your time to.” This will help with that holistic review, she said.

In the 11th grade comes prepping for standardized exams such as the SAT, ACT and subject-matter tests. By senior year, often the toughest in terms of workload and rigor, students should be assuming leadership positions in their extracurricular activities to further boost their resumes.

Standing Out from the Crowd

Because applications involve more moving parts, students need to make themselves stand out. One way to do that early on is by getting on schools’ radar by requesting information online, visiting campuses or meeting with admissions representatives, said Andrew Belasco, chief executive officer of College Transitions, which has locations in six states and offers remote services.

“If there is no contact made, a college may treat you as something called a stealth applicant, and typically regardless of that student’s grades or test scores, if there was no prior contact with the university, the university is much less likely to admit the student because they think they’re less likely to attend if admitted,” Belasco said. And yield rates — or the percentage of accepted students who opt to attend the school — are important to colleges’ and universities’ ranking and revenue.

When students are ready to start submitting applications, they must first decide where to send them. To help students narrow down their options — there are about 5,000 colleges and universities in the United States — Arrington starts by looking at rigor, the transcript, the GPA and test scores to determine target, reach and safety schools. Target schools are places where students have a reasonable shot at acceptance; reach schools are ones that are unlikely but not outside the realm of possibility; and safety schools are those that would easily accept the applicant.

Arrington also takes into consideration the kind of school a student wants, the location, their planned major and any financial concerns.

“The ideal goal is to make sure that they’re comfortable, make sure they’re academically successful and just in a really great situation,” she said.

It’s best to narrow down your choices to eight to 12 schools with one caveat: “You need to want to go to those schools,” said Diana Blitz, also a school counselor at Wilson. “Every school in a relative way is looking at your transcript and how you challenged yourself. From there, it is test scores,” although some universities are starting to put less emphasis on those.

One of those schools is the George Washington University (GWU) here in D.C. In 2015, officials decided not to require test scores from most applicants for the 2016-17 school year. As a result, the percentage of first-year students from underrepresented minority groups increased by 33 percent in fall 2016. In total, about 15 percent of the student body comes from abroad and represents 100 countries.

“There’s a lot of anxiety associated with this idea that this one test determines where you go to school or how much merit money or scholarship money you might potentially receive,” said Costas Solomou, GWU’s dean of admissions. “We felt there was an opportunity for us to think more holistically in terms of how we evaluate students and what we’re looking for in students.”

No one part of the application emerges as the most important now, Solomou added. “That’s the fantastic thing about a holistic review,” he said. “It’s not just about what you accomplish in the classroom, but it’s everything about you as an individual.”

GWU’s admissions counselors are assigned to regions of the United States and abroad and work with high schools, counselors, parents and children. They might get to know students over several years before ever reading their applications.

“We’re looking for students who are leaders,” Solomou said. “Think about who we are. We are the most politically active institution. We attract really passionate students that are advocating for what is important to them.” 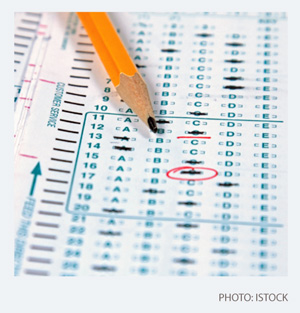 Choosing an institution of higher education is stressful. Add to it all the moving parts of the application process, and the process can become nightmarish. A common mistake students make is procrastinating so that they’re either racing to submit materials on time or they miss application deadlines entirely.

“That is the absolute kiss of death,” Blitz said. “Colleges have plenty of applicants and now with electronic submission, you can’t really blame the U.S. mail, so we tell kids from the beginning, ‘Deadlines are deadlines.’”

Anxiety over acceptance to a particular school is a frequent cause of procrastination, Sargent added. “Some kids are really, really eager to get started and get going and they get frustrated that the rest of us aren’t working as fast as they are, but more kids tend to procrastinate because they’re worried about what might happen — that they might do all the work for an application and not get accepted,” she said. “You don’t know unless you submit an application and try.”

Waiting until the last minute to apply has a ripple effect that students might not fully appreciate. Counselors like Blitz and Sargent and teachers write recommendation letters and without enough lead time, those letters might not be as good as they could be, Blitz said. “Their emergency becomes our emergency,” she said.

Another problem, she said, is getting stars out of the eyes of applicants and parents. “It’s challenging at Wilson and at any high school still to get kids and parents to think outside of the schools you hear about in the movies or on TV shows and know there are so many, many good-fit schools for our kids,” Blitz said. “That’s a roadblock that we try to get past.”

To reduce stress — and teach time management skills — Arrington says students should make a calendar of due dates for essays, applications, tests and other application-related events. Parents could also set aside time each week to review where their children are in the application process and whether they need help. But that help has limits. For instance, Wilson offers essay-writing workshops for seniors once a week after school because “we don’t always recommend that parents read it,” Arrington said. “Find some other adult to read your essay, because parents can be like, ‘Oh baby, that sounds good,’ and not be the best critique of that particular essay.”

Additionally, parents should understand that what schools look for today might be different from what they wanted when they went to college. “What they used to look for was more of a renaissance man — a student that was good at everything,” Ganjian said. Now, “when these applications just look like a mishmash of random stuff, that will end up hurting the students.”

That’s because colleges care more about their overall class profiles. They’re looking for students who shine in one particular area, such as athletics, music or engineering. “The combined force of all these kids is a really impressive class as a whole rather than a bunch of people who do a lot of things but maybe don’t excel at any one of them,” she said.

Ultimately, students are in control of their college decisions and should take advantage of the tools available to them to improve grades, get involved, test well and produce outstanding applications. That sense of control is the best way to combat stress. Blitz said.

“We really want our students from the time they’re freshmen to really just focus on being great kids and doing well in school and working toward testing well, which is through preparation and just focusing on the things they can control,” she said.

At Woodrow Wilson High School in Washington, D.C., counselor Diana Blitz is working with an ambassador’s son who has schools in Belgium and Germany on his target list, although his dream is to attend a university in Boston.

“He recognizes that in the United States, he’s not going to get federal aid, but his scores are high so he may get merit money from schools who want him there,” Blitz said.

Money is only one issue that international students applying to U.S. schools need to think about. “A lot of times, college admissions officers at U.S. universities aren’t very familiar with the curriculum of some of these high schools abroad,” said Andrew Belasco, chief executive officer of College Transitions, where about 30 percent of the clientele consists of international students. “Students could apply and have great grades, but there could still be some concerns about what those grades really mean.”

That’s where test scores — Advanced Placement, SAT and ACT — become really important, he added. They provide data to put everyone on a level playing field. Additionally, U.S. schools such as the George Washington University require international applicants to submit scores on English proficiency exams such as the TOEFL.

As far as abilities, though, “we are looking for the same qualities in our international students” as domestic ones, said Costas Solomou, GWU’s dean of admissions.

Students studying in the United States who want to attend schools abroad need to consider that the process is often more streamlined in other countries, said Colleen Paparella Ganjian, independent education consultant at DC College Counseling. For example, the United Kingdom has a single system through which students apply.

Additionally, “In schools abroad, it’s really not holistic and much of it is really, really just about numbers,” she said.