Home More News At 90, Haiti’s Ray Joseph reflects on a full life of politics and diplomacy

BROOKLYN, N.Y. — Raymond Alcide Joseph was supposed to be a preacher, a man of God. Instead, he became a political dissident with a price on his head, and later in life a diplomat.

In the days and weeks following the 2010 earthquake that ravaged his country, Joseph—then Haiti’s ambassador to the United States—was a familiar face on CNN. And now, as the Caribbean nation descends further into a nightmare of natural disasters, political assassinations, kidnappings and lawlessness, this elder statesman cannot and will not remain silent.

Joseph, who turned 90 on Aug. 31, could easily pass for a man in his seventies. A New York resident ever since he stepped down as ambassador in 2010, Joseph celebrated the recent milestone virtually—with 38 of his friends—on a Zoom call organized by his wife, Lola Poisson.

“People ask me why I don’t look my age. I tell them, it’s because I started very early in life with purpose. Treating everybody equally, with respect, has made me friends all the time, and I’m always happy,” he said.

It also helps that Joseph has never smoked, eats lots of fruits and vegetables, lives very simply and only consumes alcohol on rare occasions. “I had my first drink—vodka and orange juice—when I was 33, in Washington, and I nursed it all night,” he said with a smile. “That’s basically how I’ve lived my life.”

The former ambassador and his wife have been together for 37 years. They recently invited this visiting reporter to their modest sixth-floor apartment off Brooklyn’s Nostrand Avenue for a typical Haitian lunch of pwason gwo sel (salted fresh fish and onion), diri djondjon (rice with Haitian mushrooms), and a side dish of cabbage, carrots, militon and yams.

“When I met Ray, it was love at first sight,” said Lola, an accomplished artist with a master’s degree in public administration from New York University. “It was a meeting at a congressman’s office in Brooklyn. After the meeting, we exchanged information, but it was six months before I let him come inside my house.”

From preacher to politician

Raised as a Protestant in a deeply religious family, Joseph left Haiti in 1954 to study biblical languages at the Moody Bible Institute of Chicago; while there, he translated the entire New Testament into Creole, the language spoken by all Haitians. He later earned a master’s degree in social anthropology from the University of Chicago. The young man returned to Haiti in 1959, two years after President François “Papa Doc” Duvalier came to power.

In 1964, Papa Doc declared himself president-for-life. That same year, on Nov. 12, dissidents Marcel Numa and Louis Drouin were convicted of plotting to overthrow Duvalier and were executed.

“That was the day that changed my life. I dropped everything that had to do with intellectual development and got into politics full-time,” said Joseph, who by then had fled to New York. “I began in 1965 with my radio broadcasts against Duvalier. I saw the New York Haitian community was leaderless and started to organize the opposition.

At the age of 40, Joseph was hired as a reporter for the Wall Street Journal, and in 1971, he and his brother Leopold launched the first weekly newspaper, Haïti Observateur, for Haitians abroad from a living room on Manhattan’s Upper West Side. Earlier this year, on July 23, Joseph celebrated the paper’s 50th anniversary, which continues to be printed every week.

“We had offices in Montreal, Paris and other cities, but we could not be in Haiti because of the dictatorship,” he said, adding that in 1968, he had been condemned to death in absentia. “They tried to get me even here. During those years, I never thought about being president of Haiti. The highest post I got was secretary general of the organizations I ran. And I traveled the world with a document from the Department of Justice because I never had US citizenship.”

But in 1991, Ertha Pascal-Trouillot, Haiti’s first female president, asked Joseph to run the embassy in Washington after she had organized the country’s first truly free elections on Dec. 16, 1990. Jean-Bertrand Aristide, a populist priest and charismatic advocate of liberation theology, easily won with 67% of the vote.

Joseph said his biggest accomplishment as ambassador was winning Congressional passage of the Haiti HOPE (Hemispheric Opportunity through Partnership Encouragement) Act in 2006. The law, which took effect March 19, 2007, granted Haiti preferential US market access for apparel and textiles. It was later expanded to include luggage, headgear and sleepwear.

Then, on Jan. 12, 2010, disaster struck in the form of a catastrophic magnitude-7.0 earthquake that destroyed Port-au-Prince, leaving even the presidential palace in ruins. Estimates of the death toll vary widely, from fewer than 200,000 to more than 300,000.

Yet not a peep was heard from the president, René Préval.

“For three days, no one in Haiti was speaking to the world about what was going on. I was the face of Haiti,” Joseph recalled. “The third day after the earthquake, Préval finally came out and said, ‘my palace is collapsed.’ That got people enraged—and that’s when I thought, ‘I should run for president.’”

Joseph formally announced his candidacy for the Nov. 28, 2010, election in an interview earlier that year with the Christian Science Monitor, saying he would campaign alongside his famous nephew, singer Wyclef Jean. He then resigned as ambassador on Aug. 31, his 79th birthday.

“I knew that he would be turned down because of residency issues, and that they could not disqualify me on residence. So if I ran for president with Wyclef’s support, and with the support of the Protestant Church in Haiti behind me, we would win,” he said. “But then they disqualified me anyway, saying I had not been discharged properly from my position as ambassador and hadn’t gotten an approval from the Foreign Ministry.”

One thing is clear: After the quake, international donors led by former President Bill Clinton, co-chair of the Clinton Bush Haiti Fund, pledged $13.3 billion in assistance through the United Nations. Yet to this day Joseph says no one’s sure how much money was actually disbursed.

“The Red Cross donated $500 million and they built six little houses,” he said. “The former prime minister under Michel Martelly, Laurent Lamothe, was supposed to build 25 soccer stadiums in Haiti. He started one but never finished. I’m still asking what happened to the money for the stadiums.” 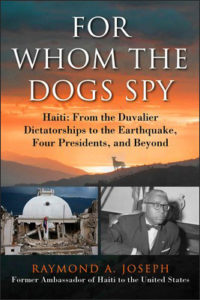 As ambassador, Joseph led fundraising efforts at the Haitian Embassy fronting Massachusetts Avenue, which in the weeks and months after the earthquake filled up with clothing and other donations left by well-meaning people. Meanwhile, Lola led a fact-finding mission to Haiti that included this journalist, and helped publicize her country’s desperate plight.

“Here I am, personally raising funds in Washington, and people around me thought I was going to share some of the funds with them,” he recalled. “That’s when I realized everybody was corrupt,” he said. “Corruption was everywhere, in the embassy and in the consulate.”

In 2015, the former ambassador published his autobiography, “For Whom the Dogs Spy.” The 352-page volume takes its title from a 1963 episode during the Duvalier regime, in which Papa Doc ordered all black dogs in Haiti be put to death. The bizarre decree came after Duvalier was told that a political opponent who plotted to overthrow the president had transformed himself into a black dog in order to evade capture.

Had he won the election, Joseph said, “the first thing I would have done is realign help to different parts of the country, because Haiti’s main problem is overcentralization and corruption. If you manage the money properly, you could solve all these problems. We could have had birth control on a large scale, but you’d need a government that believes in doing things like that.”

Another earthquake, an assassination and mass deportation

Haiti is now home to 11.6 million people, making it the most crowded, populated nation in the Caribbean, surpassing much larger Cuba and the neighboring Dominican Republic. Yet its economy, ravaged by COVID-19 and mismanagement, is in shambles, and annual per-capita income is less than $1,200.

This year, Haiti sunk even deeper into chaos—first from the assassination of its 53-year-old president, Jovenel Moïse, on July 7, by a group of Colombian mercenaries, then from a magnitude-7.2 earthquake that struck the country Aug. 14, killing at least 2,200 people.

And a series of mass deportations of Haitians from the US-Mexico border, where thousands of them had been seeking political asylum, will only make things worse, warned Daniel Foote, the former US special envoy for Haiti, who resigned in September to protest the Biden administration’s deportation policy.

“Deportation, in the short term, is not going to make Haiti any more stable,” Foote told a congressional briefing in October. “In fact, it’s going to make it worse.”

Joseph has little respect for the recently murdered leader, noting that “Moïse did all kinds of things against the constitution. He spent four years avoiding an election —not even for dogcatcher. We have gangs all over, and the government is behind the gangs.”

As if that’s not enough, one month ago, 17 American and Canadian missionaries were kidnapped in Port-au-Prince. The criminal gang that abducted them, 400 Mawozo, is demanding $1 million per hostage. On Nov. 21, two of those missionaries were released; it’s not clear when or if the other 15 will be freed anytime soon.

Joseph sees all this as part of a wider escalation of underreported violence and lawlessness.

Could a ‘Marshall Plan’ save Haiti?

“Historical injustices are connected with Haitian accomplices, and the international community is closing its eyes to the corruption and impunity of Haiti,” he said, estimating that five million Haitians live abroad, including nearly one million in the New York area alone. According to the World Bank, in 2020 the Haitian diaspora sent back $3.8 billion in remittances, up from $3.3. billion the year before—about one-third of the country’s entire GDP.

Haiti’s elder statesman said supports the idea of a multibillion-dollar Marshall Plan for his unlucky country that would keep Haitians home rather than forcing them to emigrate.

“Things would have been different were it not for embargoes and the gunboat diplomacy of France’s King Charles X, who imposed a debt of more than $20 billion in today’s dollars, mortgaging the Haitian economy until 1947, when the last penny was paid,” he said. “So, just as Europe was rebuilt after it was destroyed by war, Haiti also deserves the same.”

Does Joseph still harbor dreams of leading Haiti? He insists he doesn’t, but an Oct. 24 editorial in the online New York Sun has strongly endorsed him as the country’s interim president, and has urged the Biden administration and other Western Hemisphere heads of state to “step up” and help put Haiti back on the path to democracy.

“In every assignment to which he has been called by his country, Mr. Joseph has served with distinction,” said the newspaper, which has run the former ambassador’s columns for years. “Few, if any, can match his long record of educating the world on the significance of the slave revolt that created in Haiti the first black republic, an on the role that Haiti played in American history; it helped create the circumstances that made possible the Louisiana Purchase.”

It concluded: “To those who suggest that Mr. Joseph is too old, we respond that they don’t know him. He is still writing weekly for his own newspaper and working for democracy from dawn to dusk. He is beyond the age of personal ambition. President Biden would be wise to call him.”