Home The Washington Diplomat October 2012 At Top French Restaurant, Son Prepares to ‘Step Up to the Plate’ 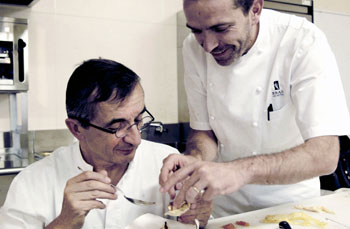 Also See:
‘Sister’ and ‘Somewhere Between’ and Repertory Notes

Renowned French chef Michel Bras, left, and his son Sébastien Bras cook up a storm together in Paul Lacoste’s documentary “Step Up to the Plate.”

Deciding to give up the cherished family business to your child is never easy — whether you run a mom-and-pop corner store or you’re the world-renowned chef behind a Michelin three-star restaurant in an idyllic slice of France.

In the mesmerizing new documentary “Step Up to the Plate,” French director Paul Lacoste, an amateur cook, looks at a dynastic succession in the world of haute cuisine, one whose familial struggles strike universal cords.

Ten years ago, Lacoste made a 50-minute television documentary about internationally renowned French chef Michel Bras. In 1992, the legendary hotel and restaurant eponymously named Michel Bras opened in Laguiole, France. Made mostly of glass with granite and slate, the strikingly modern structure appears to rise out of the middle of nowhere, overlooking the lush pastoral landscapes in the South of France, where the Bras family has lived for three generations.

In 1999, Michel Bras acquired the coveted Michelin-three-star ranking awarded to only 106 restaurants worldwide. In 2003, to reflect his son Sébastien’s growing partnership in the kitchen and the business, the restaurant was officially renamed Michel et Sébastien Bras, though it’s commonly referred to simply as Bras.

For “Step Up to the Plate,” Lacoste returned to Laguiole in 2010 to capture Michel’s retirement as he formally hands over the reigns of the family trade to Sébastien, nicknamed Sébo.

It’s not an easy position for Sébo. Sitting in the office, Sébastien explains to one questioning caller that he’s worked with his father in the restaurant for 15 years, so it’s not like he’s new to the game! He’s been accompanied to work by his wife, who managed the dining room as its hostess, just as Sébastien’s mother did while Michel cooked in the kitchen.

Even if Sébastien is ready to run one of the world’s top restaurants by himself, it’s not easy to escape the shadow of his father. That’s especially true when Michel still goes into the restaurant just about every day, a “retirement” scoffed at by Michel’s wife. In the kitchen, it’s not entirely clear to the staff who’s in charge as Michel overrules Sébastien at times. Still, they have a thoughtful and loving relationship that’s revealed in their respectful, if not entirely balanced, interaction throughout their numerous acts of collaboration: gathering top-quality ingredients from the market, picking fresh vegetables and herbs straight from the garden, testing and tasting new recipes, even opening a new restaurant in Japan.

The Japanese connection adds to the many ways in which “Step Up to the Plate” is readily compared to “Jiro Dreams of Sushi,” David Gelb’s dreamy documentary about 85-year-old Jiro Ono, arguably the world’s top sushi chef. Like Michel, aging Jiro has reduced his daily responsibilities — if only due to physical limitations — but has had difficulty completely letting go for the inevitable takeover by his fully competent son.

Step Up to the Plate
(Entre les Bras)
(French with subtitles; 90 min.)
Landmark’s E Street Cinema
4.5 out of 5 stars 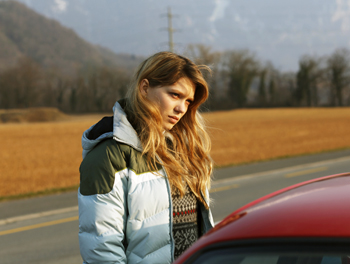 Léa Seydoux plays the titular role of a young woman living off the generosity and petty-thieving wits of her younger brother in “Sister.”

Here, he plays a young boy who has to support his perpetually dysfunctional older sister Louise (Léa Seydoux). The siblings are on their own, residing in a shabby apartment complex in an impoverished, blue-collar town at the base of the Swiss Alps, a stark contrast with the fancy ski resort above them. Louise can’t keep a job very long, snoozes in bed all day, and prowls bars at night sleeping around. Though only 12, Simon becomes the family’s breadwinner, riding the ski lift up the mountain to lofty heights where he steals ski gear from wealthy vacationers. Back down in the valley, he fences the purloined goods to locals, generating enough cash to support a meager existence for him and his sister, for which she’s grateful. But when Simon pairs up with a criminal migrant worker, the situation gets rather dicey for both Simon and his sister.

Meier designed “Sister” and the role of Simon specifically for Klein after his distinctive turn in her prior film “Home” (2008). That quirky family farce, her first theatrical feature, garnered a slew of honors.

Meier’s long anticipated follow-up, “Sister,” was a smash at the 2012 Berlin Film Festival before its successful tour of the international festival circuit. Rumors peg “Sister” as a leading contender for Switzerland’s submission for Best Foreign Language Film at the Oscars.

“Sister” largely lives up to all the hype. Meier’s streamlined direction and Agnès Godard’s crisp cinematography keep the action centered primarily on Simon. “Sister” mainly serves as a revealing character study of young Simon, using his relationship with Louise to flesh out the taut storyline. Klein and Seydoux form a talented thespian pair who deserve the lavish attention they’ve been getting for their startling brother-sister performances.

‘Somewhere Between’ China and America 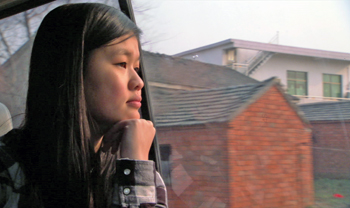 Haley Butler, 13, treks to Anhui Province in China to find her biological parents in “Somewhere Between.”

American filmmaker Linda Goldstein Knowlton’s poignant documentary “Somewhere Between” follows four Chinese girls adopted by American parents. Her film is not the first documentary about international adoption, but previous stories are largely told from the perspective of the (generally white) adoptive parents. Otherwise, we hear from the adopted child long after he or she matures into adulthood. Knowlton herself was inspired to make “Somewhere Between” after she and her husband adopted a 7-year-old Chinese girl named Ruby.

The four girls featured in the film were all adopted as the result of China’s strict “one-child” policy, which has inadvertently led to hundreds of thousands of babies being discarded. And in a traditional society that strongly favors males, the babies given up to orphanages tend to be mostly female — in fact, 175,000 children, mostly girls, were adopted by foreign parents in 26 countries, including 80,000 children adopted into American families.

But “Somewhere Between” is something different than a straight commentary on China’s population-control measures. It focuses more on how these girls come of age in today’s America as trans-racial adoptees.

Indeed, it’s unusual to hear young adopted girls, especially of color, speaking about their own lives. The four teenage protagonists in “Somewhere Between” grew up immersed with American cultural icons like “Sesame Street” and are called “bananas” — Chinese on the outside and white on the inside — by others as well as by themselves. But the joke doesn’t seem so funny as they become adolescents who question their identity, leading each on different journeys (though they all wind their way back to China) to reconcile with their roots.

On the surface, 15-year-old Jenna Cook seems to be well assimilated as an accomplished student at the most prestigious of prep schools. At Phillips Exeter Academy in New Hampshire, she plays guitar and ice hockey and serves as the JV crew team’s coxswain, a leadership role. Yet she pointedly observes that the position on the end of the boat is held by a person who “stands alone.” She’s scared of not being accepted if she’s not “perfect” and cries at the thought of her “abandonment” by her birth parents. In the summer after her sophomore year, she confronts her fears by volunteering at the Chinese orphanage where she lived as a baby.

Meanwhile, in famously progressive Berkeley, Calif., 14-year old Fang “Jenni” Lee feels abandoned again after her adoptive parents divorce, so she too travels back to China in search of her roots. There, she laments that, “In either country, I know I’m a foreigner.” But she finally finds an emotional connection with an orphan girl who has cerebral palsy.

Unlike the other girls, Ann Boccuti, 14, loves her life in a Philadelphia suburb with white picket fences and an American flag on each house’s porch and doesn’t have a real desire to return to China — until a trip to Europe changes her perspective.

But perhaps the most quixotic journey is undertaken by 13-year-old Haley Butler, who lives with a devoutly Christian family in Nashville and grew up as a child of the Deep South. She embarks on a quest to find her natural parents and, against all odds, finds them, leading to a remarkable reunion.


Partnering with the Goethe-Institut, the Hill Center at the Old Naval Hospital honors the 200th anniversary of the 1812 publication of “Grimm’s Fairy Tales” with the series “Family-Friendly Fairy Tale Films” (Sept. 30-Dec. 9). On 10 Sundays at 2 p.m., 10 new fairytale adaptations, with each one-hour-long film originally produced for German public television (ARD), will play at the Hill Center in German with English subtitles.

In the film and discussion program “Our Shared Future: Islamic Culture in Germany” (Mon., Oct. 1, 6:30 p.m.), Kübra Gümüsay, a noted German writer of Turkish descent now based in Oxford, presents a topical film of her choice before a talk with the audience. Medium Magazine named her one of the top 30 journalists under the age of 30 in 2011.