Home The Washington Diplomat October 2012 At the Pig, No Animal (Part) Is Left Behind 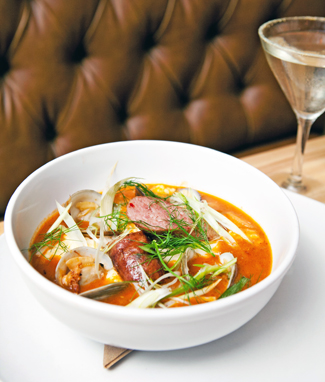 When founders David Winer, Antonio Oquendo and Josh Hahn created EatWell DC in 2003, they wanted to give local residents good and affordable dining-out options in Logan Circle and the surrounding area, options they believed were sorely lacking at the time.

Beginning with Logan Tavern, the group expanded to include Commissary and the Heights, also bringing Winer’s previously owned Grillfish into the fold. While the company keeps growing, the opening of its newest place, the Pig on 14th Street just north of Logan Circle, represents a departure, and downsizing, of sorts.

The Pig is a cozy neighborhood spot that’s smaller than other EatWell establishments — seating only 80 diners (with another 15 at the bar). It’s also more of a concept-driven destination than its sister ventures, which focus more broadly on American cuisine.

But that doesn’t mean the Pig is any less ambitious — quite the opposite. It goes whole hog, literally.

That’s because the concept behind the Pig is just that — the pig. It’s not a barbeque joint as the name might suggest. The décor does create a casual BBQ feel, with reclaimed wood wainscoting, butcher-block tables, white tile accents, cement floor, simple place settings and an interesting collection of enlarged excise tax stamps. And the menu does sport an excellent Carolina smoked BBQ.

But the Pig is a prime example of the whole animal movement that is gaining traction among environmentally conscious diners. This nose-to-tail concept is an extension of the slow food movement that emphasizes locally sourced, sustainable ingredients. Advocates of the approach focus on using the entire animal as opposed to the more typical (and wasteful) practice of using just recognizable cuts. The Pig buys entire pigs from a local producer and does all its own butchering.

While the Pig may be challenging for some Americans who are disinclined to eat offal, chef Garret Fleming has cleverly put together a menu based on small plates that allow diners to taste just a bit of the unfamiliar ingredients rather than facing an entire entrée.

The porchetta, for instance — roast pork belly stuffed with brains and hazelnuts and served with hog gravy and greens — will probably win over devotees once it’s sampled. Crispy pig ears, unusual but delicious, are less intimidating when served in a salad of caramelized onions, arugula and tomatoes with marrow vinaigrette.

Of course, not all of the Pig’s offerings are unfamiliar. For sausage lovers, the Pig has charcuterie plates dubbed “Little Pig” and “Big Pig.” Each includes a sample of pork-based cured meats with house-made pickles, condiments and grilled breads. The Big Pig also includes a chef’s terrain and cheeses.

Elsewhere on the menu, the chops, shank, cheek, ragu, barbeque, meatballs and ravioli are all are pork based. The wild boar ragu and braised cheek are standouts. The ragu, served with pecorino and broad ribbons of pappardelle that support the meaty rich sauce, is a hearty dish that’s perfect for the cold weather. The cheek is braised until meltingly tender and is well balanced with an aromatic sofrito and stone-ground grits.

Though the small plates are categorized as “Pig” and “Less Pig,” even the “Less Pig” choices incorporate a touch of porcine. The ravioli is stuffed with sweetbreads and bacon, the gnocchi is accented with crispy pork belly, and the shrimp and grits is kicked up a notch with a spicy pork chorizo sausage.

The menu only includes three dinner-size plates, but all are worth a try. The pork shank is a hefty portion served with a mushroom spoon bread that stands out all by itself. The buttermilk-fried chicken is dark and slightly spicy, with Thai chili gravy. And the burger — pork belly of course — is a crispy delight. 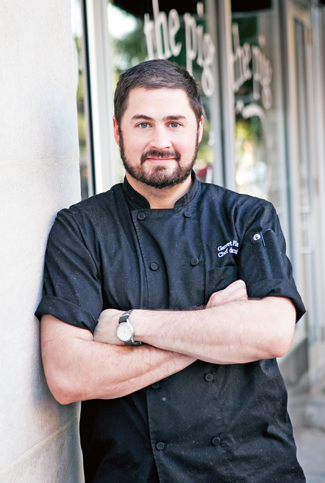 Chef Garret Fleming cleverly incorporates pig, including unfamiliar cuts and offal, into all the dishes at the new Logan Circle eatery the Pig.

Not surprisingly, the Pig does not exactly cater to vegetarians, though the menu does make a few concessions in a puff pastry with mushrooms and a mac and cheese dish. Sides of cauliflower, beets and greens are also tasty, and there is an excellent chickpea hash suitable for a vegan diet.

But you just can’t get around the tasty pink porker at the Pig, where the nose-to-tail theme weaves its way into the meal from beginning to end. The waiter proudly announces that a lavender-infused butter and lard mixture accompanies the opening breadbasket, for instance. The house special dessert, sundae bloody sundae, is an intensely chocolate confection that takes its name from the fact that pig blood is used to darken and intensify the taste of the chocolate ice cream, which, somewhat surprisingly, it does. Admittedly, the idea of blood-based ice cream may be off-putting to some, but the salty-sweet bacon-peanut brittle that comes with the sundae has been a real crowd pleaser. The berry shortcake provides another opportunity to squeeze in a pork product — with the richness of the lard-based biscuit cut by a slightly sharp ginger whipped cream.

In keeping with the local-sourcing trend, the Pig’s beverage program features local labels. Cocktails are made with spirits from the Catoctin Creek Distillery Co., for example, while the beer menu offers DC Brau on draft.

The owners of EatWell DC have made a commitment not only to locals in the area, but also to their staff. Pay exceeds minimum requirements and turnover is consequently lower than industry rates. This philosophy shows in the service. Once you get past the front door, where the flow is a bit awkward given the configuration of the space, the service is excellent. The staff has been consistently knowledgeable, agreeable and genuinely proud to be part of this new venture.

In today’s health-consciousness (or obsessed, depending on perspective) dining scene, it is surprising and somewhat refreshing to find an establishment that’s unabashedly unconcerned about what their food might be doing to your arteries. On the other hand, the Pig takes the environment and dining responsibly very seriously. EatWell DC even recently bought a former tobacco farm in La Plata, Md., to help ensure a consistent source of locally grown organic produce; the farm now supplies produce to all of its restaurants.

But a trip to the bathroom at Pig is not for the sentimental. The walls are papered with pig imagery including many adorable piglets that even the hardest heart would be hard pressed to resist. Designers might want to reconsider that one. Many a confirmed carnivore prefers to believe that meat comes from packages at the store not pig pens at slaughter houses.

Still, the Pig embraces the whole animal — cuteness, innards and all — and in the process, it’s educating diners to do the same, putting the often-underappreciated pig on a culinary pedestal.