Home The Washington Diplomat October 2012 With Flurry of New Programs, Meridian Moves With the Times 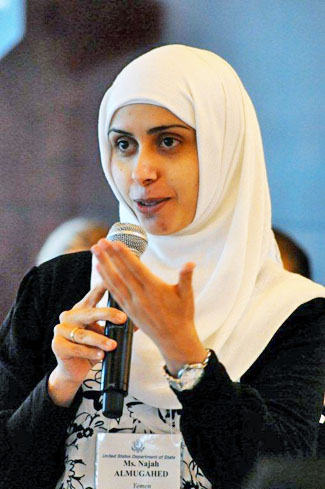 In 1919, after retiring from the Foreign Service, Irwin Boyle Laughlin built Meridian House at 1630 Crescent Place in Washington, D.C. But retirement didn’t suit him, and he returned to the diplomatic corps, serving as ambassador to Greece, and then Spain until 1933. Like its owner, Meridian House found renewed purpose in the service of international diplomacy: In 1960, the Laughlin family sold the house to a newly created nonprofit dedicated to international understanding.

Today, the Meridian International Center, which occupies Meridian House and the adjacent White-Meyer House, is a leading nonpartisan, nonprofit organization dedicated to fostering innovative international diplomacy through the exchange of people, ideas and culture.

And more than 50 years after its birth, Meridian is ramping up that exchange to an unprecedented degree, launching a flurry of new partnerships spanning from India to China and programs that range from global leadership forums to timely discussions on the Arab Spring, U.S. elections, world economy and other issues of the day.

Najah Almugahed of Yemen speaks at a discussion on the Arab Spring hosted by the Meridian International Center and the International Visitor Leadership Program.

As the State Department’s principal partner in the International Visitor Leadership Program (IVLP), Meridian facilitates an exchange program that brings thousands of leaders in various fields from around the world to meet with their professional counterparts in different cities across the United States. These visitors not only learn about American political, social and cultural life, but they share their own culture and perspectives with their U.S. hosts. Past participants include former Presidents Álvaro Uribe of Colombia and Nicolas Sarkozy of France, as well as former U.N. Secretary-General Boutros Boutros-Ghali, among others. To date, Meridian has conducted exchange programs for more than 65,000 foreign professionals over the last 50 years

In a city known for its pundits and talking heads, Meridian also provides a rare space for meaningful exchange of ideas: It hosts monthly breakfast meetings where business leaders and ambassadors meet to discuss economic opportunities and challenges in a featured country; Meridian’s Global Dialogue Dinners are “salon-style,” off-the-record conversations that encourage high-level officials to move beyond talking points and have thoughtful conversations about global policy; and Insights at Meridian presents ambassador-moderated talks on U.S. domestic policy issues with experts and opinion leaders (two recent programs previewing the U.S. elections were moderated by Costa Rican Ambassador Muni Figueres and Ambassador Claudia Fritsche of Liechtenstein, for instance).

Both Fritsche and Figueres have also been on hand for various other Meridian events, in particular those focusing on women’s issues, a burgeoning area of the center’s programming. For instance, Meridian recently hosted events for women ambassadors, entrepreneurs and climate leaders, as well as a gala premiere for the documentary “Half the Sky,” which chronicles how women around the world live, and a discussion on how Pakistani women are combating radicalization and injustice in a highly conservative, patriarchal society. 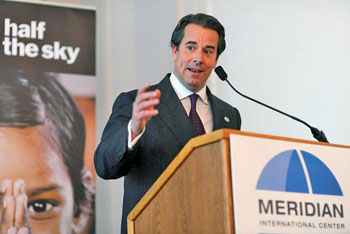 Ambassador Stuart Holliday, president and chief executive officer of the Meridian International Center, opens the program for a screening of the documentary “Half the Sky: Turning Oppression into Opportunity for Women Worldwide.”

Finally, to further international understanding through cultural exchange, Meridian works with arts organizations and museums on traveling exhibitions abroad, and offers training programs aimed at strengthening the role of museums in cultural diplomacy. In fact, it’s organized cultural exhibitions at 357 host venues in 44 U.S. states and 55 countries around the world.

The house itself boasts impressive rotating exhibitions. Past shows have highlighted contemporary ceramic painting from China (profiled in the November 2011 issue of The Washington Diplomat in “Ancient Capital of Ceramics Goes Modern in ‘CHINA Town‘”), sacred icons from Ukraine (profiled in “Iconic ‘Glory’: Ancient Artifacts, Religious Items Tell Story of Ukraine” in the December 2010 issue) and efforts to safeguard the world’s cultural heritage sites (“Preserve and Protect: Meridian Showcases Mission to Safeguard World’s Endangered Sites” in the May 2010 issue).

Meridian has many more programs — all highlighted on a new website rolled out earlier this year. Some, like IVLP have long been the bread and butter of the organization; others represent a forward-looking approach to global engagement.

Meridian’s mission today is the same as it was more than five decades ago, but its strategy has evolved to keep pace with a dynamic, increasingly globalized society. “[Meridian] is adapting to the new reality that American businesses, and well as governments and NGOs, need to be part of that conversation,” said Ambassador Stuart Holliday, president and chief executive officer of the Meridian International Center. “So what we’ve done is taken our traditional work and we’ve also begun working with the private sector to create public-private partnerships.” 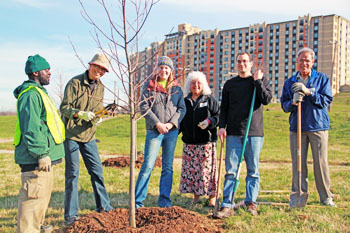 Last year saw the launch of Meridian’s office in New Delhi, India, and its partnership with the Federation of Indian Chambers of Commerce and Industry (FICCI) as well as the China International Culture Association. These new partnerships with the world’s largest democracy and the world’s fastest-growing economy will serve as a platform for dialogue on issues relevant to U.S.-India and U.S.-China relations.

Building on its historical ties to France — the White-Meyer House was built by Henry White, an ambassador and Treaty of Versailles signatory, and later housed a French mission — Meridian also kicked off the U.S.-France Leadership Dialogue this year. The two-year initiative with the French Embassy will bring together French and American policy leaders in government, business and the nonprofit sectors to identify areas of bilateral cooperation.

Locally, a new partnership was forged with the Ronald Reagan Building and International Trade Center in D.C. to jointly host events such as the Meridian International Children’s Festival, trade delegations, international visitors’ meetings and art exhibitions.

To facilitate these new partnerships and equip decision-makers with the necessary skills, Meridian is expanding its focus on leadership development. “We are making a long-term investment in developing global leadership,” Holliday wrote in a recent op-ed. “Our strategy is to keep decision-makers involved beyond the initial time of their program.”

This summer’s Innovation Summit is an example of that long-term investment. In partnership with the State Department, Meridian invited 65 young African business and social entrepreneurs to a leadership summit focused on creating economic opportunities for young people and strengthening U.S.-Africa economic ties. 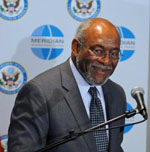 Assistant Secretary of State for the Bureau of African Affairs Johnnie Carson shares remarks at the African Innovation Summit.

“What’s happening in Africa is really quite amazing,” Holliday told The Washington Diplomat. “There’s this new generation of civic actors in the business world and NGO world who are really doing amazing things with technology [and] with innovation in terms of how to improve their communities and how to grow jobs.”

The latest project is the Meridian Global Leadership Institute, which will provide high-level executive business training through a series of courses that prepare corporate leaders for entering overseas markets. The ambitious program is aimed at Fortune 500 executives and emerging leaders at multinational companies, as well as small- to medium-size business. Courses will prepare business leaders “to operate in an international environment where collaboration exchange and understanding other cultures is very important,” Holliday said.

The launch date for the Meridian Global Leadership Institute will be announced Oct. 12, the day of the 44th Annual Meridian Ball, a crown jewel in Washington’s social calendar. The annual event attracts a cross-section of notables from the diplomatic, political and business spheres as well as the who’s-who of Washington’s social scene.

This year, Meridian is capitalizing on the popularity of the ball by hosting the first annual Global Leadership Summit the same day. The summit was created to “continue the dialogue and exchange and networking that typically happens at the ball in a more structured way,” said Meridian spokesperson Emily Jansen. The inaugural summit will be co-hosted by Gallup and the Ronald Reagan Building and co-chaired by General Dynamics CEO Jay L. Johnson and Sydney McNiff Johnson, a principal at SNR Denton’s global energy practice. 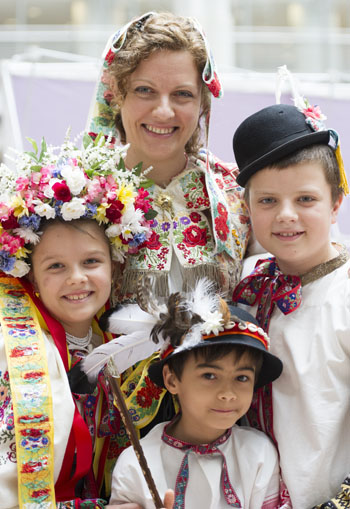 The Meridian Center created the International Children’s Festival, attended by more than 6,000 people last year, as a way for embassies to connect with young people in Washington.

With an increased focus on engaging leaders, Meridian’s programs increasingly go beyond providing information or a venue for networking. They work toward solutions.

“There are probably the same number of events here at Meridian,” says Holliday, “but they’re more focused on outcomes in terms of actually gathering people together to work together versus simply to provide content to an audience. There are a lot of groups in Washington that are competing to provide information to audiences,” he pointed out. “Our focus is on providing a forum for leaders to gather, to deliberate, collaborate, and actually get some things done.”

As an example, Holliday cited a summit in Madrid that took place in March of this year. The global gathering, which grew out of a program Meridian started here in Washington, provided a forum for corporate, government and nonprofit leaders to discuss how civic service and volunteerism can address the challenges created by the economic crisis in Spain, the United States and other countries. Holliday said the summit is just one example of Meridian’s effort to move beyond the stereotypical “all talk, no action” dialogue model to a solution-oriented approach.

Though Meridian’s focus is international, it has a strong local presence, too. It created the International Children’s Festival, attended by more than 6,000 people last year, as a way for embassies to connect with young people in Washington through dance, music, costumes and food. Among other things, Meridian’s Live Local, Think Global initiative offers free public education programs that bring speakers to D.C. schools and digitally connect local classrooms to those in other countries. And every summer, Meridian coordinates the Dupont-Kalorama Museum Walk Weekend, which includes free admission to nine “off-the-mall” museums.

In both the global and local community, the Meridian International Center is striving to serve as a model of civic engagement and diplomacy. Ever mindful of our changing world, Meridian is brokering partnerships and building leaders to navigate a complex global society. And in the second half century of its existence, Meridian remains an innovator in international collaboration.