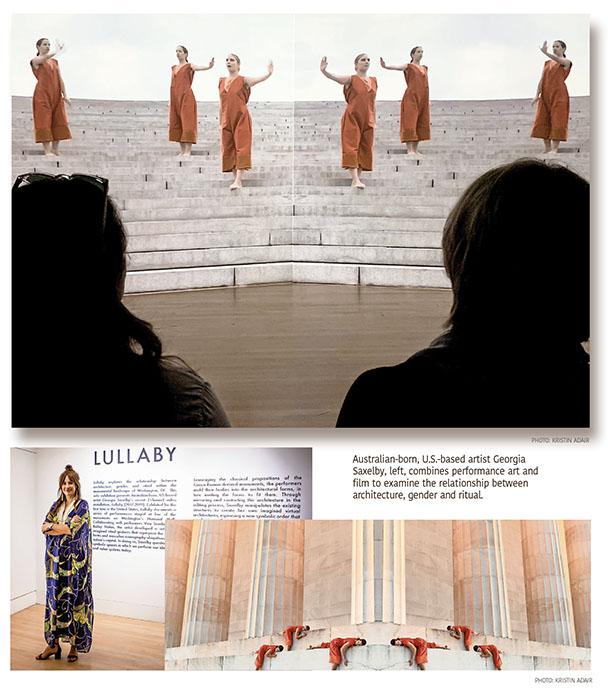 When people visit D.C., they are often dwarfed by the bold, imposing architecture of the city’s monuments. But in Australian-born, U.S.-based artist Georgia Saxelby’s vision, the architecture conforms to the people as she offers a feminine twist to the masculine-tinged iconography seen throughout the nation’s capital.

“Lullaby” at the Embassy of Australia encapsulates Saxelby’s unique vision with a two-channel video installation that combines performance art and film to examine the relationship between architecture, gender and ritual.

Three women, dressed in orange tunics, mold their bodies to the columns and steps of five monuments along the National Mall, creating a striking contrast to the white, Greco-Roman-inspired architecture. Collaborating with performers Viva Soudan and Bailey Nolan, Saxelby developed a series of imagined ritual gestures. The women perform circular movements around the large, immovable monuments, while close-up shots of the women’s hands add an element of intimacy to the choreography. The jarring visual of a modern, dynamic performance set against the permanence of historic monuments shakes up our preconceived notions about these symbolic structures and forces us to re-evaluate the cultural identity and values systems on which they are based.

Saxelby edited the video to mirror itself, so that the three dancers are multiplied to six or nine, manipulating the film to create an imagined virtual landscape. At other times, the screen is dominated by columns or rotundas alone, and no dancers are anywhere to be found.

“Lullaby” adds a female presence to male-dominated public spaces, juxtaposing harmonious images in which the women blend into the architecture around them, with images of conflict, where the women bend at odd angles and fail to conform their bodies to the rigid, blunt-edged structures.

Washington, D.C., is rife with institutions and memorials, most of which depict powerful men. Saxelby wanted to challenge the masculinity behind these monuments, reimagining male-oriented historical narratives through the female form.

“I grew up looking around at all the same white columns, bronze men on horses. All of those same monuments are in Australia as well, so it’s almost trying to excavate the depths of the Western cultural imagination,” she said. “It is not just critiquing masculinity. It is a step toward an ongoing question: How do we dynamically represent women’s power as present and active?”

The Sydney-born artist lived in New York before the 2017 Women’s March following President Trump’s election prompted her move to D.C.

Once here, she turned the cultural influences of the Women’s March and the MeToo movement into an interactive installation called “To Future Women.” Displayed across the city at museums such as the Hirshhorn and the Phillips Collection, the exhibit asked visitors to write letters that would be sealed in a time capsule and displayed again in 20 years.

Like “To Future Women,” “Lullaby” draws on themes of political protest, women’s rights and Western cultural norms. For Saxelby, D.C. is at the heart of these issues. “Power’s very concentrated here,” she said. “You also have all the national institutions that are meant to represent our national identity and Western culture in general. What happens here flows on to affect my culture on the other side of the world.”

On the opening night for “Lullaby” on July 9, the Australian Embassy’s deputy head of mission, Katrina Cooper, described the exhibition as a “new history of iconic landmarks in D.C.”

This year marks the 50th anniversary of the Australian Embassy’s Scott Circle location. The embassy will move to a temporary location while the building undergoes an extensive renovation. “Lullaby” is the last exhibition to be held in the embassy building as it stands today.

As such, “Lullaby” is a poignant reference to the future of architectural memorialization.

Even the name of the exhibit suggests storytelling. It asks us to consider how we recount history and how history can be retold and reimagined. This is what makes Saxelby’s work a “new history” — one that tells the story of a brighter, more inclusive future.

Virginia Sciolino is an editorial intern for The Washington Diplomat.