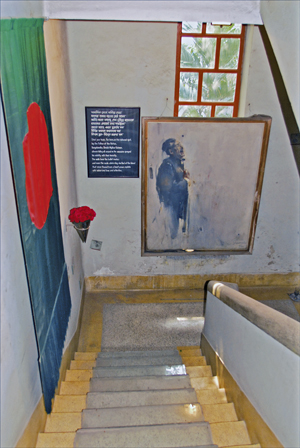 Bangladesh is a developing country with significant achievements but no shortage of problems to confront. One of the most densely packed places on Earth, Bangladesh has enjoyed impressive development gains and steady economic growth, although poverty and corruption remain rampant. The minimum wage for garment workers was increased in 2013 from $38 per month to a still-paltry $66 — only after 1,129 of them were killed when their factory in Dhaka collapsed earlier that year.

The nation of 160 million has a healthy democracy, but also a turbulent history marred by military coups and friction between Islamists and secularists that shapes the political discourse to this day.

Of all its problems, the one that hits closest to home for Sheikh Hasina, the country’s prime minister, isn’t a pocketbook issue — it’s political, and personal. Nearly 40 years after her father, Sheikh Mujibur Rahman, the country’s first prime minister, was assassinated in a military coup, her government continues to pursue the killers. The coup plotters also killed her mother, three of her brothers and several other relatives. She and her sister escaped the bloodbath because they were in Germany at the time.

A bloodstained staircase at the Dhaka residence-turned-museum of Sheikh Mujibur Rahman, father of modern Bangladesh, recalls his Aug. 15, 1975, assassination by a group of army officers. His daughter, now Bangladesh’s prime minister, is seeking the extradition of Rashed Chowdhury, who is accused of being one of the key plotters of the attack and has been living in the U.S. since 1996.

Five of the assailants were hanged in 2010, one died in Zimbabwe while on the run from the authorities and six others are still at large 16 years after being sentenced to hang by a Bangladeshi judge. One, Noor Chowdhury, lives in Canada (reportedly as an illegal immigrant, at least as recently as 2012), which abolished capital punishment in 1976 and won’t extradite him because he would face the death penalty upon return to Bangladesh. Meanwhile, Rashed Chowdhury, who is accused of being one of the key plotters, has been living quietly in the United States since at least 1996. He reportedly entered the country on a tourist visa and was eventually granted asylum.

Now, the government is making an all-out diplomatic and lobby push to get Chowdhury back, pressing the United States to extradite him.

Chowdhury isn’t the first person facing serious criminal charges to be granted asylum in the United States. Suspected war criminals and others accused of human rights violations have also been granted asylum. Some are still free; others have been deported or are still involved in legal proceedings. Last February, for example, Jorge Sosa Orantes, a Guatemalan who won asylum despite allegations of war crimes in his home country, was sentenced to 10 years in prison for fraudulently obtaining U.S. citizenship.

Unlike Canada, Mexico and most European countries, the United States doesn’t necessarily deny all extradition requests when the individual is facing a death sentence. In 2007, the United States handed Mohiuddin Ahmed, one of the co-conspirators in Rahman’s assassination, back to Bangladesh and he was hanged three years later. But given Bangladesh’s spotty record on human rights — Human Rights Watch and others have accused the government of using torture — and the fact that Chowdhury has already been granted asylum, which is rarely revoked, the U.S. may be hesitant to extradite him.

Neither DHS, which has the authority to revoke Chowdhury’s naturalization under certain circumstances, nor the Department of Justice (DOJ), which is considering the extradition request, would comment on this specific case. DOJ wouldn’t even outline its criteria for considering extradition cases. But Tahseen Ali, who teaches South Asian history at the University of Houston, says that DHS is reportedly reviewing how Chowdhury obtained residency. He believes that he should be extradited.

“It [the extradiction] will serve as a much needed warning to those who would believe that they can commit murder and transgressions against the Bengali nation with impunity,” he said. “Chowdhury’s extradition would bring a certain degree of closure to a national wound, some measure of justice.”

That national wound has been festering for decades. After the 1975 putsch, the military junta that took power gave the assassins immunity from prosecution for 20 years. According to Mohammad Ziauddin, Bangladesh’s ambassador to the U.S., some of the assassins became diplomats and ambassadors and one was even elected to Parliament.

A string of military coups and countercoups followed the assassination, until a fragile democracy was restored in 1991. Since then, power has seesawed between the Bangladesh Nationalist Party (BNP), backed by religious conservatives, and Hasina’s secular Awami League.

Hasina herself lived in self-exile in India after the coup until 1981, when she returned home. She spent much of the next decade in prison or under house arrest. Bangladesh held its first election in 1991 and her BNP rival, Khaleda Zia, was elected. Five years later, she turned the tables, winning an election to become prime minister. Voted out of office in 2001 in what she called a rigged election, she survived an assassination attempt in 2004, a 2008 illness that caused her to seek treatment in the U.S. and allegations of corruption that resulted in several court cases before she returned to power in 2009.

She then angered Islamic conservatives by launching war crimes trials against political opponents who had sided with Pakistan during Bangladesh’s bloody war for independence. Her secular supporters say she is fighting hard-line Islamists who want to impose Sharia law on the tolerant, Muslim-majority nation, while Hasina’s critics accuse her of using the threat of extremism to crack down on dissent.

Re-elected to another five-year term in January 2014 amid a BNP boycott, Hasina’s government is now apparently making a renewed push to have Chowdhury extradited. It has hired an American PR firm to try to galvanize support for the extradition, and South Asia experts say that she’s prepared to devote considerable resources to bring those accused of killing her father and family members to justice.

“It has always been the top priority for Sheikh Hasina,” said Teresita Schaffer, a fellow at the Brookings Institution who was the U.S. ambassador to Sri Lanka in the ’90s, and also served as deputy assistant secretary of state for the Near East and South Asia. “The Bangladesh government has devoted huge amounts of time and resources to a process of trials for alleged war crimes in the independence war as well. This is, from Sheikh Hasina’s perspective, part of the same cause: punishing those who opposed Bangladesh and especially those who committed crimes in doing so. So it is utterly unsurprising that her government should throw resources at the problem.”

The fact that Chowdhury hasn’t been extradited to date has led some conspiracy theorists in Bangladesh to speculate that he may have been a CIA asset or even that the ’75 coup had CIA backing. But analysts say that anti-American sentiment in Bangladesh is nowhere near what it is in neighboring Pakistan, so the Chowdhury case may not poison relations between the two countries.

“Anti-American feelings in Bangladesh are not comparable to Pakistan’s,” although the country has resisted U.S. pressure to democratize, said Frederic Grare, director of the South Asia Program at the Carnegie Endowment for International Peace. As for Chowdhury, if he isn’t extradited, “it would perhaps bolster conspiracy theories, which in any case tend to flourish everywhere in the subcontinent, but the society is very divided over the issue.”

Despite the dispute, bilateral ties are relatively strong. Ali of the University of Houston said that Bangladeshis still remember American support during their 1971 war of independence, and Schaffer noted that the United States has provided both aid and a huge market for goods made in Bangladesh.

“There are strains from time to time — at the moment, the Bangladesh government is upset that the United States has restricted their access to a trade program that is supposed to benefit developing countries, for example,” said Schaffer. “But Sheikh Hasina has generally had pretty good relations with the U.S. leadership.”

The extradition decision may come down to how certain U.S. officials are that Chowdhury is guilty of the crimes he was convicted of and how he’ll be treated if he is sent back to Bangladesh. Meenakshi Ganguly, South Asia director at Human Rights Watch, said that those responsible for abuses should be brought to justice but warned that foreign governments need to assess claims and ensure that the person extradited will receive a fair trial and will not be subjected to torture. She noted that international law prevents governments from returning any person, including criminal suspects, to a country where they are likely to face torture or other ill treatment.

The U.N. Convention against Torture (CAT) states that countries making such a determination “shall take into account all relevant considerations, including … the existence in the state concerned of a consistent pattern of gross, flagrant or mass violations of human rights.”

In a March 2014 report on asylum, the D.C.-based Center for Immigration Studies concluded that even war criminals or terrorists may be entitled to asylum protection based on the CAT.

“There have been numerous allegations that Bangladesh authorities have failed to ensure fair trials or prevent torture in custody,” said Ganguly. “Before an extradition, it is the responsibility of the sending countries to seek human rights protections.”

Ganguly said that Human Rights Watch recommends a fair trial and protection from torture in Chowdhury’s case. She also pointed out that European countries seek protection assurances against capital punishment before complying with extradition requests. But it would be much trickier for the United States to do so because it has no abolition on capital punishment. It’s also unclear whether Hasina’s government would consider making a compromise — perhaps agreeing not to hang Chowdhury, for instance —in order to secure American acquiescence.

But with the 40-year anniversary of the coup coming up on Aug. 15, what is clear is that the government of Bangladesh will ramp up pressure in the months to come. In a recent editorial, Ambassador Ziauddin argued that the United States could “demonstrate real leadership” by extraditing Chowdhury.

“His well-recorded self-confession and conviction for the murders make him ineligible for asylum in the U.S.” he wrote. “In addition, his failure to disclose his crimes to American authorities should, according to long-established immigration law, prevent him from making the U.S. his safe haven.”

Ali said he was cautiously optimistic that Chowdhury would eventually be extradited.

“If the murderers and killers of the ‘Father of the Nation’ and his family cannot be brought to the dock of justice, then how will the rest of us fare against those who would and might usurp the rule of law?” he asked.