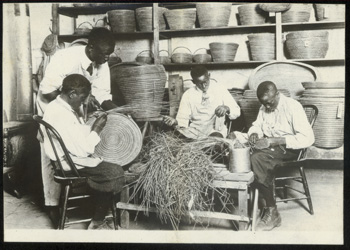 When something is as ubiquitous as baskets, it’s easy to take them for granted. For most of us, baskets are one of two things: utilitarian or decorative. But they are also woven of a rich history that crosses oceans and defies unimaginable acts of human cruelty. They’ve survived generations to become not only functional but pieces of fine art.

That’s the lesson in “Grass Roots: African Origins of an American Art,” on display at the Smithsonian’s National Museum of African Art. The show, organized by the Museum for African Art in New York, traces 300 years of basketry, starting with the use of coiled baskets in the domestication of rice in West Africa, through the transatlantic African-American slave trade, to current basket makers residing in the American South.

“We like to create and host exhibitions that demonstrate Africa’s relevance in the wider world,” said Christine Mullen Kreamer, the museum’s deputy director and chief curator. “This show does it. It talks about African knowledge — knowledge of rice cultivation, knowledge of basket making — and how this knowledge, this expertise, made its way through the most horrendous, horrible and brutal conditions of the Middle Passage to the American shore, where this knowledge then enriched the American economic landscape and also our cultural landscape in that this … appreciation of technique and beauty in the basket tradition really has an ongoing life, a relevance today.”

Still an economically viable commodity, basketry in the Lowcountry, the coastal region stretching from Florida to North Carolina, got its start when slaves were seized from Africa and shipped across the Atlantic to labor on Southern plantations three centuries ago. They brought with them their farming expertise, transforming the economic landscape, along with their skill as basket weavers, contributing an enduring cultural legacy.

Fanners — wide, winnowing baskets used to separate rice grains from husks — were the first to be introduced. In an example of how these baskets acted as a bridge between continents, a 15th- to 17th-century fanner from Mali shares traits with one from about 1890 from the Wedge Plantation in South Carolina, as well as with a more recent basket made in 1998 in Senegal. 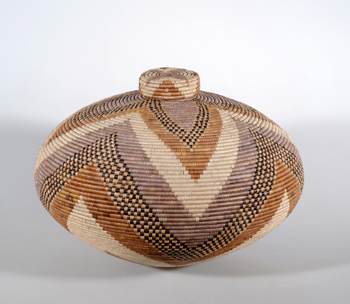 A late 20th-century calabash cover from Senegal and a South African basket are among 200 exhibit items — including photographs such as the North Carolina basketry shop pictured at left — that trace the long, complicated history of basketry, starting with their use in the domestication of rice in West Africa, through the transatlantic slave trade, to today’s basket makers in the American South.

In the early 1900s, basketry underwent a revolution as a popular object to own, and by 1930 basket makers had set up stands along the highway to sell their wares, creating a supplementary form of income and, perhaps unintentionally, iconic works of art. The figure of a woman balancing a basket on her head, for instance, became a symbol for artists who transformed Charleston, S.C., into a haven for creativity.

The exhibit tries to replicate a marketplace with a large, central display. “It gets people to stop and go, ‘Wow! These are really beautiful baskets,'” Kreamer said. “It also emphasizes that these are marketable,” she added. “These artworks are treasured and they bring economic value to those who make and sell them…. They can reach the art museum market as well as the craft market.”

The show is one without borders, both literally and figuratively. Intended to illustrate the bridge between American and African cultures, the majority of the exhibit occupies one large, open room. “They’re all out there for you to see,” Kreamer noted of the baskets. Visitors start in an introductory gallery of fanners and pot lids, “and then you enter the big room and you see to the far wall these similar forms from South Africa, and then you look to the right and you see similar forms from West Africa or the American South — you realize, ‘Wow, these are connected.'”

For instance, a covered basket that South Carolina basket maker Nathaniel Wright made in 2006 features a stepped lid that resembles stepped-lid baskets from late 19th- or early 20th-century Congo.

The baskets come in all shapes and sizes, some with handles, others with tiny necks and voluptuous bodies, and still others shaped like hats (such as one by Irene Foreman in South Carolina in 1980) or a cup and saucer (by South Carolinian B. Cousette in 2005). They also come in varying shades of brown and tan and even colors — such as three vibrant orange and blue calabash covers from late 20th-century Senegal made of grass and synthetic fibers — or decorated with beads, such as a late 20th-century calabash cover from Chad. They also represent all uses, from the practical (waterproof baskets for carrying liquids) to keepsake pieces such as a pearl-crusted South Carolina wedding basket from 2006.

But the show is about more than displaying beautiful, interesting baskets. “If you just simply had a few baskets coming from Africa, I don’t think it would really give the sense of how agriculture is part of a larger expressive culture,” Kreamer said. To that end, visitors also see the tools basket makers use, the religious objects Africans used to pray for good harvests (such as two 16th-century figurines from Sierra Leone used to guard rice fields), and five videos featuring basket makers demonstrating their techniques and telling their stories.