Blue Sky Only Beginning of Klein

“Yves Klein: With the Void, Full Powers” showcases the French artist’s legendary blue monochromes, as well as the many different media that this important figure in post-war European art consistently explored.

The retrospective “Yves Klein: With the Void, Full Powers” showcases Klein’s legendary blue monochromes, but also gives Hirshhorn visitors an expansive look at the many different media that this important figure in post-war European art consistently explored. The Hirshhorn display is — stunningly — the first major U.S. exhibition of Klein’s work in 30 years.

The display includes about 200 works from all of Klein’s major series, including his Anthropometries, Cosmogonies, fire paintings, planetary reliefs and blue monochromes, as well as selections of his lesser-known gold and pink monochromes, body and sponge reliefs, “air architecture” projects and immaterial works. The installation also delves into the artist’s creative process and conceptual projects through a range of ephemera, including sketches, photographs, letters and writings. In all, the Hirshhorn effectively conveys Klein’s unique vision of the world, which revolutionized the European art scene from 1954 to 1962.

“Klein’s short but intense career is a pivotal moment in contemporary art history,” said Kerry Brougher, the exhibition’s chief curator. “His work questioned what art and even society could be in the future, and it provided new pathways leading to pop art, minimalism, conceptual art, installation and performance.” 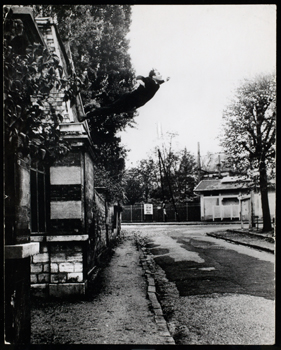 The exhibition kicks off with an examination of Klein’s early explorations of color with pastels, watercolors and more than 15 colored monochromes created during the mid to late 1950s. One is struck almost as much by the skillful arrangement of these pastels as the works themselves. However, it seems that a dialogue among the works was not Klein’s intention. In fact, he was appalled to learn that people initially took the different monochromatic colors to be a sort of interior design. That’s why he eventually graduated toward a consistent pigment — blue.

Klein’s general rejection of representational art was meant to force viewers to find their own meaning in the voids he created. Within that void, it is Klein’s glorious, vibrant ultramarine blue — ultimately patented and called International Klein Blue by the artist — that dominates the exhibition.

Born in southern France, Klein had visions of limitless blue from an early age. As a boy lounging on the French Riviera with friends, he claimed responsibility for the azure blue sky when each playfully decided to divide ownership of the natural world.

“The blue sky is my first artwork,” Klein said, according to his friend Armand Pierre Fernandez.

With the most intense of his blue monochromes, the viewer’s mind swells with a nearly hypnotic fullness, as one transposes his or her own mental imagery onto the solid space. Interestingly, Klein used not only brushes but sponges and other implements to impart his colors onto the canvas. He employed these tools as art themselves, as well. In fact, some of Klein’s paint-infused sponges are among the most compelling works in the exhibition, as they take on an aquatic, kinetic quality. The sponge was the material, but it contained the immaterial — paint.

Also striking are Klein’s Anthropometries, or use of nude females as “living brushes.” To create these works, he employed naked females covered in blue paint and dragged or laid them across canvases to create an image that represented — at least vaguely — the human form. These interpretations of a nude — definitely not a finely painted woman in the traditional sense of the artistic nude, but an actual nude woman — are mesmerizing.

“My brushes were alive and remote-controlled,” Klein once said.

We also learn that these images were inspired at least in part by the eerie shadows that were left by bodies incinerated in Hiroshima, a place that Klein himself had toured after World War II. 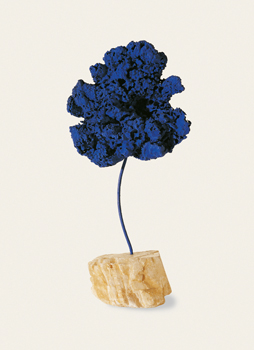 Klein’s work is at times a bridge between conceptual and performance art. In the same vein, he once sold “immaterial,” or absolutely nothing, to patrons for gold ingots. He would then throw the gold into the Seine River, draw up receipts and burn them. The point? To create an artistic event in which all that remained was the experience, or the memory.

It makes one wonder what Klein would have thought if he knew that some of his monochromatic paintings would later sell, posthumously, for tens of millions of dollars.

Klein’s groundbreaking, intellectual approach to neo-Dada or post-modernist art is explored deeply at the Hirshhorn. It is sometimes hard to wrap one’s head around the meaning of the “voids” that Klein obsessed over, but in the Hirshhorn’s skilled hands, we walk away with a much better comprehension of his unique view of the world, and the voids that wonderfully filled it.