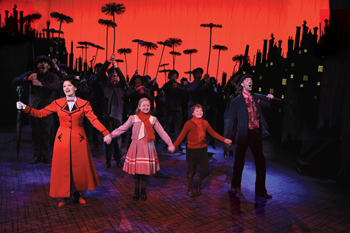 The Broadway tour production of “Mary Poppins” is a mixed carpetbag of tricks.

First off, it’s difficult to seriously tarnish a show with such beloved, timeless and cheerful imagination — and the Kennedy Center doesn’t even come close to committing this transgression. But while this production of the famed magical nanny who transforms an unhappy family will no doubt thrill children, for older, more discerning eyes, there are a few pitfalls.

The good news is that the sets, costumes and lighting are visual wonders. Raindrops of flickering lights pour down over dreary London streets, while the Banks family home unfolds like a giant dollhouse in a pop-up book. Prop tricks bring to life a fantasy world mostly reserved for animation and special film effects. And Mary and her young brood’s escapades into Bert’s paintings are filled with brilliant colors and statues that not only come to life, but happen to know exquisite choreography as well.

The not-so-good news is that while this elaborate display of technical and creative wizardry can be staggering, it also tends to overshadow the play’s characters and storyline. It makes you wonder if the director hasn’t inadvertently dipped into Mary’s potent spoonfuls of sugar.

The unfortunate result is that Mary Poppins, herself, pales in comparison to what surrounds her. Partly responsible for this effect is the decision of the producers — Disney and Cameron Mackintosh — to pattern this Broadway Mary after her character in the original book series by P.L Travers. The books were written in the 1930s during the Great Depression, when life was less than carefree. Theater-goers married to the 1964 “Poppins” movie therefore might be a bit disappointed in this production. Not only is Mary not Julie Andrews (though we knew that going in), she’s a vainer, sterner (albeit, tap-dancing) variety — less the warm, approachable matriarch we fell in love with on screen. In fact, the character of Bert, Mary’s chimney-sweeping, sidewalk-painting entrepreneur friend, tends to upstage her quite a bit — and not just by all of his occupations. This is true except for when Mary is flying, of course. No one can beat her entrances and exits.

Caroline Sheen, from the original U.K. tour, reprises her role as Mary Poppins, while the original London and Broadway star Gavin Lee assumes the role of Bert. Despite her character’s more serious demeanor, Sheen gives a high-quality, though somewhat stiff, performance. Lee’s performance as Bert, on the other hand, reminds one of the dexterity, elocution and even physical resemblance of Dick Van Dyke, which is sure to satisfy fans of the film version. Bert’s magic often overrides Mary’s — with his powers being charisma, swift, rhythmic feet and a strong voice. He even moves mammoth scenery with the gentle push of his hand and a puff of air through his lips. 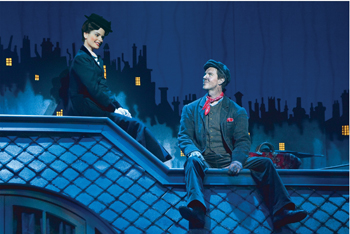 Playing the children, Bailey Grey (as Jane Banks) and Carter Thomas (as Michael Banks) — who alternate their roles with Kelsey Fowler and Bryce Baldwin, respectively — are strong singers and find their own moments to shine. The other supporting cast is entertaining, especially Ellen Harvey as the foreboding Miss Andrew, who was Mr. Banks’s nanny when he was young, causing him to grow up into a joyless drone.

Another setback of this production is that Mary and her entourage outlast their welcome by at least half an hour, which can feel like an eternity in the land of musicals. Parents will likely have to carry out their sleeping little ones and explain the ending to them the next day.

Branching out in other ways from the earlier film version, this “Poppins” throws in more extras — some that work and others not quite so much. Stephen Mear’s choreography is diverse and tantalizing. A favorite is when marbled park statues come to life and take over the stage in a graceful and strong ballet, adding a mystical element to Mary, Bert and the Banks children’s outing. Second to that is a beefed-up “Step in Time” tap number that again showcases Lee’s agility.

Newly created songs, however, like “Practically Perfect,” are bland and only seem to stretch the show out needlessly. The confusing carnival scene and costumes chosen for the infamous “Supercalifragilisticexpialidocious” number are another example of where the show takes a nosedive, with the scene feeling bizarre and ineffectual.

Aside from these bumps in the road, the production’s reputation and expensive sets have paid off. “Mary Poppins” has been enjoying stellar success since it premiered on the London stage in 2004 and then hit Broadway in 2006. Worldwide to date, the show has grossed nearly $400 million. And it’s sure to pack the house every night during its stay in the nation’s capital.

If only for the sake of sharing memories and passing along traditions with children, “Mary Poppins” is worth the trip to the Kennedy Center. And the timing, summer break for the kids, couldn’t be better.