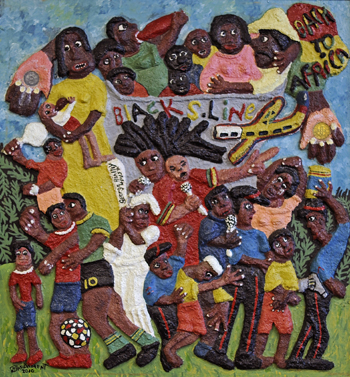 Over the years, the Inter-American Development Bank’s Cultural Center, under director and curator Félix Ángel, has become an unparalleled venue to trace the roots and progress of Latin American art through a series of exhibitions focused on certain regions, countries and time periods.

Michael Parchment’s “From Slavery to Freedom”

The results have often been surprising — for the great diversity as well as similarities that revealed themselves — and consistent in that so much of the art was inspired by certain universal elements. Colonialism, indigenous cultures, the challenges and eventual embrace of modernism juxtaposed with the traditional, and excitement tinged with wariness toward new technologies and globalization have all cropped up time and again in the center’s thematic shows.

The current Inter-American Development Bank (IDB) exhibition, “Contemporary Jamaican Artists,” springs almost organically from all of these underpinnings. It also embodies the “About Change” series of exhibitions, a project implemented by the World Bank Art Program in conjunction with the IDB and the Organization of American States (OAS) to showcase Latin American and Caribbean art at D.C. venues throughout 2011.

In fact, “Contemporary Jamaican Artists” dovetails a previous exhibition at the OAS Art Museum of the Americas called “”Wrestling with the Image: Caribbean Interventions,” which included large contributions from Jamaican artists, some of whom are part of the IDB show (also see “Consequential Caribbean” review in the March 2011 issue of The Washington Diplomat).

“Change is a critical thing in all Latin American art, and it includes the use of technology,” said IDB Cultural Center Director Ángel. “Many artists embraced technology early, others came to it late. Jamaican artists — because of the unique geographical position of Jamaica, an island surrounded by other islands with different cultural references — came particularly late to this. There were issues of identity here, unique to Jamaica and Jamaican art, as you can see in this exhibition.”

Also in this exhibit, tradition, “the narrative element in Jamaican art, has always been strong,” Ángel pointed out — yet now it collides with contemporary ideas and technology, and the mix is both fervent and fruitful.

Here, you find artists dealing with the metaphorical and physical repercussions of this collision, such as Charles Campbell’s entrancing meditations based on the region’s history of slavery and emancipation, to Gerard Hanson’s provocatively titled portraits using archival inkjet that ponder the complex diversity and displacement that still defines Jamaican society.

What’s impressive is that even among this relatively small number of works — 20 by a total of nine artists — there is a remarkable range of big ideas, larger metaphors, transcendent feelings, and a narrative that examines the past, present and future of an island with a richly distinct identity but one that’s also been shaped by many overlapping forces. Slavery, for example, is a residual issue not only in Jamaica but throughout the Caribbean, as opposed to South America, where colonialism wore a different face.

Hanson, a British-born artist who resides in Kingston, creates works that almost seem to scream Jamaica, with their redolent colors, urban edge and musical energy, yet the artist also wants his work to highlight the overlap of cultural, national and racial identities and the subsequent feelings of being “out of place” in the very place in which you live.

Like Hanson, Ebony G. Patterson seems inspired by Jamaica’s urban backdrops, although she focuses her attention on the fashionable trends within Jamaican dance hall culture and specifically the machismo that permeates notions of masculine and feminine roles in society. The in-your-face result is a digital collage of big gangsta bling that challenges traditional concepts of beauty in popular black culture.

Marlon James takes a more dressed-down approach with his portrait subjects, allowing them to relax naturally before his camera so “these people unveil in front of my lens,” as he puts it — which they do in striking real-life photographs that capture the subjects’ outsize personalities.

More enigmatic is Campbell’s “Actor Boy” series, inspired, according to the artist, by the circular mandala form found in Hindu, Buddhist and other religions. As mesmerizing as Campbell’s circular renderings are, it’s his large black-and-white “Bagasse Cycle” depicting the leftovers of sugar cane that speaks to the island’s economic lifeblood that was once tended by slaves.

A very different kind of circle is depicted in Phillip Thomas’s “Carousel,” a moody, somewhat traditional work with its indistinct riders, straining horses and muted colors that become more disquieting the more you gaze at them, an eerie ride populated by what the artist calls “cultural reliquaries, artifacts and social curiosities.”

There are curious connections everywhere — and a multidimensional, multicultural undercurrent found not only in the materials, but the artists themselves. Margaret Chen, a Chinese-Jamaican, wrought an oval-shaped construction out of X-rays and wood strips called “Cross Section of Arc” that evokes a sea-faring canoe, a sleek but fragile vessel from the past made of decidedly new materials.

Laura Facey’s “Their Spirits Gone Before Them” is a different kind of canoe, this one made of cottonwood, that explores similar themes but in a more visceral way. Inside this canoe are 1,357 resin figures made of dried sugarcane, meant to echo the words of Marcus Garvey as sung by Bob Marley in his “Redemption Song” — “None but ourselves can free our mind.”

Michael Parchment’s “From Slavery to Freedom” is a more colorful, somewhat more hopeful vision of looking beyond the past but still preserving it, while Oneika Russell uses video animations to muse about her postcolonial experience and her own journey from Jamaica to Japan.

In these works, you see what separates Jamaica from other Caribbean islands, but there’s also the shared oppression that blankets the region’s history like a ghostly layer. The art though goes beyond yesterday’s colonialism to offer a thought-provoking, nuanced look at today’s Jamaica — which itself goes beyond the tired old associations of reggae and Rastafarianism and sunny smiles. It’s contemporary, complicated, challenging, unpredictable and beautifully uninhibited — and yes, it’s about change.