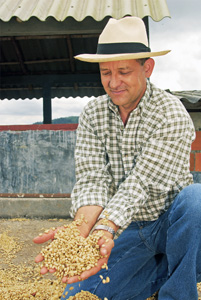 PEREIRA, Colombia — Jorge Iván Valencia Londoño drives up a winding, bumpy mountain road so steep that it seems his 1954 Willys jeep might roll backward at any moment. For the group of American visitors he’s just picked up, it’s five minutes of exhilarating terror. But the pristine view from the mountaintop is well worth the effort.

Jorge Iván Valencia Londoño, who has a 3.2-hectare farm in the mountains outside Pereira, Colombia, inspects dried coffee beans. Valencia will demonstrate the art of coffee cultivation at the 2011 Smithsonian Folklife Festival in Washington this summer.

From this vantage point 1,600 meters above sea level, lush green coffee fields stretch in nearly every direction — even though the city of Pereira is only seven kilometers away. It’s a spectacularly beautiful vista that the 49-year-old coffee farmer wakes up to at 5 a.m. every day.

“It’s quiet here. We hear only the roosters and the birds,” said Valencia, whose tiny finca, or plantation, barely covers three hectares. He’s typical of Colombia’s 500,000 or so coffee farmers, 92 percent of whose plantations measure five hectares or less.

“My grandfather was a farmer, and this finca was passed down from my father,” said Valencia, who produces around 5,000 kilograms of coffee beans for export every year, mainly to the United States, Germany and Japan. “When my father died five years ago, my three brothers and I said either we sell the place or one of us takes it over. I took it over because I was the one who liked coffee the most.”

Valencia is so passionate about quality coffee that he was one of 100 lucky Colombians chosen to represent this South American country at the Smithsonian’s 2011 Folklife Festival, which runs for 10 days on June 30 to July 4 and July 7 to 11.

The popular annual event, which takes place on the National Mall and has been around since 1967, has in recent years showcased international offerings from Senegal, Mexico, Wales, Oman, Haiti, Mali and Bhutan, in addition to thematic programming such as “Appalachia: Heritage and Harmony,” and “Nuestra Música: Latino Chicago.” Since its inception, it has brought more than 23,000 musicians, artists, performers, craftspeople, workers, cooks, storytellers, and others to the Mall to demonstrate their community-based traditions.

Now in its 45th year, the festival — free to the public — is expected to attract 1.2 million visitors. In addition to Colombia, the 2011 festival will highlight the work of the Peace Corps on its 50th anniversary, as well as America’s long musical tradition of rhythm and blues.

“We have beautiful geography, and that is now being validated by the fact that the Smithsonian picked Colombia as a showcase country for this year’s Folklife Festival,” said Colombia’s ambassador to the United States, Gabriel Silva. “It’s a very important cultural event, and very few countries have been selected for this.”

Adds Olivia Cadaval, curator of the Smithsonian’s Center for Folklife and Cultural Heritage: “Our center has had a long relationship with Colombia. We thought it would be really interesting to feature grassroots culture, the real Colombia so many people don’t know about.”

Cadaval, who’s spent much of the past month helping to set up the festival’s elaborate pavilions and exhibits, says the $1 million event “is a perfect opportunity for people to demonstrate the living traditions of Colombia.”

One of those people is Esther Otero Llanos, one of 11 brothers and sisters who make macetas in a big house in the historic San Antonio neighborhood of Cali, Colombia’s third-largest city. The maceta is a traditional “candy tree” made from white sugar mass and decorated with Colombian flags, brightly colored ribbons, figurines and other adornments. A reminder of the region’s historic links to the sugarcane industry, these distinctive souvenirs are traditionally given to local children every year on June 29, the annual Fiesta de Maceta.

“I remember my mother making these since I was 4 years old,” said Otero, 61, who like her siblings was born in this house. The family produces 40 or 50 macetas per day in the weeks and months leading up to the annual celebration, and sells them for 15,000 pesos (around $8.50) each. 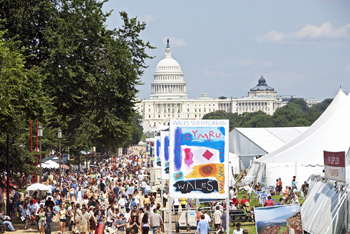 Now in its 45th year, the Smithsonian Folklife Festival on the National Mall spotlights cultures from around the world, such as Wales, above, in 2009.

Joining Esther Otero and her brother Jaime at the 2011 Folklife Festival will be Zully Murillo, a well-known singer from the northwestern department of Chocó, near Colombia’s border with Panama. The 67-year-old musician — who dances and sways with the energy of a woman one-third her age — sings religious Catholic songs with a band that uses traditional instruments such as the chirimía (a type of oboe), bombardiño (tuba) and redoblante (drum).

“I studied math and physics in the university, but I was always interested in music and my African roots,” said Murillo, interviewed at her Cali home. “My participation in the festival was accidental. The person who was supposed to go couldn’t make it. But this is important for me because I know about our customs and I want to show them to the world.”

Luz Aydé Moncayo Giraldo is also fiercely proud of her customs. An award-winning salsa dancer and instructor, she runs the Sondeluz dance academy in downtown Cali. Moncayo, 43, has been dancing salsa since her fifth birthday and has been a professional instructor for the last 25 years.

“I’m a systems engineer, but I noticed long ago that my passion was salsa,” she told The Diplomat during a quick break in between children’s dance classes. “In Cali, it’s very normal and natural, and kids — from a very young age — have it in their blood to dance salsa. For us, salsa is everything.”

Moncayo will be demonstrating complicated dance moves as well as giving free salsa lessons during the Folklife Festival. Here in Cali, she charges foreigners 30,000 pesos ($18) per hour for such classes.

When she was only 17, the Colombian government named Moncayo a “cultural ambassador” and sent her to New York, Chicago, Los Angeles and Miami to show off her dancing skills.

“I was the first Colombian woman invited to Cuba to teach the Cubans how to dance salsa caleña,” she noted proudly. “In 10 hours, I can teach any foreigner how to dance salsa. I do everything with lots of amor.”

Like the maceta candy-trees made by the Otero clan, salsa music is not only a symbol of Cali. It’s actually decreed by law as “national patrimony.”

“Even though salsa as such didn’t originate in Cali, our style is original,” said Moncayo, who gives dance lessons to imprisoned juvenile delinquents in her free time. “But reggaetón and other types of music are replacing salsa here. That’s what the young people prefer, reggaetón. So my intention is to preserve our heritage.”

In a way, that’s what Valencia is trying to do, too.

The lifelong coffee farmer from Pereira, who’s never traveled to the United States before, will be on hand at the Folklife Festival to help his new American friends learn the entire coffee process —from cultivation to picking to preparation.

Showing visitors around his little finca high up in the mountains, Valencia explained that 200 or so area producers have recently banded together to create a specialty coffee brand that will command higher prices overseas.

“If you buy coffee in the United States from my farm, it will say exactly where the coffee was grown,” he said. Indeed, Valencia’s coffee isn’t organic, but it is traceable — an ecologically responsible trend increasingly associated with fine gourmet products like wine, cheese and even tequila.

At the same time, a dramatic rebound in world coffee prices — from 40 cents a pound a few years ago to just over $3 per pound today — has allowed small farmers like himself to invest in quality and disease-resistant strains of coffee varieties.

“We are recovering from hard times and taking advantage of the high prices to revive our plantations,” said Valencia, who employs seven pickers during harvest time. “At the moment, the coffee business is excellent.”

The entire program is also geared to celebrate the rich bio-cultural diversity of Colombia and explore how different elements of the country’s culture are inextricably connected to their distinctive environments. Other traditions to be highlighted at the festival include gold-mining activities from the Río Atrato to the Pacific rainforest, such as panning, work songs, filigree jewelry-making and gold trading; basket and clothing weaving that utilizes the diverse fibers and reeds found in the Andean savannah; as well as leather crafts from the Orinoco plains that exemplify the ranching lifestyle.