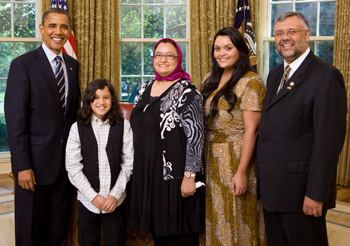 A single word, ubuntu, is a cherished African mantra with multilayered meanings, generally referring to interconnectedness, community and humanity. It’s a philosophy that can be applied to personal relationships, politics or economics, and although difficult to define concretely, it’s clear that Rosieda Shabodien, wife South African Ambassador Ebrahim Rasool, has it in abundance.

“Your humanity is bound to my humanity,” Rosieda told The Washington Diplomat. “If I treat you badly, actually I am treating myself badly. Ubuntu is an old African concept but [former President Nelson] Mandela and other South African leaders have brought it forward in a new way.”

Rosieda Shabodien, center, joins her husband, South African Ambassador Ebrahim Rasool, right, as he presents his credentials last summer to President Obama, along with their two children, Tanwir-Sadr, a sixth-grader at Washington Waldorf School, second from left, and Tahrir, a first-year pre-med student at Howard University.

Rosieda is the mother of two children, Tahrir, a first-year pre-med student at Howard University, and 11-year-old Tanwir-Sadr, a rising sixth-grader at Washington Waldorf School. She grew up in the working-class townships in Cape Flats, just outside Cape Town, and from a young age both experienced and questioned the injustice of oppression. Her early encounters with apartheid put her on a lifelong path of human rights activism, not unlike her husband, who held leadership roles in the United Democratic Front (UDF) and African National Congress (ANC) and has been involved in Islamic and interfaith initiatives over the years.

A practicing Muslim who can often be seen wearing a headscarf, Rosieda became active in the anti-apartheid movement in the late 1980s and over the years has participated in groups such as Call of Islam and the World Conference on Religion and Peace, working to shed light not only racial discrimination but religious discrimination as well (less than 2 percent of South Africa’s population is Muslim).

The couple’s activism in fact forced them to delay their marriage plans — a “taste,” as Rosieda says, of what it was like living under apartheid rule. The wedding date had been set for Dec. 16, 1987, but Ebrahim was jailed by the apartheid regime on June 6, 1987. After he was released a year later, the two eventually got married on Dec. 4, 1988. Even the wedding though had political overtones. “When it finally happened, ‘our big day,’ our wedding reception, become a big political mass rally with 1,500 people attending,” Rosieda recalled. “So it was a celebration, anti-apartheid speeches, political rally and police vehicles hovering around the reception hall all in one. Yes, I am still dreaming of my small garden wedding,” she mused. “Maybe our 25th wedding anniversary celebration can be in a garden.”

Today of course, South Africa is a completely different place than it was when Rosieda and Ebrahim wed. Although the country still grapples with major social problems such as poverty and crime, it has bravely moved past its legacy of apartheid with a reconciliation movement — underpinned by a national sense of ubuntu — that in many ways remains unprecedented in the modern world.

“What else can we bring to the world? This is the most important concept for South Africa and has become part of our ‘branding.’ With ubuntu, you can see your soul,” Rosieda said. “You have the responsibility and dignity [to be a citizen of the world]. Our impressions of people are not in terms of color, religion, ideals, culture, way of life, but of their goodness and understanding that the world is one place.”

She also notes that her own eclectic background embodies the diversity of her nation.

“In my case, my very persona challenges myths about South Africa. As a scarf-wearing, black South African Muslim, of Malay slave origin, I reflect the multicultural and religious diversity of South Africa, while also asserting its gender equality. I defy the neat boxes that some have worked out for people like me. So when I encounter Islamophobia, I regard it as requiring the same resilient response that we displayed toward those who categorized us and discriminated against us during apartheid,” Rosieda explained. “They will not define me, but I have the responsibility to work for a day when people can look at each other’s soul rather than race, gender, ethnicity or religion…. [I] cannot be judged by what is on my head, but by what is in my head and soul.”

And this diplomatic wife has a head and soul for working toward the common good, with an impressive resume to boot. Rosieda began helping others when she started a career in physiotherapy, later specializing in community-based rehabilitation and teaching on the subject at the University of the Western Cape. In 1990, Rosieda became an active member of Eco Programme, a leading South African environmental nongovernmental organization that focuses on sustainable livelihoods and shifting the green debate away from an exclusively conservationists’ agenda and incorporating it into the black agenda.

Throughout her adult life, she has also been a champion of women’s rights, in particular emphasizing the need for gender equality within patriarchal religious institutions and traditions. “I especially want to connect with women’s organizations here [in D.C.],” noted Rosieda, who has been involved in some of the most important women’s organizations in South Africa.

In 1997, she became director of the Gender Advocacy Programme or GAP, one of the pre-eminent gender and women’s rights NGOs in South Africa at the time. Rosieda then became director of the Manenberg People’s Centre to aid one of the most poverty-stricken townships of the Western Cape. During her innovative tenure at Manenberg, she instituted food gardens, promoted the greening of the center, and pushed skills-building programs for the unemployed. She was also one of the founders of the Women’s Leadership Collective, a forum of female NGO directors, as well as the South African Women’s Museum initiative, whose objective was to ensure that South Africans remember the crucial role that women played in the anti-apartheid struggle. 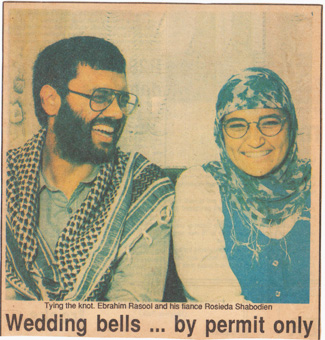 A newspaper clipping announces the wedding of Rosieda Shabodien and Ebrahim Rasool, which was delayed when Rasool, a prominent member of the United Democratic Front and African National Congress, was jailed for a year in 1987 while protesting South Africa’s apartheid regime.

In May 2007, South African President Thabo Mbeki appointed her to head the Commission for Gender Equality, a constitutional gender equity watchdog institution in South Africa. There, she continued her work to promote gender justice in the religious, traditional and cultural spheres and to ensure the advancement of gender-sensitive legislation — leaving the post when her husband was called to Washington.

Rosieda not only appreciates and lives the ethic of ubuntu that has come to be closely associated with post-apartheid South Africa, but she cherishes the opportunity to share her country’s core philosophy with other nations and people, especially in Washington.

“That’s my role here as I see it,” said this well-educated, eloquent wife and mother. “I want to help all Americans and everyone else I meet here to not only understand the concept of ubuntu, but to understand how we have all been able to follow Mandela’s great example of forgiveness after 27 years in jail during apartheid. Our job here is to spread that peaceful message and to tout South Africa’s beauty in its people and in nature.”

“Our flag tells the story,” she pointed out. “It is the only flag in the world that has six colors, just like our anthem contains the five major languages in our country. Both our flag and our anthem, both 16 years old now, speak about the great South African desire for inclusion and, therefore, all languages, religions, flags and people reflect the diversity — the whole tapestry — that is South Africa.”

The flag’s design of red, white, blue, black, green and yellow is an amalgamation of the old apartheid colors and the colors of the liberation parties. The “Y” shape reflects the convergence of diverse elements within South African society, creating a new road ahead of unity. It not only signifies South Africa’s many people coming together, but coming together in peace.

“My husband and I are here to encourage and entice as many Americans and diplomatic guests as possible to not only understand South Africa and our unique history but to consider investing and coming to our country to experience all that is South Africa,” said Rosieda as we toured the first floor of South Africa’s new residence in D.C.’s Spring Valley neighborhood.

“The ambassador’s residence has become a vital part of the armory to promote our message,” she explained. “Our residence reflects the story of our country, with an array of South African art, cuisine, culture and hospitality. Guests, having heard the South African story, know that it’s a sad history but we tell them about our great future, especially with ubuntu triumphing over evil.”

Rosieda reports that as she and her husband approach the completion of their first year in Washington, it’s been a very busy — and productive — time, mostly due, she says, to “how driven my husband is.”

“Ebrahim hit the tarmac running. He started as he got off the plane and he hasn’t stopped since,” she said. “His job was clear: to represent South Africa in the finest way possible and to ensure that South Africa achieves its economic and social development goals. He is a very hard worker and passionate about the transformation in our country; his work has been on trade, tourism and investment, and promoting the South African story of development and transformation and debunking the myths about Africa.”

Ebrahim Rasool’s government experience includes leading roles in health, welfare, finance and economic development. He most recently served as a member of Parliament in the National Assembly, special advisor to the State President of the Republic of South Africa, and as premier, or governor, of the Western Cape Province, where he was instrumental in attracting foreign investment into the province worth approximately $1 billion and making significant strides toward the U.N. Millennium Development Goals.

After they arrived in Washington last summer, Rosieda set up the household, made sure their children were settled into their schools, and helped her husband in his official diplomatic functions.

When the family does have time together, they love to take picnics in Rock Creek Park or on the National Mall. “Your museums, your city parks with the great sculptures are lovely and I can’t wait to see all your art galleries too, but most of all the whole family just likes to take a picnic and discover a whole new area,” Rosieda said.

Now, she is ready to “walk lightly because I am a diplomatic guest in your country, but resolutely because I have a role to play, side by side my husband … to export South Africa’s story of a successful and peaceful transition living in diversity and practicing ubuntu.

“We walk in the United States with wide-angle lenses,” she continued. “We do not want to miss an opportunity to learn from your society of managing democracy and diversity in the context of different races, genders, shifting migration and many religions. Then there is the culture of politics and politicians in the context of elections, budgets and recession, and, of course, your educational system and memorialization.

“I love how you do so much to keep the memories alive of your leaders and your history with all your great monuments in Washington…. Perhaps we can do more of this at home, monuments to remember our heroes,” she mused.

“The challenge is always not to draw conclusions or make judgments, but simply to synthesize this information and learn what is relevant for South Africa and share with you the South African experience,” Rosieda observed. “You can learn from us and we, from you.”