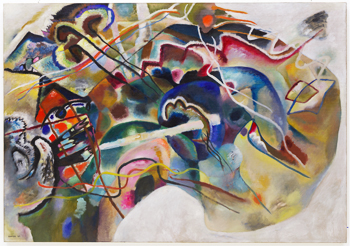 The Phillips Collection consistently organizes some of the most visually arresting and intellectually challenging art exhibitions in Washington, and two of its latest — “Kandinsky and the Harmony of Silence: Painting with White Border” and “Stella Sounds: The Scarlatti K Series” — continue that tradition.

After visiting his native Moscow in 1912, Kandinsky aimed to turn what he called his “extremely powerful expressions” of the Russian city into a painting that encapsulated Moscow’s musical sounds and his overall impressions. The Kandinsky exhibition effectively showcases the artist’s commitment to this effort, revealing a slew of drawings, watercolors and oil studies completed over a period of five months that culminated in the renowned “Painting with White Border.”

The exhibition includes about 10 of Kandinsky’s preparatory studies for the painting, which was complete in 1913. These rough drafts — composed in oil, watercolor, ink and pencil — show us Kandinsky’s thought processes as he worked out his ideas for “White Border,” illustrating the pronounced concentric movement and kinetic energy found in this masterpiece of abstract art. As in the final version, the preparatory studies require viewers’ eyes to move with the lines, forcing us to actually participate in the painting.

The two most consistent motifs seen in the preparatory studies and on the final canvas are a troika (a three-horse sled) and St. George, both of which were closely associated with Russia. A 1913 essay that Kandinsky wrote about “Painting with White Border” explains how he distilled the troika motif into an “arrangement of three lines, curve at the top, which with different variations run parallel to each other.”

Kandinsky went on to say that the lines represented the lines of the back of the three horses in a Russian troika — and the three-pronged image is evident in every preparatory study for the painting. According to the exhibition’s wall text, Kandinsky’s painting is also believed to include a representation of the legend of St. George and the dragon, a theme he first explored as a pencil drawing in 1907. The reference is evident in “Painting with White Borders” in three curved lines on the right of the canvas and a protruding lance-like image aimed at seemingly living images on the far left.

The Phillips exhibition also features an illuminating, detailed examination of the latest technical research on the painting and its related studies. Experts from the Phillips and the Solomon R. Guggenheim Museum in New York examined “Sketch I for Painting with White Border,” owned by the Phillips, and the final product, owned by the Guggenheim, using techniques ranging from infrared imaging to chemical analysis. In the process of comparing brushwork, media and the development of the compositions, conservators uncovered a painting below the surface of “Sketch I.” It’s a representational landscape attributed to German artist Gabriele Münter, who was Kandinsky’s girlfriend and one-time student. This is just one in a series of revelations viewers will enjoy while spending time with this hyper-focused exhibition. 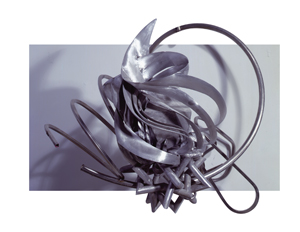 Having viewed Kandinsky’s work, viewers will immediately recognize similarities in the sculpture of Frank Stella, the American painter and printmaker who is a significant figure in minimalism and abstraction. The Phillips exhibition showcases eight sculptures from his “Scarlatti” series, inspired by 18th-century Italian composer Domenico Scarlatti’s harpsichord sonatas and the writings of 20th-century American musicologist Ralph Kirkpatrick. The exhibition serves as a showcase not only for Stella’s talent, but also the similarities between Stella’s forms and the work of Kandinsky, whom Stella has referred to as “one of the defining creators of 20th-century abstraction.”

Stella’s “K3” — all silver coil and edges — brings to mind something dangerous or industrial while emulating the sinewy lines of Kandinsky’s work in the next room. Meanwhile, Stella’s “K5” is hypermodern art juxtaposed with the abstractionism founder’s art in the next room. Visitors can literally gaze upon “K5” and then lift their eyes to see Kandinsky’s “Sketch I for Painting with White Border” in the next gallery. Stella’s work takes inspiration from Kandinsky’s two-dimensional idea and pulls it out into the round. The shadows of Stella’s sculptures cast upon the Phillips Collection are especially revealing as the simple lines of the shadows perfectly emulate the motion found on Kandinsky’s canvas from decades earlier.

“They combine sculpture, painting and even drawing, since Stella sees the steel armatures as a form of drawing that serves to orient the polychrome sculpture in space,” she explained. “There’s color, movement and abstraction.”

And no small amount of whimsy. During a Sunday afternoon viewing in June, a visitor remarked on the playful nature and aesthetic appeal of Stella’s vibrant, kinetic sculptures.

“These would make good earrings,” she said.

Kandinsky and the Harmony of Silence: Painting with White Border
and Stella Sounds: The Scarlatti K Series