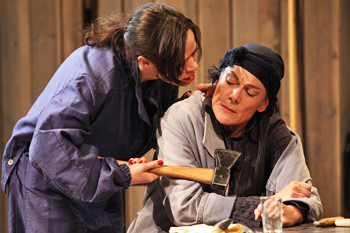 Theater goers planning to see Sofi Oksanen’s literary sensation “Purge” performed by Scena Theatre should take director Robert McNamara’s warning that “the play isn’t for the faint of heart” into sizeable consideration. Then take two aspirin and call him in the morning.

“Purge,” a political terror, isn’t your usual summer theater fare. Rather than an evening of wistful romance or Shakespearean comedy, Washington audiences will be exposed to a painful but valuable history lesson — one that wouldn’t normally get much attention in the city’s self-absorbed whirlwind of inside-the-Beltway political preoccupations.

For Scena, whose mission is to “bring the best international theater to D.C. and stimulate cultural exchange between local and global artists,” it is most apropos to stage the regional premiere of Oksanen’s handiwork. The author and playwright, who is half Finnish and half Estonian, turned the play “Puhdistus (Purge)” into a best-selling novel, which won her the Finlandia Prize, Runeberg Prize and the Nordic Council Literature Prize. The play debuted in the United States at La MaMa Theatre in New York City in February and is playing in D.C. with the support of the Finnish and Estonian embassies.

The feminist political story mines Estonia’s turbulent, not-so-distant past, before the Baltic country, ravaged by World War II and German and Soviet occupations, morphed into its current status as a democratic member of the European Union and one of the most tech-savvy nations in the world. Far from today’s ubiquitous backdrop of cell phones and Skype (an Estonian invention), the play chronicles the lives of two desperate and hardened women whose paths cross in the 1950s, during the country’s second Soviet occupation, when mass deportations of Estonians opposing Soviet ideology or deemed to have corroborated with the Germans were shipped off to Siberia. The women meet again in the early 1990s, after the Soviet Union’s collapse, when countless numbers of women and girls became victims of sex trafficking.

The plot unfolds in the Estonian home of a Aliide, whom we see in both her younger and older forms and who long ago traded honesty and family loyalty for ill-gotten freedom while posing as a Soviet loyalist. Aliide’s life of estranged solitude collides with the past she’s fought hard to forget, in the form of young Zara, an escaped Russian sex slave. In Zara’s effort to free herself, she also harbors incriminating secrets. Both women depict the psychological hell that comes from internalizing external abuse and oppression. Although it’s difficult to represent the plight of an entire country and its people in the embodiment of two characters, you wouldn’t think that when captivated by these two women on stage.

The play is powerful and harrowingly realistic because it forces its audience to experience the agony of these women — a shared sense of pain that’s heightened in this production, housed in the low-ceiling, darkened H Street Playhouse, which has an underground, subversive quality. The air conditioning is either nonexistent or not working, which prevents detached comfort on a steamy D.C. night, and the simple, intimate stage bleeds into the audience, which imposes a shared nightmare with the characters. 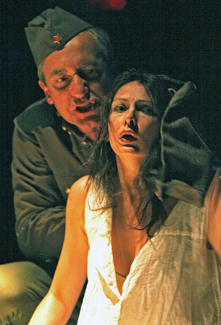 Colleen Delany, a regular in Scena’s casts who’s known for her work at the Shakespeare Theatre, is almost unrecognizable here in her transformation as the marginal Zara. Her compelling portrayal of an extreme victim-turned-outlaw who demands redemption is admirable. Matching her intensity is Kerry Waters, a founding member of Scena, whose solid performance of the elder Aliide reaps the benefit of having worked with director McNamara since 1987. Waters foreshadows suspense with resonant, articulate intonation that makes it impossible not to hang on her every word. The contentious interaction between old Aliide and her younger self, portrayed by Irina Koval, highlights the character’s slow descent into madness with no one else to talk to other than her own self, who exhibits a split personality.

If a criticism were to be made of this production, it would be that the director is heavy-handed with brutal material that needs no exaggeration. Less than sublime are the male goons — whether Soviet or Russian — who mean to do harm to these women. The men fall into violent KGB-like stereotypes that interrupt the audience’s trance that the female actors have worked hard to secure.

“Purge” means to evacuate, clear of guilt, and to free from moral defilement. Through this play, Oksanen purges both her characters and her audience on personal and political levels, and both go through a sort of cathartic transformation. Aliide and Zara were emptied of their political and personal freedoms by outside forces, and in reaction, committed ethical and moral wrongs from which they try to cleanse themselves. Meanwhile, society committed horrific crimes of rape and torture in the Baltics, and Oksanen points out that just as the oppressors tried to cover it up, so did the press in glazing over these victims in the news. So just as the script attempts to purge its characters of guilt, the author tries to do the same with history; to rewrite and reconsider it. It’s a gut-wrenching way to re-examine Estonia’s painful history, but this play makes the emotional journey both revealing and worthwhile.