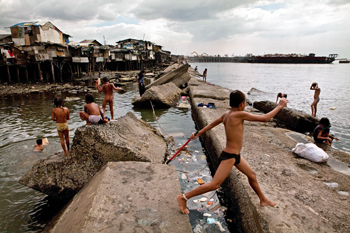 Sergi Camara considers himself a “photographer first,” but the Spanish artist ties that in with another passion: activism — specifically, environmentalism.

One photo from his collective depicts mountain-size heaps of recycled computers and boxy old printers stacked under a clear blue sky. In another, Ghanaians crouch over a ground littered with tangled wires. They lace their hands through the cords, scraping off the copper from the wormlike vines in hopes of selling it for a profit.

The exhibit “E • CO” turns the lens on environmental issues from river pollution to biodiversity loss to the impact of nuclear power — bringing complex problems to vivid life. The stinging visual essay is the work of 20 photo collectives around the world from Peru and Costa Rica to France and Germany.

The featured photographs flaunt a wide spectrum of colors and innovative techniques, but the strength of the exhibit lies in its internationalism. Like a thunderous choir, the pictures sing — at times even scream — a compelling narrative that’s reinforced by the fact that they hail from all over the world yet attest to a universal phenomenon: The environment is telling us something.

And each image speaks volumes about what it’s trying to tell us.

“I wanted to portray how men create garbage,” the dark-haired Camara explained through a translator of his photographs depicting electronic waste. “The electronic problem is an environmental theme that hasn’t been explored. It’s every new iPhone, iPad and upgrade — you throw the old one away for the new version.”

Standing before his photos at the Katzen, Camara said Europe — at this rate — will double its electronic garbage by 2020. But Europeans, like most Western nations, won’t be the ones who have to deal with the garbage — they’ll dump it off onto the developing world, he said.

According to Camara, Europeans must pay 3.5 euro to recycle old computers, or they can donate the electronics to places like Ghana and Pakistan for 1.5 euro. But there’s a catch: Only one in 10 of the discarded items still functions, so the other nine end up in vast junk piles, the electronic debris and toxins contaminating the landscape and the people, Camara explained. 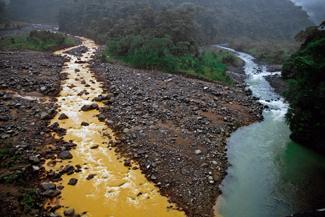 The Nòmada collective in Costa Rica document a range of environmental issues including river pollution.

“They donate the electronics as if they were a gift, but the truth is, it hurts the people,” he said.

The photos of high-tech trash reveal just one story. Another group of eight pictures titled “La Parede” (“the wall” in Portuguese) questions a new Brazilian initiative that separates the rainforest from a neighboring slum with a three-meter-high, 350-meter-long wall in Rio de Janeiro.

An aerial shot captures the disheveled makeshift homes and the surrounding forest, as the massive gray concrete barrier snakes and zigzags up a mountain. On one side of the wall, the thick forest grows wild, shielded from encroaching human development. But on the other side, people are segregated into an enclave of housing projects perched on the hillside, leaving little if any room for vegetation or expansion.

Although the Brazilian government calls the wall an “eco-barrier,” many just see it as a form of separation apartheid. “A wall is essentially an end to diplomacy, the failure of dialogue,” reads the display beside the photographs.

In a similar vein, another collective from the United Kingdom shot acres upon acres of slums and slum dwellers. In a more visually surreal offering, stuffed ferrets, bobcats and other animals sit frozen as home decorations in a series of photos from a Portuguese collection that decries mankind’s treatment of animals and the subsequent loss of biodiversity. A collective from Mexico snapped pictures of polluted water for a photo essay on unsanitary drinking and irrigation water.

“It’s a big problem, and it’s the same problem that’s happening in all parts of the world,” said exhibit curator Claudi Carreras of Spain.

He started the environmental-themed exhibition after traveling in Latin America for three years and seeing how photographers were working to document environmental degradation in their midst.

Carreras opened the exhibit in Madrid last year in conjunction with “E • CO 2010,” a meeting organized by the Ministry of Culture of Spain to highlight professional photographers’ challenges and needs in the rapidly evolving digital media landscape. Since then, the photos have been displayed in Brazil and, with sponsorship from the Embassy of Spain, are stopping in Washington, D.C., before continuing to Miami and Chicago.

“It is not just the case that more artists are turning their attention to the environmental challenges we are facing today,” Rasmussen said. “Everyone is more focused on climate change and the sustainability of our food, water, air and energy. Our survival depends on our ability to focus.”