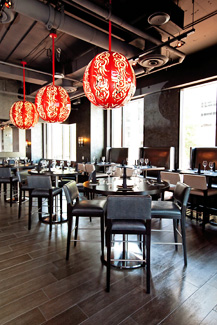 Washington’s Penn Quarter neighborhood continues to evolve as one of the area’s premier dining destinations with the opening of 901 Restaurant and Bar. Located at 9th and I Streets across from the Washington Convention Center, 901 is the first upscale venue for developer David von Storch, owner and president of Urban Adventure Companies Inc., the group responsible for the Capitol City Brewing Company as well as an expanding D.C.-based Vida Fitness.

Through his latest restaurant, von Storch aims to offer diners the kind of high-end experience that typifies his other ventures. To achieve the look, he turned to Stoneking/ von Storch Architects, his brother Stephen’s Virginia-based company, as well as Hallock Design Group out of Miami to create an industrial chic space that is stunningly eye-catching. A black lacquer-exposed ceiling and dark distressed wood flooring give the 7,500-square-foot restaurant a sleek yet open feel, punctuated by neutral colors and flashes of bright red. Platinum leather banquette and cream leather upholstery, a whimsically tiled bar area, striking red ball light fixtures, a mid-wall fireplace in the lounge, and a cascade of clear glass bubbles suspended over the entrance foyer come together in an eclectic and exciting mélange.

Eclecticism characterizes the approach that von Storch has taken with his menu as well. Not constrained by any particular culinary style, although it hones mostly to American flavors, 901 offers dishes that can satisfy almost any taste. To assist with his foray into upper-end dining, von Storch brought in Culinary Institute of America-trained Thomas Hall to serve as executive chef at 901. Previously with TenPenh (which unfortunately just closed its doors after more than a decade), Hall is no stranger to the multilayered concept that underlies von Storch’s vision for the restaurant.

Their approach structures the meals in two different ways that make 901 neither a distinctly tapas nor full-plate restaurant, but rather a combination of both. Half the menu constitutes of small plates, sharing dishes, salads and sides. And unlike many tapas places that say each sharing plate is meant for four people, 901 actually means it. Tidy little (but not too little) cheeseburger sliders come four to a plate and are rich and satisfying, with smoked cheddar cheese, spicy aioli and sweet potato buns. Make sure to request them medium rare as otherwise they may be a bit overdone for some. The spinach crisps, also four to a plate, featuring chili pepper aioli and pico de gallo are flavorful and have an interestingly coarse texture. Two come breaded and fried, while the other two are naked. Both ways are very good. The lump crab bruschetta is an unusual and decadent choice, with its mixture of crab, roasted bell pepper and cream cheese served on slices of sundried tomato bread. As promised, it arrives as four nice-size pieces. Finally, the tuna tartar is piled in a stack over avocado mousse atop a crispy wonton skin and dressed lightly with Japanese aioli. The dish is quite mild, whereas other dishes trend toward the salty or spicy side.

On the other side of the menu, 901 offers a variety of meat, seafood, pasta dishes and sandwiches tinged with multicultural influences. In some cases, chef Hall clearly hews to a specific culinary tradition. Signs of his previous work at TenPenh, for example, show up in the Thai lettuce wrap and the fried tuna roll sharing plates, as well as the lemon grass seafood udon pasta dish. Also on the pasta side, the bistro shrimp picatta with capellini noodles, parsley, white wine and lemon sauce looks directly to Italy for its inspiration.

Other dishes borrow ingredients from across cuisines. The jumbo lump crab cake, served with fried green tomatoes, chipotle remoulade and poblano corn relish, echoes traditions in the Deep South but incorporates Southwestern touches as well. The roasted chicken is a classic comfort dish, as is the mac and cheese fritter that accompanies it, but in this version, the pairing with wild mushroom ragout and charred lemon, along with the treatment of the mac and cheese, puts the chicken in a whole other category. Another superb dish is the scallops — pan-seared and served with crispy polenta cake, citrus brown butter sauce and apple salad, forming a perfect amalgam that demonstrates Hall’s ability to seamlessly blend styles while creating a thoroughly satisfying dish. 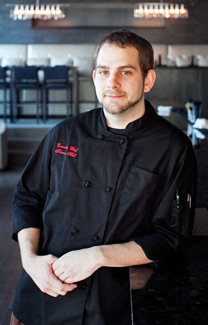 One might think that with his background in the fitness industry, von Storch might be tempted to forgo, or at least minimize, desserts at 901. Thankfully he didn’t. Pastry chef Ron Johnson interprets several traditional favorites in delightfully inventive ways. Bread pudding at 901 is cobbled together using chopped doughnuts, while the chocolate crème brulee is flavored with chipotle chilies. The cheesecake is made of three cheeses, including goat cheese, which gives it a new dimension that is effectively set off with a tart sour cherry compote. The strawberry shortcake departs from traditional versions by bringing out distinct orange notes in the scone, chantilly and the Citronge. For those unable to pick one dessert, 901 has also put together a sampler plate of mini versions of four of the five choices. (Be aware, however, that some of the flourishes that make each larger dessert so unique are missing in their smaller presentations.)

In an interesting departure from other recently opened fine dining venues in the area, von Storch’s has wisely capitalized on his Capitol City brewery connection to build a beer-centered beverage program at 901. He turned to Mike McCarthy, the director of brewing operations at Capitol City, who has created several excellent craft keg brews that are exclusive to 901, including a delightful India Pale Ale that is rich and hoppy (but not overly so) and complements other regional craft varieties. 901 also offers a substantial and varied wine list, with an emphasis on domestically produced varieties, a number of which are available by the glass. The ubiquitous (though short by current standards) cocktail list offers several fun concoctions. In particular, the cucumber-basil mojito is light and fresh, with an interesting depth imparted by the dark rum, while the Georgia peach tea is a sweet remembrance of spring breaks gone by.

Given the success of his other ventures, it’s clear that von Storch understands the critical importance of customer service in any customer-driven endeavor. He has translated his experience effectively to the operations at 901. His staff is uniformly efficient, well informed, and noticeably agreeable. And when they ask whether there was anything you thought should be improved, you get the sense your feedback will actually be taken to heart. While there are some of the inevitable glitches that accompany any opening (timing to the table was a bit off on some visits), there are surprisingly fewer than one might expect in such a new establishment.

All in all, 901 is a welcome new addition to Penn Quarter dining, and yet another testament to the success of von Storch’s approach to business.