Home The Washington Diplomat July 2011 ‘Page One’ Asks If New York Times Can Change With the Times? 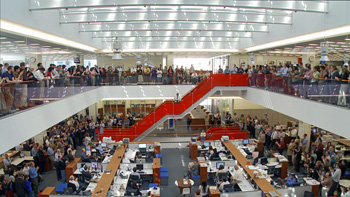 Also See: ‘Vincent Wants to Sea’ and ‘A Better Life’ and Repertory Notes

Andrew Rossi’s revealing documentary “Page One: Inside the New York Times” offers unfettered access to the inner workings of an esteemed newsroom trying to survive in a rapidly changing industry.

American director Andrew Rossi’s revealing documentary “Page One: Inside the New York Times” succeeds because of its largely unfettered access over one year to the inner workings of a newsroom, particularly the media desk of the New York Times. These days, daily newspapers are struggling to survive, many going bankrupt amidst the media revolution unleashed by the Internet. Casualties, to varying degrees, include the Boston Globe (owned by the parent company of The Times), the Tribune Company and the Seattle Post-Intelligencer. The Times is not immune to these external societal pressures despite its prominence as the perennial paper of record of the United States.

Indeed, that long-time position of strength may be inhibiting the Times from making the changes necessary to survive in the future media landscape. Today, the Gray Lady is truly showing her age, epitomized by a scene in which writers are working in WordPad on old PCs. And even her esteemed reputation has been damaged by scandals, notably the fictitious news stories made up by Jayson Blair and the incorrect reports of weapons of mass destruction in Iraq written by Pulitzer Prize-winning journalist Judith Miller.

The documentary is especially timely given the recent naming of Jill Abramson as the Times executive editor, the first woman to hold the position, and Dean Baquet as managing editor, prompting speculation on what direction the venerable 160-year-old paper will take under its first female editor.

“Page One” though focuses mostly on four journalists. A major hero is outspoken media reporter David Carr, a former chronicler of the Oscars who has long examined the media industry’s intersection with culture, business, and government. Young Turk Brian Stelter started off as an unknown blogger who was hired by the Times at 21, rising to fame covering and interviewing WikiLeaks founder Julian Assange. Another rising young star, Tim Arango, made a rapid climb from risky war coverage to becoming the chief of the news bureau in Baghdad. Meanwhile, media desk editor Bruce Headlam strives to keep all the chaos in some semblance of order.

In the documentary, spirited debates take place over the future of the Times, including an impending “pay wall” for online access (which has now been implemented), as well as day-to-day matters regarding stories. Despite the increasingly challenging environment in which they work, the top reporters at the Times continue to churn out quality, respected journalism that they hope continues to benefit the public good. Yet a stable — let alone profitable — future is far from certain. Knowing he’ll only be writing another decade or so, Carr glibly quips, “Have fun figuring it out.” 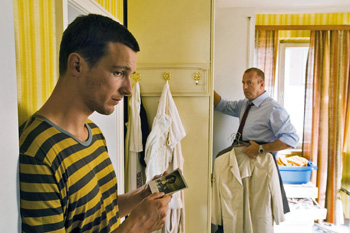 As a man suffering from Tourette syndrome, Florian David Fitz, left, is sent to a rehabilitation clinic by his father in “Vincent Wants to Sea.”

German director Ralf Huettner’s “Vincent Wants to Sea,” written by Florian David Fitz, who also stars in the title role, manages to be a sensitive portrayal of a man suffering from Tourette syndrome while providing plenty of belly-aching laughs. The German title, “Vincent Will Meer,” is also a play on words with “Vincent Wants More.” Certain scenes recall situations in two other fine movies from the late 1990s about Tourette’s patients, Gary Winick’s “The Tic Code” (starring Gregory Hines) and Bob Gosse’s “Niagara, Niagara” (starring Robin Tunney and Henry Thomas).

Vincent Gellner (Florian David Fitz) is a young man who struggles with the socially awkward symptoms of Tourette syndrome. After his mother’s death, his father Robert (Heino Ferch), a determined politician seeking public office, is overwhelmed by the demands of the campaign combined with taking care of his now motherless son. Robert sends his son to a rehabilitation clinic where he’ll be taught to better keep his spontaneous verbal expressions and physical tics under control. At the clinic, Vincent’s roommate is Alexander (Johannes Allmayer), an obsessive-compulsive patient with a penchant for stolen cars, fine clothes, and the esteemed German classical composer Johann Sebastian Bach. The role of Vincent’s tour guide around the clinic is assumed by Marie (Karoline Herfurth), a spirited anorexic with a sense of adventure.

In the beaten vehicle owned by the clinic’s Dr. Rose (Katharina Müller-Elmau), the trio of misfits escapes the confines of the clinic to embark on a madcap road trip — oblivious to the mayhem they create along the way. They’re headed down the autobahn to the Mediterranean Sea, where Vincent intends to honor his mother’s dying final wish and scatter her ashes. Meanwhile, Vincent’s father Robert and Dr. Rose chase them in hilariously futile pursuit. For example, after the trio is discovered, they manage to abandon Dr. Rose’s jalopy and take over Robert’s shiny new black BMW to continue their journey.

Along the way, Vincent, Robert, and Marie become close friends as they touchingly talk about the difficulties of their diseases. Despite their vast differences in background, Robert and Dr. Rose are forced to work with each other. And though there is, in the end, no Hollywood-style happy ending, Vincent and Robert at least come to understand each other. 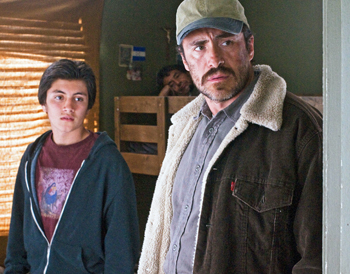 Successful American director Chris Weitz (“About a Boy,” “New Moon,” “The Golden Compass”) goes small with “A Better Life.” Weitz’s surprisingly intimate feature won’t draw the big crowds of his mainstream movies, but it will be a special treat for discerning moviegoers. The personal story of “A Better Life,” written by Eric Eason, provides an authentic glimpse at the harsh reality of life for an undocumented immigrant in the contemporary United States.

In the touching tale, single father Carlos Galindo (Mexican star Demián Bichir), an illegal immigrant in East Los Angeles, struggles to eke out a living, dodge immigration officers and prevent his teenage son Luis (José Julián) from being sucked into gang life. Since his wife abandoned the family, Carlos has raised his son alone, supporting the family by working as a helper to a gardener with a brisk business. One day, his employer decides he wants to return to Mexico. The boss offers to sell his truck and gardening tools to Carlos, leaving him with his fat portfolio of clients as well.

But a big problem — one that recurs frequently — is that Carlos lacks a driver’s license, so he risks deportation anytime he is pulled over. Furthermore, he doesn’t have the money to buy the truck, though that obstacle is overcome when his sister loans him the funds. Sadly, cruel fortune steps in when the truck is stolen on Carlos’s very first day as its owner, depriving him of his livelihood.

So the father and son, a reluctant companion, embark on an epic quest — reminiscent of Vittorio De Sica’s Italian neorealist classic “The Bicycle Thief” — searching for the poor man’s stolen truck, paid for with borrowed money, that he needs to make a living as a gardener. Father and son, who are nearly strangers in practice, bond and learn a lot about each other as they travel through the poor neighborhoods of Los Angeles.

More often than not, this subtle interaction takes place rather wordlessly. The non-verbal communication is capably illustrated by the setting of verisimilitude created under assured direction by Weitz and enlightening cinematography from Spanish director of photography Javier Aguirresarobe. The absorbing mise-en-scène is enhanced by revealing production design by Missy Stewart and an appropriately minimalist score with Latin-infused flavors from veteran French composer Alexandre Desplat.


“Alfred Hitchcock Retrospective, Part III” (July 2-Sept. 5) continues the massive comprehensive review of the British master of suspense. “Elizabeth Taylor: A Screen Remembrance” (July 1-Sept. 6) looks back at the legacy of the beloved, beautiful British actress. “Totally Awesome 5: Great Films of the 1980s” (July 1-Sept. 7) revisits memorable flicks from the ’80s, including “Time Bandits” and “The Adventures of Baron Munchausen.” “Keeping Up With The Coen Brothers” (July 1-Sept. 5) provides a retrospective of the American auteurs of black humor. “Arthur Penn: A Screen Remembrance” (July 8-21) shows work by the distinguished American director, whose 1967 classic “Bonnie and Clyde” (July 8-12) was influenced by the French New Wave. “Blake Edwards: A Screen Remembrance” (July 15-Aug. 7) showcases early films by the American director. “Dennis Hopper: A Screen Remembrance” (July 2-Sept. 8) brings us back through the career of the iconic American actor. “NIH Science in the Cinema” (July 6-Aug. 10) features free DVD screenings, discussed by an expert guest, relating to alcoholism, stuttering, the obesity epidemic, schizophrenia, suicide prevention and meurosurgery.